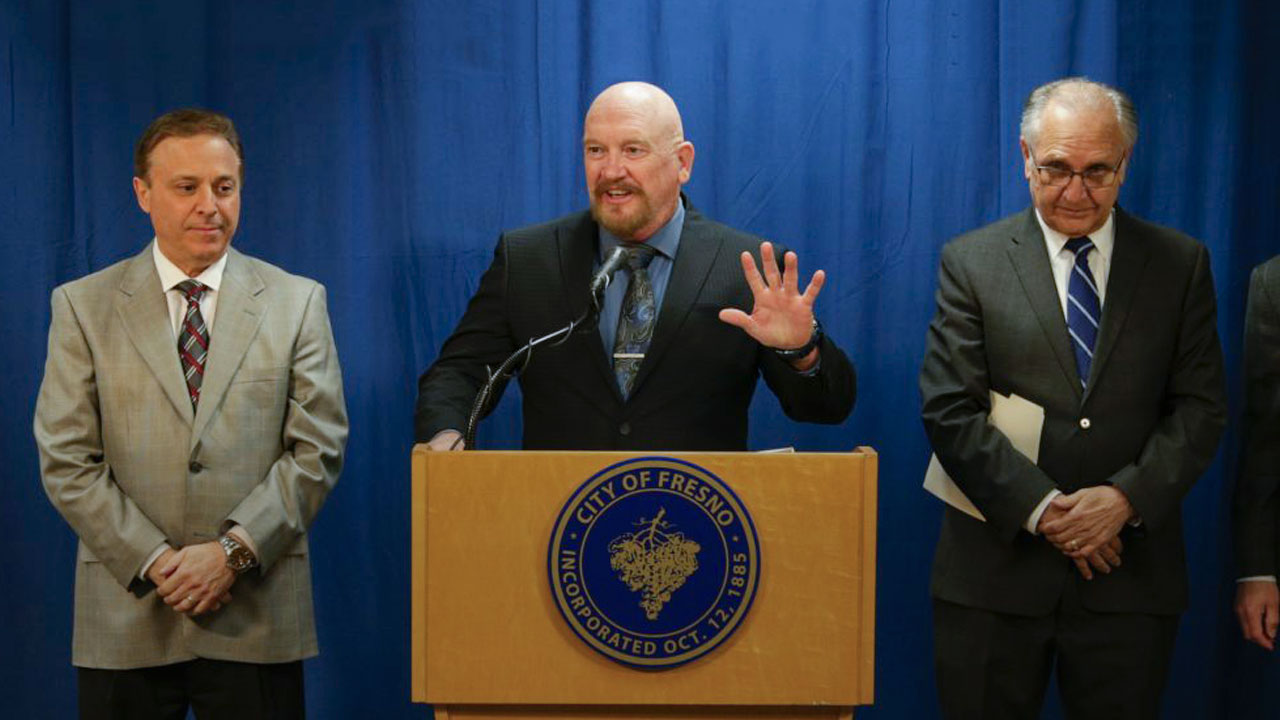 Fresno’s system that uses computers to detect and fine water wasters may be DOA after only 31 days.
Water violation notices sent to customers went up 25 fold since the city implemented its plan to monitor residential users automatically on Oct. 1. Complaints went up at nearly the same rate.
In fact, complaints increased so much so fast, the city couldn’t keep up with resolving issues.
Thus, the city council, at the behest of members Steve Brandau and Garry Bredefeld, will convene a special meeting on Thursday (Nov. 1) to place a moratorium on fines.
Coincidentally, that is the same day that the city’s residential water schedule goes from two to one day a week.

Mayor Lee Brand joined the councilmen at a Tuesday (Oct. 30) session with the media, explaining what went wrong, and their attempt to make things right.
“The bottom line is we need to work with our citizens to preserve water and not piss them off with excessive fines,” Brandau put it bluntly. “We, the city, have somewhat dropped the ball on this issue. We can do better and we will do better.”
More troubling, Bredefeld felt, is that complaint calls to the city aren’t being returned. Both he and Brand called it unacceptable.
“This is apparently a very flawed policy we have going on right now. And, that’s a problem,” Bredefeld said. “The council really needs to dig deep in this to make sure this policy is fair, equitable, people understand it; clearly that is not happening right now.”
Brandau said the moratorium would be retroactive to October. If fines were already paid, they would serve as a credit on a future bill.
Bredefeld also feels this is an issue of due process, fairness for those accused of violations.
“People aren’t getting timely responses from the city of Fresno. That is the problem.”
Council passed the latest water standards in Oct. 2017, limiting household use to less than 300 gallons an hour on non-watering days. Any more would be a violation, with the first notice being a warning; second a $50 penalty; third a $100 penalty and fourth or more a $200 penalty.
The bill passed 6-0, with both Bredefeld and Brandau supporting.

According to Brand, under the old visual inspection system, the city would have sent out 1,000 violation notices. Under the automated program, more than 27,000 notifications have been issued. He compared it to a cop writing speeding tickets to motorists going 10 miles over the limit then suddenly issuing violations for going one mile per hour over the limit.
“Our current water policy has created great concern with the residents. I concur with my council members that question the fairness of the violations. Customers have a right and deserve a timely response. We need to suspend automatic fines until city staff can fairly address customer service concerns,” Brand said.
The mayor said he didn’t foresee the overwhelming number of complaint calls the city has received. The city issued 16,000 waivers, giving reprieves to residents who have automatic pool filters, for instance. Brand wants to focus on gross violators, such as someone watering their landscaping every day.
Brand also wants to reconsider the city’s current 300-gallon threshold that triggers a fine.
“The city’s goal is not to fine. It’s to fix things,” he said.

When the Fresno city council agreed to enter a pilot program to test ways residents’ use water, some skeptics called it “Big Brother.”
The city partnered with researchers at the University of Chicago to establish multiple tiers of permissible water usage, fine levels and monitoring methods to determine which combination would be most effective in encouraging conservation.
The three-month program lasted July through September. Results are in, but still being analyzed. Brandau hopes to have answers and possible solutions by January.
[Update, 11/01/18: Council voted unanimously, 7-0, to enact water fine moratoriums retroactive to Oct. 1. Council will convene again on the subject in January. Council also instructed city staff to inform the public about the moratorium.]
[Correction, 10/31/18: the water standard council set was less than 300 gallons per hour, not per day].

Whitey Bulger Slain in Prison. Check Out Photos Through the Years.