Ronald Reagan is Back on the Campaign Trail ... As a Hologram 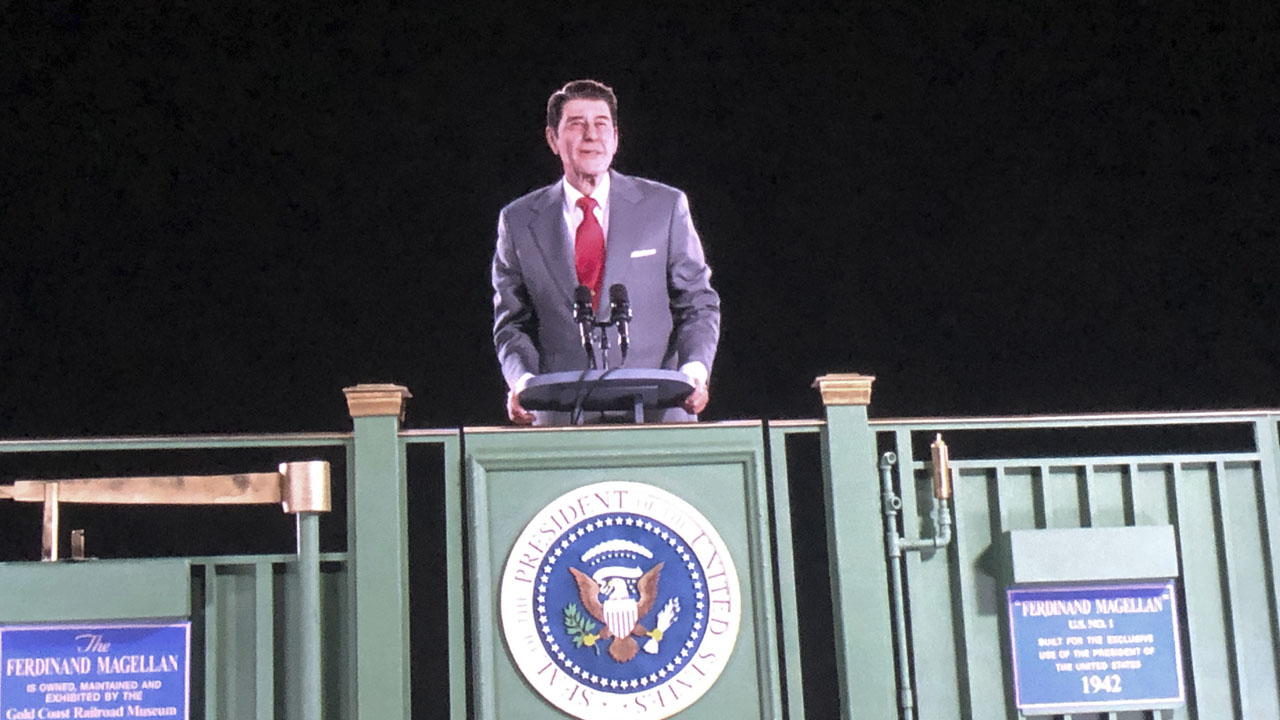 SIMI VALLEY — A characteristic twinkle in his eye, Ronald Reagan waves to a crowd from aboard a rail car in a hologram revealed Wednesday at the late president’s namesake library in Southern California.
“We think we made a good beginning, but you ain’t seen nothin’ yet!” the digital resurrection of the nation’s 40th president says in his steady voice as a flurry of balloons falls in front of him.
Reagan, who died in 2004 at age 93, was speaking about the nation’s future during a 1984 campaign stop but easily could have been referencing the technology that brought him back to life in 2018. The audio used is edited from his real remarks.
“We wanted to make President Reagan as lifelike as possible,” said John Heubusch, executive director of the Reagan Foundation. “It’s a stunning experience.”
In two other holograms, Reagan appears in a suit and tie inside the Oval Office and in horseback riding pants, carrying a lasso alongside his dog, Victory, at his beloved ranch. All three holograms will be on display to visitors of the Ronald Reagan Presidential Library, west of Los Angeles, starting Thursday.
They will be shown in a specially designed room that will be the first stop for guests. Seats are set up in front of a stage, and a curtain opens up to thunderous applause at Reagan’s campaign stop more than three decades ago.

The computer-generated imagery for the holograms was created starting with a silicone cast of Reagan’s head that was photographed from various angles with 300 cameras. His head was then digitally “placed” on the body of an actor portraying the president with full costumes and backdrops for the three scenarios.


“We wanted to make President Reagan as lifelike as possible. It’s a stunning experience.” — John Heubusch, executive director of the Reagan Foundation
Reagan’s face comes to life via specific movements of the mouth, nose, eyes, cheeks and hairline, all manipulated by computers.
The library worked with the same special-effects technicians who helped bring singers like Michael Jackson, Billie Holiday and Roy Orbison back to life on stage.
The Hollywood firm Hologram USA helped create the holograms and the stage on which they’re projected. 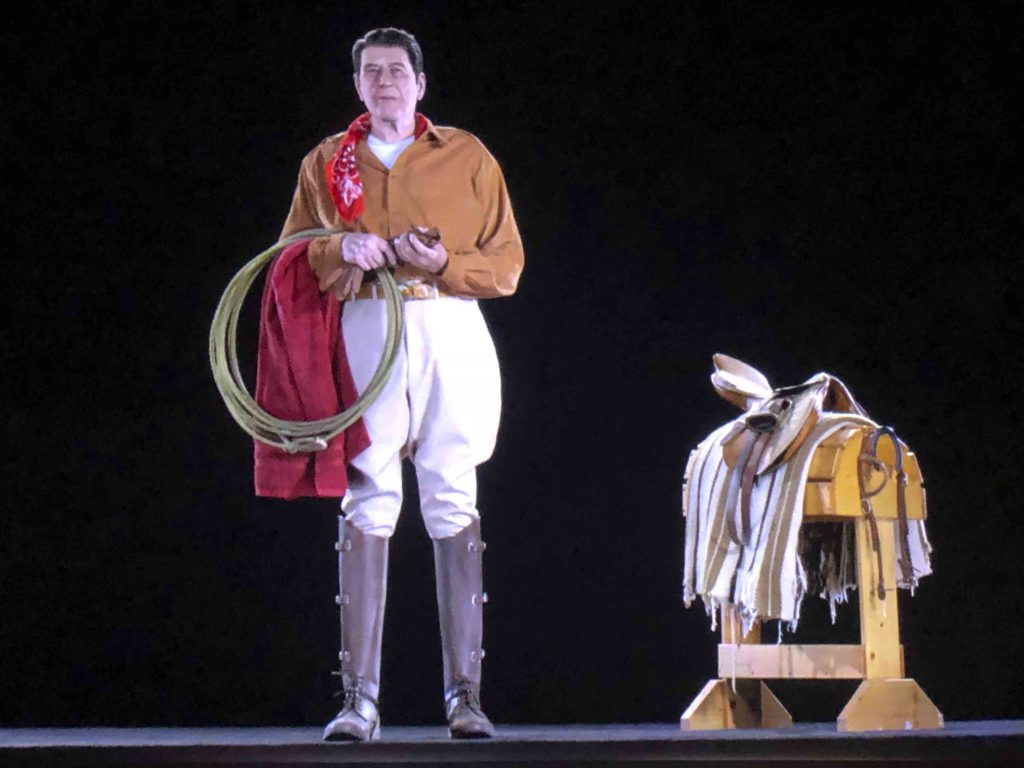 Former President Ronald Reagan appears in western attire, as he might appear at his Santa Barbara ranch, but as a hologram, on display at the Ronald Reagan Presidential Library in Simi Valley, Calif., Wednesday, Oct. 10, 2018. The Reagan Library says it worked with the same Hollywood special effects wizards who helped bring singers Michael Jackson, Maria Callas and Roy Orbison back to life on stage. Officials say the goal is to allow visitors to see Reagan back in the Oval Office, campaigning or at his beloved ranch. (AP Photo/Amanda Lee Myers)

As a radio host, television star and movie actor, Reagan understood and appreciated new technologies, company senior vice president David Nussbaum said.
“He always thought many steps ahead,” he said. “If he was looking down right now on this project, I think he would give us his seal of approval. I think he would totally get this and support it.”
Seeing her former boss “almost in the flesh” was “a little eerie, but at the same time, very comforting,” said Joanne Drake, who served as Reagan’s chief of staff after the Republican left office following his two terms from 1981 to 1989.
“It’s fun to think that he’s standing in front of us,” said Drake, who’s now chief administrative officer for the foundation. “Intellectually, you know it’s not him standing there, but you see his facial movements and his arm movements and his body and that twinkle in his eye and that little grin that he always got, and it makes you remember really what he brought to the office.”
Drake said future plans could include bringing the holograms on the road.
“I do think we’re going to see Ronald Reagan back in Washington, D.C.,” she said.