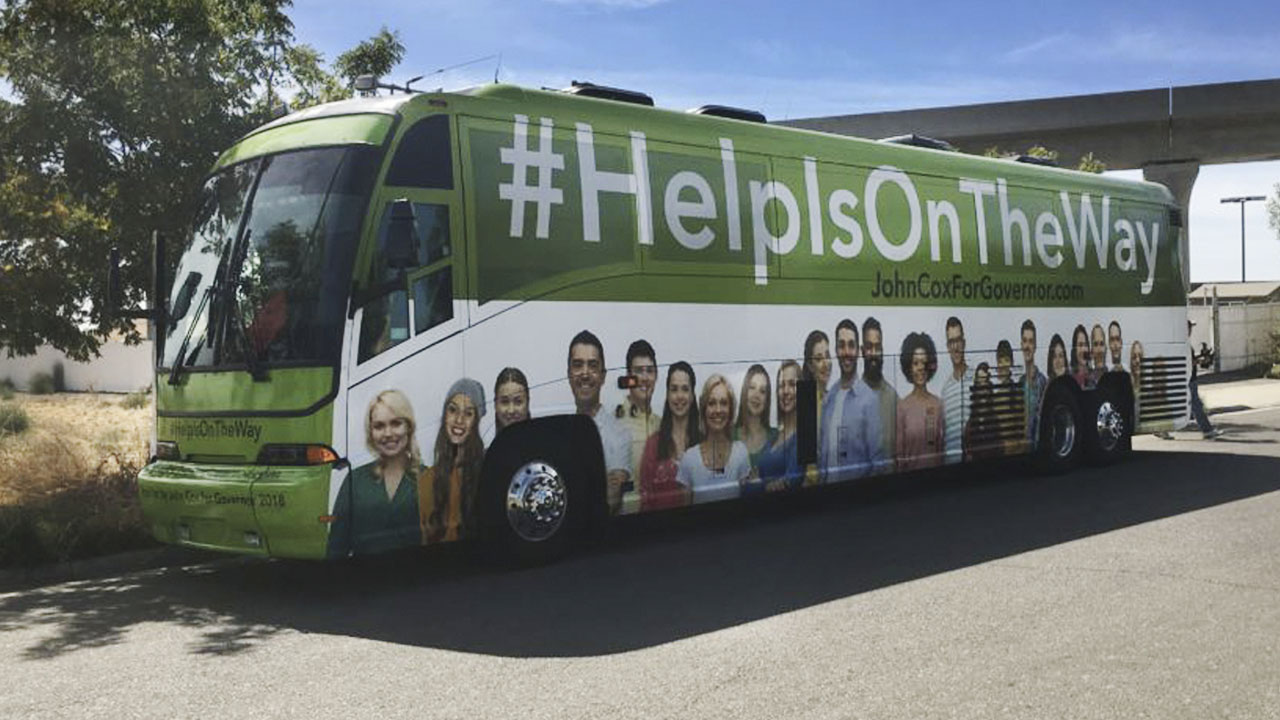 Cox, the Republican candidate, met with Sheriff Margaret Mims, taking a tour of a jail program. Then, his bus rolled to south Fresno, underneath an under-construction high-speed rail overpass.
He echoed familiar themes from the campaign.
“This (pointing to the overpass) is a monument to corruption and mismanagement and unproductive spending,” Cox said of HSR. “The technology for this train is obsolete.”
The Rancho Santa Fe businessman received good news from the latest PPIC poll. Even though it showed Newsom with a 12-point lead that is half of the 24-point lead he had in the same July poll.
“It shows we’re surging. We’ve slashed the difference in half. There are other polls that show it within three or four points,” Cox said. “I think this race is pretty much a dead heat at this time.”
Cox also bashed Newsom for his liberal record and support group.

TJ Cox, mostly on the defensive this week, went on the offense with his latest campaign TV ad.

He accuses his opponent, Rep. David Valadao (R-Hanford) of voting with President Donald Trump 99% of the time.
Of course, Trump doesn’t vote, so how did the campaign make the assertion?
They used a metric developed by Nate Silver’s FiveThirtyEight. Simply put, they matched Valadao’s congressional votes with public positions the White House has taken.
According to the score, Valadao only disagreed with Trump once: a 2017 vote in favor of imposing sanctions on Russia, Iran, and North Korea.
For comparison with the rest of the Fresno delegation, Rep. Devin Nunes (R-Tulare) also achieved a 99% rating and Rep. Jim Costa (D-Fresno) scored a 48%.

The ALRB certified the vote count Thursday for the 2013 union election in which Gerawan Farming workers decertified the UFW as representatives.
The ballot counting took place Sept. 18 in front of a public audience in Fresno. The tally showed 1,098 workers voted no union and 197 chose to keep the UFW.
In its decision to certify, the ALRB found that allegations that Gerawan’s behavior before the election, including giving raises to employees seven months prior to the vote, did not unlawfully influence the result.
“I cannot believe what just happened today. The ALRB certified our votes and results. I am speechless and beyond excited and happy because justice was finally done,” Gerawan employee Silvia Lopez said in a statement. She was one of the driving forces behind the decertification.
Unsurprisingly, the UFW bristled at the decision.
“The ALRB failed to protect farm workers’ most basic democratic right: the right to vote in a free and fair election without being cynically coerced and manipulated by their employer. The ALRB is still obligated by law to consider Gerawan’s numerous blatant violations of the law in determining whether the election was valid,” said Armando Elenes, the group’s third vice president.
Elenes said the certification contradicted previous ALRB rulings.
“This ALRB decision tells employers they can get away with repeated and serious lawbreaking,” she said. “Gerawan workers will be disappointed that they will not be paid the more than $10 million in back pay and benefits the company already owes them under the union contract the ALRB ordered Gerawan to implement.”
[tnc-pdf-viewer-iframe file=”http://www.gvwire.com/wp-content/uploads/2018/09/ALRB-decision-on-UFW-certification.pdf” width=”700″ height=”800″ download=”true” print=”true” fullscreen=”true” share=”true” zoom=”true” open=”true” pagenav=”true” logo=”true” find=”true” current_view=”true” rotate=”true” handtool=”true” doc_prop=”true” toggle_menu=”true” language=”en-US” page=”” default_zoom=”auto” pagemode=””]