This Is the State Senate Race All of California Is Watching 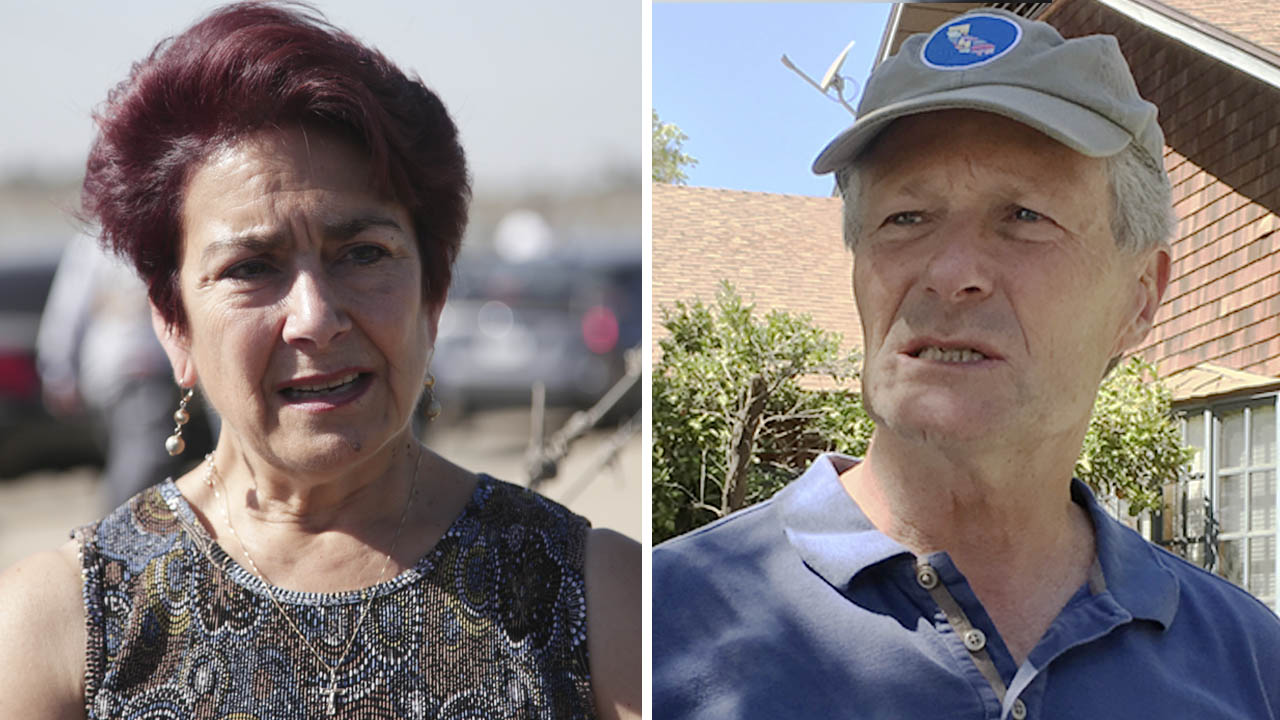 The state GOP has a lot riding on Madera County Supervisor Rob Poythress’ run for state Senate.  Keeping the 12th District seat in Republican hands is crucial to the party’s effort to prevent a Democratic supermajority in California’s upper chamber.
Democrats are just as motivated to flip the seat blue, with the demographics of the sprawling district seeming to favor Salinas Assemblywoman Anna Caballero in the race to replace termed-out incumbent Anthony Cannella (R-Ceres).


“Voters there will be at ground zero and subject to millions of dollars in campaign spending.” — Rob Stutzman, a Republican strategist

It has become the most expensive state Senate campaign in the current election cycle.
“Given the remote odds of flipping any of the Democratic-held seats, it’s been apparent for quite some time that SD-12 was going to serve as the CA GOP’s last stand as far as retaining the ability to block a complete Democratic supermajority,” said Rob Pyers, research director with the California Target Book.
Of the 40 state senators right now, 26 are Democrats and 14 are Republican. Assuming none of the other 20 seats in play flip, a Democratic win in SD-12 would give the party 27 votes, or a two-thirds supermajority. That would enable Democrats in the state Senate to pass taxes and constitutional amendments without needing any cross-party votes.

Both Poythress and Caballero are familiar to voters in the district, which covers parts of western Fresno County as well as five other counties. 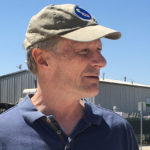 Rob Poythress
The district has been turning bluer over the last few years. Democrats have a 19-point voter registration advantage (46% to 27%, with 22% indicating no party preference). Latinos make up nearly half the voters (49%).
In the 2014 election in which Cannella won re-election, Democrats enjoyed a 14-point voter registration margin. Still, Republican turnout was stronger. According to the California Target Book, GOP registrants voted at a 49% clip in the 2014 general election, compared to 40% Democratic and 28% no party preference turnout. 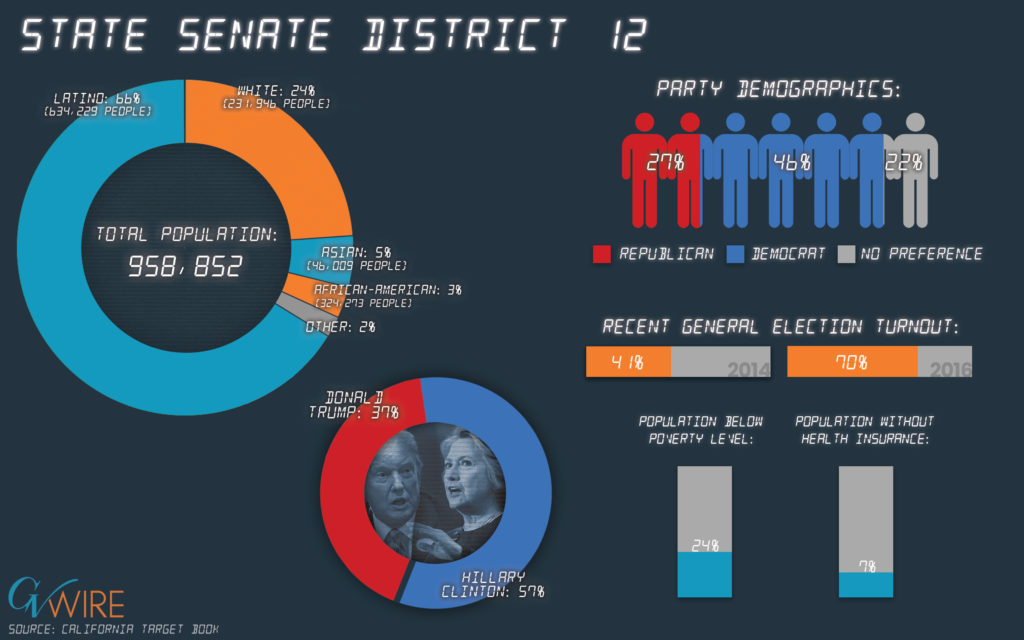 Donors clearly see the SD-12 race as important. Noted Republican strategist Rob Stutzman recently wrote in The Sacramento Bee, “Voters there will be at ground zero and subject to millions of dollars in campaign spending.” 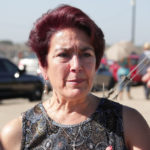 Anna Caballero
Through Sept. 18, Caballero raised $1.8 million while Poythress raised nearly $962,000. The state parties are among the largest contributors: $658,000 from the Democrats and $361,000 from the Republicans.
Third parties are also spending on the campaign. Two PACs have donated $180,000 in support of Poythress — one representing the oil industry and the other known as JOBSPAC. The Govern for California Action Committee has spent $8,600 in support of Caballero.

Political observers and party chiefs are quick to affirm the importance of SD-12.
“Holding a two-thirds majority is essential to getting things done in California,” said Michael Evans, chairman of the Fresno County Democratic Party. “Otherwise, the minority party can obstruct forward progress for our state.”
“The Republicans are clearly worried about SD-12,” Evans said. “Anna is an excellent candidate in a district that is increasingly Democratic. She represents our future.”
Republican state party chair Jim Brulte said preventing a Democratic supermajority is his priority.
“Holding every seat is important because it denies Sacramento Democrats the ability to continue raising taxes. But more importantly, Rob Poythress has an excellent record on public safety, adding police officers in Madera County to fight gangs and drugs, while Anna Caballero’s criminals-first agenda helped turn Salinas into the ‘Youth Murder Capital of California.’ So yes, this is a very important election.” 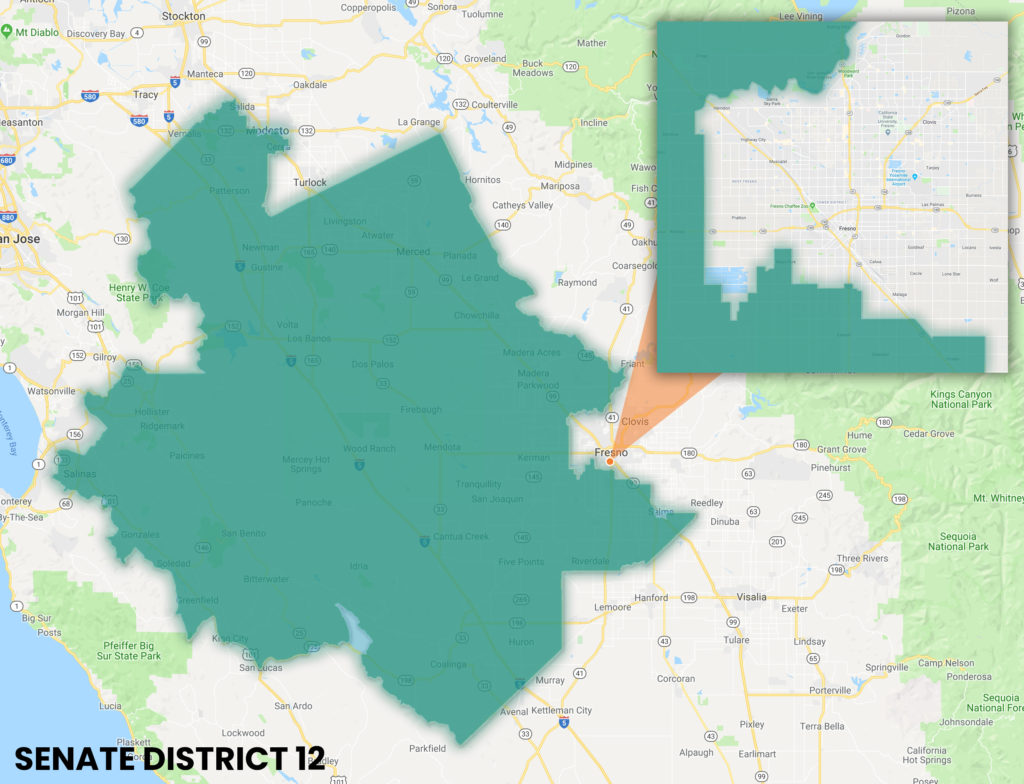 Veteran Sacramento columnist Dan Walters emphasized the importance of the race in a recent piece for CALmatters:
“This time around, it might really mean something. The man likely to be the next governor, Democratic Lt. Gov. Gavin Newsom, has hinted that he wants to do big and expensive things, such as universal health care, that would require major new taxes.”

Though a supermajority clearly makes passing legislation easier, Democrats and Republicans don’t always vote in lock-step.
A prime example is SB1, the controversial bill to increase gas taxes to fund road repairs in California. That bill, which boosted fuel taxes 12 cents a gallon and increased vehicle license fees, would not have passed without the support of at least one Republican senator.
In that instance, Democrat Steve Glazer opposed the bill, leaving it one vote short of the number needed for passage.
The Republican who voted yes was Sen. Anthony Cannella.

May I Please Have a Straw for Me & a Soda for the Kid?