“We get him elected into office and he pulls us out of trade agreements,” Dube said last week as local farmers gathered to hear Democratic House candidate Lisa Brown.

Dube says China is buying less wheat from eastern Washington farmers and Trump’s policies have opened the door for Australia and Canada to wrestle away business. His frustration extends to his congressional representative, Rep. Cathy McMorris Rodgers, who is the highest-ranking Republican woman in the House and running for an eighth term.

The U.S. tariffs on agriculture products, sown by Trump, have grown into an election-year threat to Republicans in rural districts that are heavily reliant on exports for their economy. With the livelihoods of farmers at risk, opposition to the tariffs could make a difference in some races and help determine which party takes control of Congress. 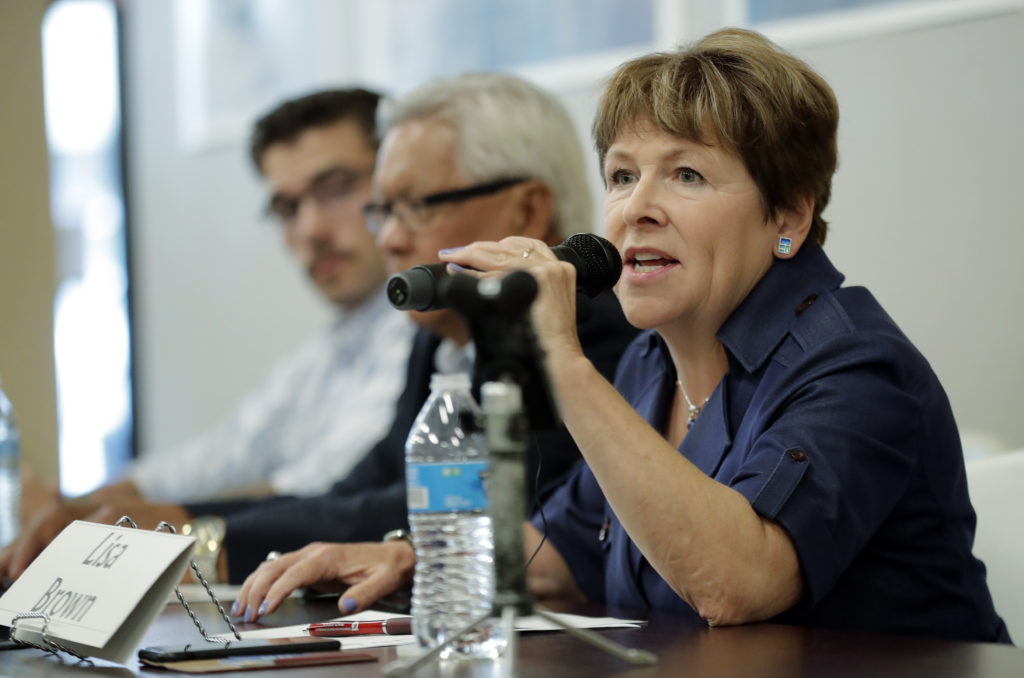 FILE – In this July 17, 2018, photo, Lisa Brown, the Democratic opponent to Rep. Cathy McMorris Rodgers, R-Wash., speaks during a candidates forum in Colfax, Wash. Some Democratic candidates are determined not to let Republican members of Congress distance themselves from the president’s trade policies.  (AP File Photo/Ted S. Warren)

McMorris Rodgers has made it clear she opposes the president’s actions on tariffs, but so far, the Republican-controlled House has not taken up legislation to block them. Democrats characterize GOP lawmakers as unable or unwilling to check Trump, who has declared that “tariffs are the greatest.”

“My opponent, though she would say she’s concerned and talking to the administration about these issues, she’s still mostly a cheerleader for the president,” said Brown.

Facing what appears to be the tightest re-election race of her career, McMorris Rodgers is emphasizing that she has encouraged the president to “move from tariffs to agreement.”

“I have made it very clear that I don’t support the across-the-board tariffs, that we should take a more targeted approach,” McMorris Rodgers told The Associated Press.

Polls show her slightly ahead of Brown, a former state Senate majority leader and university chancellor. In addition to the challenges raised by Trump’s tariffs, McMorris Rodgers is dealing with controversy arising from a fund-raising visit by House Intelligence Committee Chairman Devin Nunes of California.

Like McMorris Rodgers, Nunes faces his toughest re-election campaign to date in a district with an ag-dependent economy. Democratic challenger Andrew Janz, though, has focused more on Nunes’ ties to corporate donors than on Trump’s tariffs.

Clues that the president’s trade policies will play a role in the November midterm elections can be seen in Agriculture Secretary Sonny Perdue’s travel schedule. Over the past few months, he’s been to Eastern Washington to join McMorris Rodgers in meeting with farmers.

Perdue has also been to California’s Central Valley to meet with farmers in the districts of Republican Reps. Jeff Denham and David Valadao. He additionally went to Iowa, where Republican Reps. David Young and Rod Blum are both in close races. 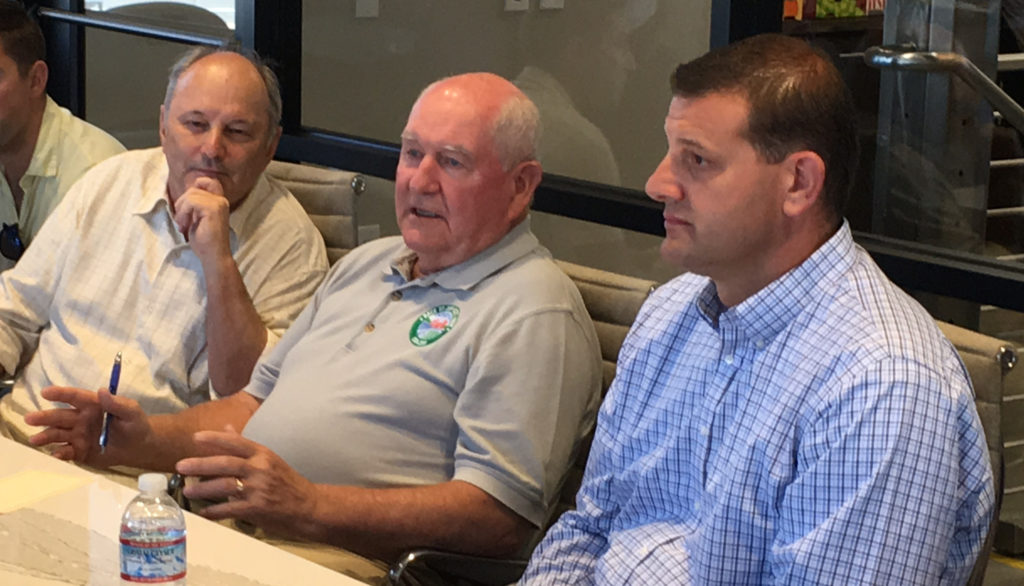 The battle for the Senate could also be affected by the tariff issue, particularly in North Dakota, Indiana, and Missouri, where Republicans hope to knock off three Democratic incumbents.

The president has tried to allay farmers’ concerns with an aid package of up to $12 billion to help them weather the trade war.

“But antagonizing our trading partners is not the way to do it,” said Smith, who emphasized that he is not a Democrat. “I’m an American.”

Aaron Flansburg, who runs a diversified farm near Pullman, Washington, said he’s skeptical the tariffs will change the way most farmers vote, though.

“Farmers often vote for Republicans,” Flansburg said. “Whether that will change, I have my doubts.”

Will Voters Give Trump More Time to Negotiate Trade Deals?

McMorris Rodgers said it’s her sense that voters are willing to give the president time to negotiate better agreements.

“Yes, there’s a lot of uncertainty. There’s a sense that we need to get these trade agreements into place as soon as possible, but there’s also a recognition that for too long America has not taken action, especially against China,” she said.

The United States is scheduled to slap tariffs on $200 billion in Chinese imports Monday, adding to the more than $50 billion worth that already face U.S. import taxes.

China retaliated with its own tariffs on U.S. products. The world’s two biggest economies are clashing over allegations that China steals technology from American companies.

Overall, about 6 in 10 Americans disapprove of how the president is handling trade negotiations with other countries.

Farm groups have testified in congressional hearings that retaliatory tariffs increase the cost of their products for customers abroad, giving foreign competitors an edge.

“The current tariffs, continuing back-and-forth retaliatory actions and trade uncertainties are hitting American agriculture from all sides and are causing us to lose our markets. Once you lose a market, it is really tough to get it back,” said Kevin Paap, president of the Minnesota Farm Bureau.

Rep. Ben Ray Lujan, who is overseeing Democratic efforts in House races, pointed to Iowa as a state where he believes the administration’s tariffs could backfire. He said primary turnout was up, in part because small family farmers and the businesses they buy from are worried. “I really believe that in those districts, you’ll see people come forward and hold everyone accountable not standing up for them,” Lujan said.

GOP lawmakers from Iowa, including Young and Blum, signed onto a letter calling on the president to act quickly to save rural economies. Blum also wrote Trump separately urging him to “consider the consequences tariffs have on American manufacturers.”

When the president visited Blum’s district a few days later, he thanked him for his “political courage” on trade.

“You’ve taken some heat for it in the short term, but in the long run, the farmers, the manufacturers, the employers are all going to be better off,” Blum told the president.

His Democratic challenger, Abby Finkenauer, has seized on that thank you.

“There is no way he should stand there and thank the administration for throwing the livelihoods of Iowans in flux,” Finkenauer said.

Republicans are putting their faith in the economy.

Rep. Tom Cole of Oklahoma said that he personally views tariffs as damaging in the long term but that it’s not an issue that constituents bring up.

“As long as the economy overall is doing well, it’s hard to see losing on tariff issues,” Cole said.