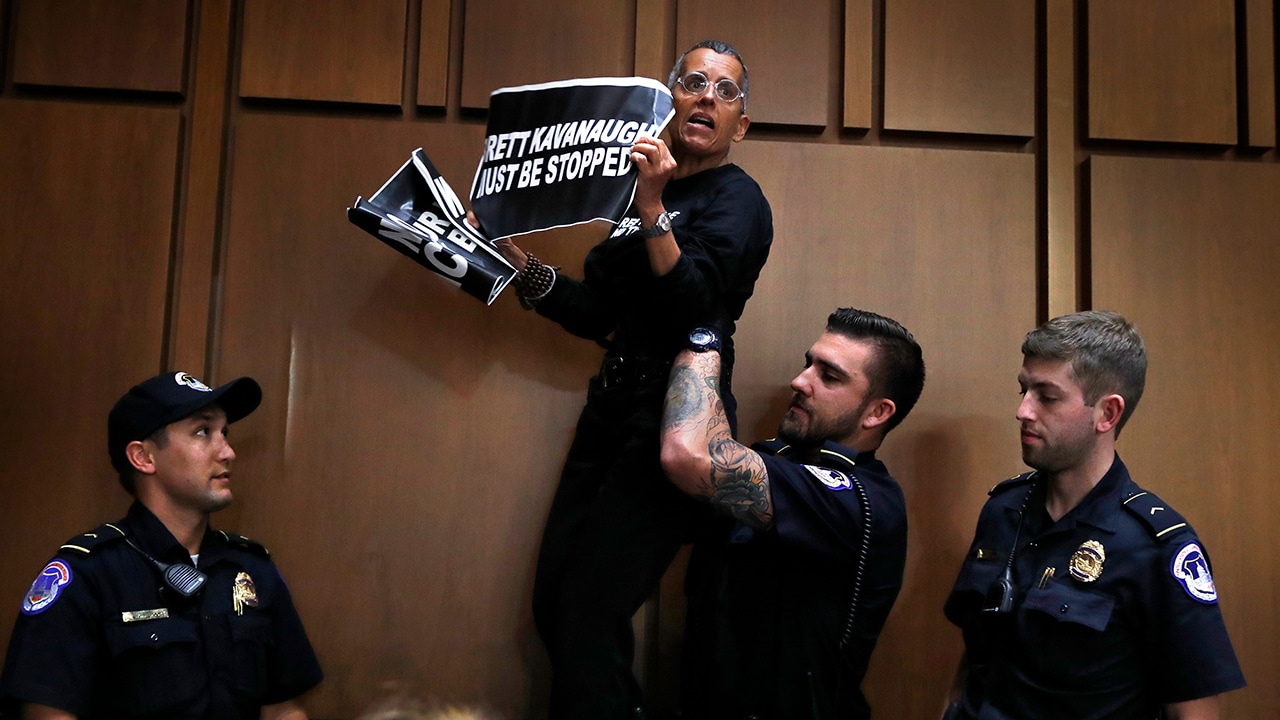 WASHINGTON — Senate Democrats mounted a last, ferocious attempt Thursday to paint Supreme Court nominee Brett Kavanaugh as a foe of abortion rights and a likely defender of President Donald Trump if he makes it to the high court. But their chances of blocking Trump’s nominee seemed to fade away by the end of a second marathon day of testimony in his confirmation hearing.
Questioning of the 53-year-old appellate judge wound down without him revealing much about his judicial stances or making any serious mistakes that might jeopardize his confirmation. In what almost seemed like a celebration, Kavanaugh’s two daughters returned to the Senate Judiciary Committee hearing room for the final hours of testimony, accompanied by teammates on Catholic school basketball teams their father has coached.
The hearing pivoted during the day to Roe v. Wade, the high court’s landmark abortion case. The Democrats’ best hope of stopping Kavanaugh — who could swing the court further to the right for decades — would be branding him as a justice who might vote to overturn the ruling, attracting the votes of two Republican senators who support abortion rights.

The Abortion Case Was Not Settled Law

A newly disclosed email suggested he once indicated the abortion case was not settled law, though Kavanaugh denied in the hearing that he had been expressing his personal views on the issue.

Kavanaugh’s Ability to Separate Himself From Trump

Democrats also hammered at Kavanaugh’s ability to separate himself from Trump and special counsel Robert Mueller’s investigation of Russian meddling in the 2016 election. Throughout his testimony, Kavanaugh has repeatedly insisted he fully embraces the importance of judicial independence.
Democratic Sen. Dick Durbin of Illinois put the focus on Trump, who Durbin said, “has shown contempt for the federal judiciary and has shown disrespect for the rule of law over and over again.”
“It’s in the context of the Trump presidency that we ask you these questions,” Durbin said.
Kavanaugh refused to answer questions about Trump or commit to stepping aside from any case about the Russia investigation that might come to the Supreme Court. When Sen. Richard Blumenthal of Connecticut invited him to denounce Trump’s criticism of federal judges, the nominee demurred.
“The way we stand up is by deciding cases and controversies independently without fear or favor,” Kavanaugh said.

Kavanaugh Seemed to Stumble at First

Earlier, he said his 12-year record as an appellate judge shows that he has not been afraid to invalidate executive branch actions. Kavanaugh said that he has made clear that a court order “that requires a president to do something or prohibits a president from doing something … is the final word in our system.”
Late Wednesday evening, Kavanaugh seemed to stumble at first when questioned by Democrat Kamala Harris of California about whom he might have spoken with at a law firm concerning the investigation into Russian election meddling. The firm in question was founded by Marc Kasowitz, who has represented Trump.
Kavanaugh eventually said he couldn’t think of any such conversations but would need to see a list of the firm’s lawyers. In questioning Thursday, he said more directly that he had no such conversations.
On a separate track, Sen. Patrick Leahy of Vermont and Durbin have led the charge in suggesting that Kavanaugh misled them in earlier testimony, an allegation the nominee firmly denied with the enthusiastic backing of Senate Republicans.
Much of the debate among senators has focused more on the disclosure of documents than on Kavanaugh’s record. 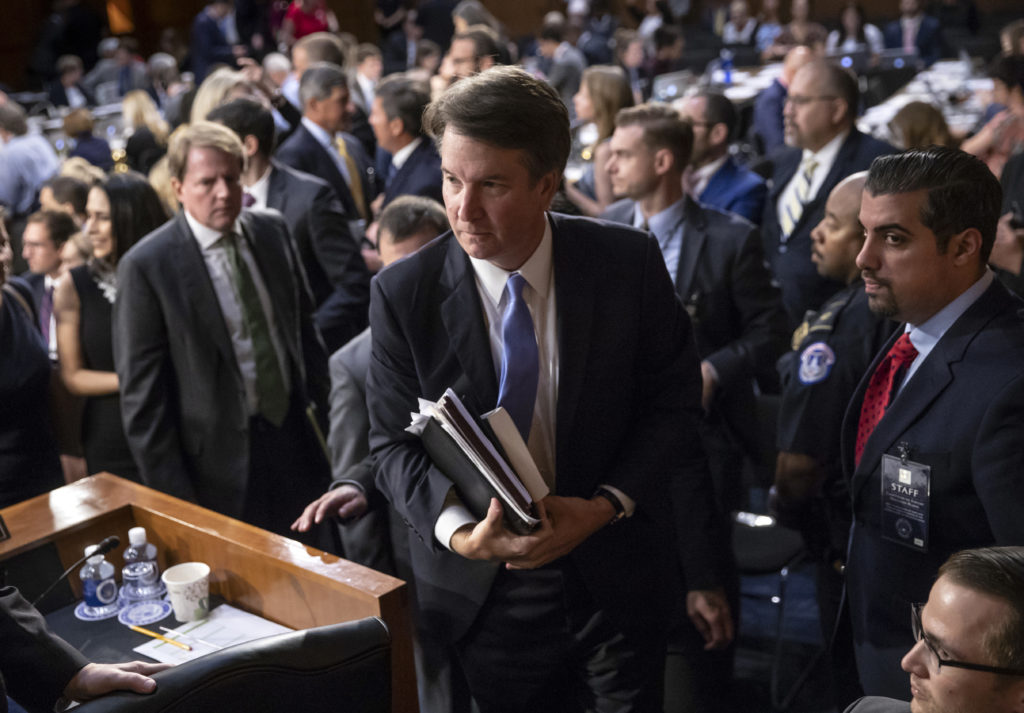 Democratic Sen. Cory Booker of New Jersey, along with Harris — both potential presidential candidates in 2020 — said he was willing to risk fallout over releasing confidential documents about Kavanaugh’s views on race. Republican John Cornyn of Texas warned him that senators could be expelled for violating confidentially rules. Democrats and Booker responded, “Bring it on.”

The document battle stemmed from Kavanaugh’s unusually long paper trail following his years in the Bush White House. The panel’s process resulted in hundreds of thousands of pages of Kavanaugh’s documents being withheld as confidential or kept from release under presidential privilege by the Trump White House.
Chairman Chuck Grassley, R-Iowa, who released more documents Thursday, stood by his handling of the issue.
“My process was fair,” Grassley declared.
Protesters have repeatedly tried to interrupt the hearing, which has carried strong political overtones ahead of the November congressional elections.
Senate Majority Leader Mitch McConnell dismissed the protesters’ “unhinged antics” as powerless to stop Trump’s choice. “There’s no hecklers’ veto,” he said.
Republicans hope to confirm Kavanaugh in time for the first day of the new Supreme Court term, Oct. 1.