The idea of a sixth-grade student at Saroyan Elementary School is changing the way all students drink water at Central Unified.

“I really like to make a change, and I think we succeeded with that.” — Central Unified student Ella Newton

26 Stations To Be Installed

Sonja Dosti, the communications and public relations officer for Central Unified, said 23 stations will be installed at every one of Central’s 23 school buildings, with the remaining three at the district’s offices.

“We are grateful to Kaiser that they are very community minded and give a lot of resources to our district for our students,” Dosti said.

Newton, who is now a seventh-grader at Rio Vista Middle School, said she thought her idea was a good answer to a question posed at her after-school robotics club: What change would you make to fix a problem involving water?

“At first we were thinking of things we could do with the lakes, rivers, and oceans,” Newton said. “But then we decided that we would do something about our schools since our water fountains didn’t work that well.”

In addition, Newton and her peers were concerned about how sanitary the water fountains were.

“I don’t know what was in the water,” Newton said, adding, “some days it would taste different than other days.”

A great day in @CentralUSD where students received an @kpfresno grant to get filtered water stations in all schools. @AlvaradoCentral pic.twitter.com/WWX4aciUd0

“What is great about these filtered-water stations is that you can put your water bottle underneath the spout and then it pours directly into the water bottle,” she said. “That way there is no exchange of germs.”

Newton said she is appreciative of the opportunity to be a part of a positive change: “I really like to make a change, and I think we succeeded with that.”

Victoria Reed, coach of the robotics club, said she couldn’t be happier with what her students accomplished.

“It was a really good experience for them to be able to realize that they can be leaders and they can get something done,” said Reed, a school psychologist at Saroyan Elementary. “This is a big deal for our district and the kids are really proud of the work they did.” 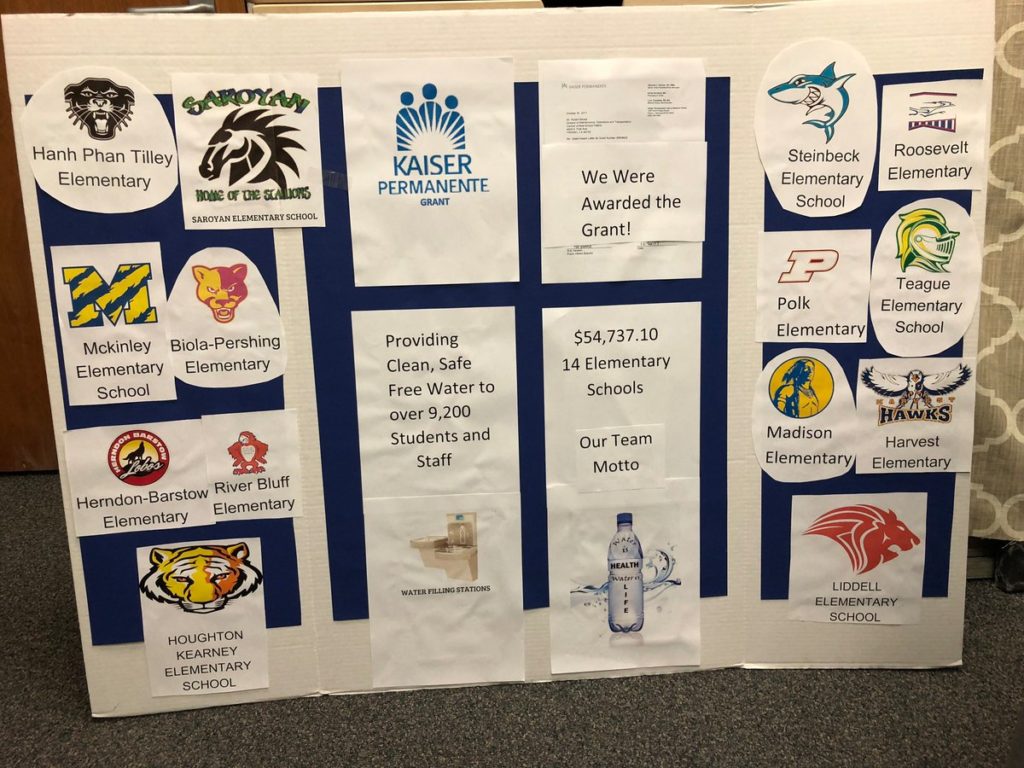 Dosti said several of the filtered-water stations are already up and running and the project should be done by year’s end. She said every station will be located near a cafeteria.

In addition to the filtered-water stations, Dosti said all of Central Unified’s 16,000 students will receive a reusable plastic bottle donated by Kaiser.

“It was a really good experience for them to be able to realize that they can be leaders and they can get something done.” —Victoria Reed, coach of the robotics club at Saroyan Elementary.

“That is good from an environmental perspective because it is teaching kids about recycling,” Dosti said.

Central Unified Superintendent Andrew Alvarado said he is pleased with securing the grant for the water stations.

“We are super excited about the partnership and the opportunity to access the grant through Kaiser Permanente,” he said.

Newton said she can’t wait until the filtered-water stations are installed at her middle school.

“I am really excited.”