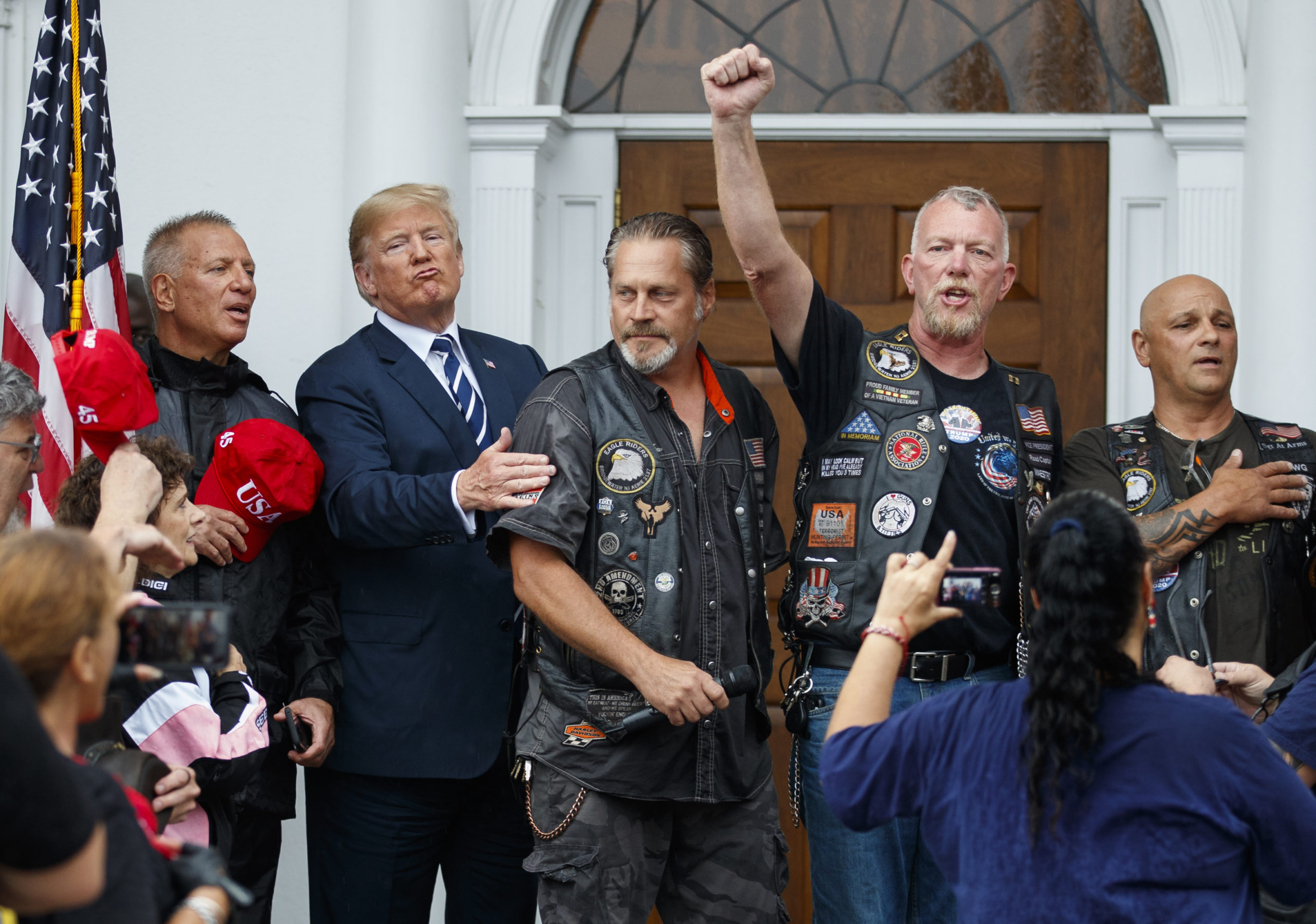 BEDMINSTER, N.J. — As rain dumped on his New Jersey golf club, President Donald Trump raged on Saturday, lashing out at his Justice Department on Twitter before welcoming members of a “Bikers for Trump” fan group to the manicured grounds.
Dozens and dozens of gleaming Harleys, Hondas and other motorcycles descended on the central New Jersey property for what had been billed as an outdoor photo-op with Trump. But pouring rain and flash-flood warnings scrambled the plan, sending soggy bikers inside a crystal-chandeliered clubhouse ballroom, where Trump signed autographs and posed for selfies and his guests booed reporters.
It was a classic, chaotic Trump scene reminiscent of his ramshackle early campaign. The president was continuing an extended working vacation away from Washington.
The day began on Twitter at 8:36 a.m. with a broadside against the FBI, which Trump accused of stonewalling a public-records request for former Deputy Attorney General Andrew McCabe’s text messages.
“What are they hiding?” the president asked, threatening that he “may have to get involved” personally in internal FBI business and warning, “DO NOT DESTROY.”

Trump appeared in a better mood when he greeted the bikers, who chanted “Four more years!” and “USA!” as he entered the ballroom. Rain streamed down the windows and pools formed on the empty golf greens outside.
He quickly pointed out the sopping-wet media, which sparked jeers and calls to “tell the truth.” And he thanked the group, saying they’d been with him since the beginning and calling their motorcycles “the most beautiful bikes anyone’s ever seen.”
He later walked into the crowd of supporters, shaking hands, posing for selfies and signing autographs.
At one point, Trump returned to the podium to poll those in the crowd on their views of the press, prompting more jeers. One joked that the press pool should be thrown out in the rain.

Trump: Omarosa Is ‘a Lowlife’

The president largely ignored reporters’ shouted questions, except for one about former White House adviser and reality star Omarosa Manigault Newman and her new book, which includes scandalous — and often unsupported — accusations against Trump.
The president leaned over and cupped his hand around his mouth as if to whisper.
“Lowlife. She’s a lowlife,” Trump said.
He ignored a question about ongoing trade negotiations with Mexico, which prompted some in the crowd to shout, “Build the wall!”
The White House had said about 180 bikers would be attending the event, including military veterans and members of law enforcement agencies, as well as members of the New Jersey chapter of Bikers for Trump, whose members frequently attended Trump’s campaign rallies, sometimes facing off with anti-Trump protesters.
Later, when the rain had eased, Trump walked outside the residence, where the bikers had gathered with their motorcycles on the drive. He posed for more pictures, stood for the Pledge of Alliance and urged the bikers to rev their engines.
“Let’s hear those engines now,” he called out, gesturing for them to go louder as the motors roared.

Earlier in the day, Trump’s wrath poured down on Attorney General Jeff Sessions and the president’s alleged enemies in the FBI, including ex-FBI Director James Comey, McCabe and Peter Strzok, an FBI agent who was removed from Robert Mueller’s probe of Russian interference in the 2016 election after Mueller learned he’d expressed distaste for Trump in personal text messages.
Trump branded them all “clowns and losers” who had hurt “So many of the great men and women of the FBI.”
Trump also revived his frequent attacks on Sessions, calling him “scared stiff and Missing in Action.” He criticized Deputy Attorney General Bruce Ohr, who served as the initial DOJ contact for Chris Steele, the former British intelligence officer commissioned by an American political research firm to explore Trump’s alleged ties with the Russian government.
Trump marked the one-year anniversary of deadly clashes in Charlottesville, Virginia, with a tweet saying he condemns “all types of racism and acts of violence.”
Last year, Trump said there was “blame on both sides” for the violence that broke out when white nationalists descended on Charlottesville to protest the removal of Confederate statutes and marched through town shouting racist slurs. Trump said then that the group included “fine people.”
In Saturday’s tweet, Trump said the “riots in Charlottesville a year ago resulted in senseless death and division.”
“We must come together as a nation. I condemn all types of racism and acts of violence. Peace to ALL Americans!” he wrote.