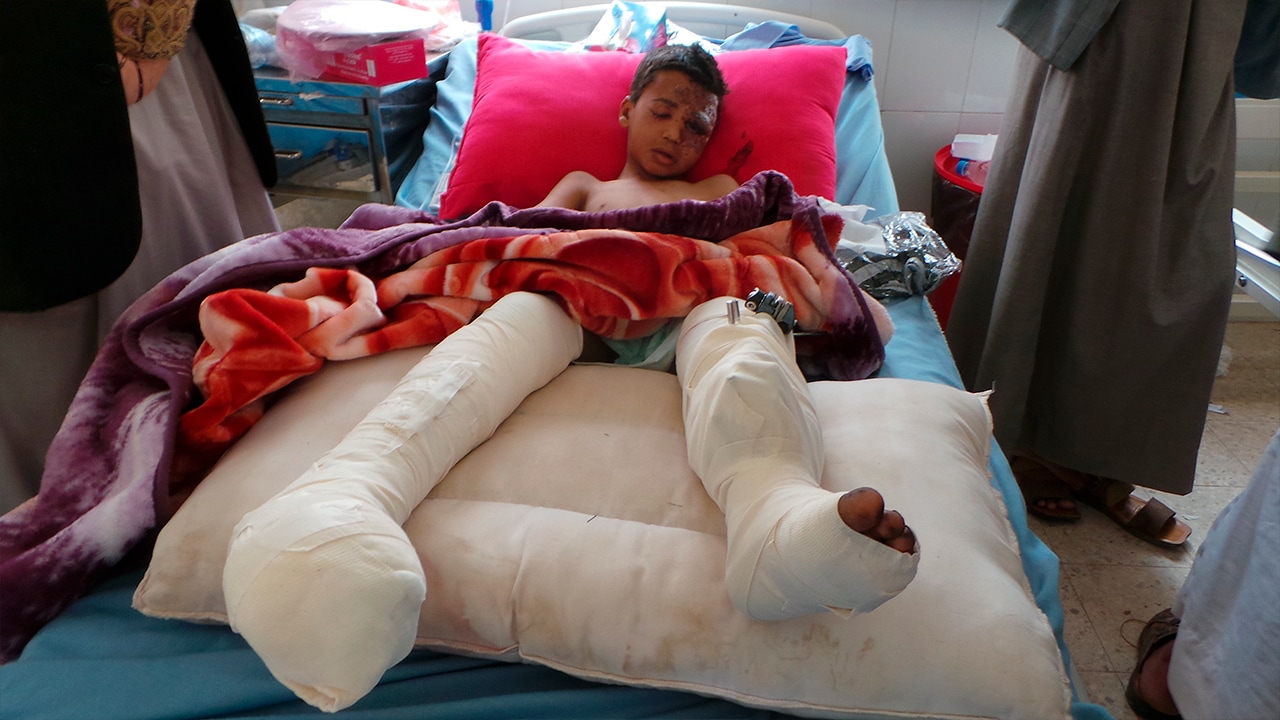 SANAA, Yemen — Yemen’s Shiite rebels on Friday backed a U.N. call for a probe into a Saudi-led coalition airstrike in the country’s north that killed dozens of people the previous day, including many children, in an attack that drew wide international criticism.
Senior Yemeni rebel leader Mohammed Ali al-Houthi said on Twitter that the rebels — known as Houthis — welcome the call and are willing to cooperate in an investigation of the strike in Saada province that hit a bus carrying civilians, many of them school children, in a busy market in Dahyan district.
The coalition said Friday it would investigate. The official Saudi Press Agency quoted an unnamed senior official as saying the coalition has a “firm commitment” to investigate incidents involving “claims of mistakes or violations of international law” and to hold those responsible accountable.
The coalition’s statement signaled a shift in its earlier stance when spokesman Col. Turki al-Malki defended the attack as a “legitimate military action” and blamed the Houthis for recruiting children and using them in the battlefields as cover.
The coalition, which has been at war with the Houthis for more than three years, said the attack on Saada was in response to a missile fired by the rebels into the kingdom’s south a day earlier. The coalition said it had intercepted and destroyed the missile but its fragments killed one person and wounded 11 others in Saudi’s southwestern border region of Jizan.

The Iran-aligned Houthis regularly fire into Saudi Arabia and have previously targeted its capital, Riyadh, with ballistic missiles. They say their missile attacks on the kingdom are in retaliation for air raids on Yemen by the Western-backed coalition. On Friday, the rebel-run Al Masirah TV reported that the Houthis fired ballistic missiles targeting military bases in Saudi Arabia’s southern provinces of Asir and Jizan. The Saudi-owned Al Arabiya satellite news channel reported that the coalition had intercepted two missiles fired toward Jizan.
In a statement after Thursday’s airstrike, U.N. chief António Guterres urged Yemen’s warring parties to take “constant care to spare civilians” during military operations and also called for an “independent and prompt investigation.”
The United Nations said an exact death toll has yet to be confirmed but initial reports point to more than 60 casualties, with dozens severely wounded. Al-Masirah reported at least 51 people, including 40 children, were killed and 79 others, including 56 children, were wounded in the airstrike, citing the Yemeni Health Ministry in the capital, Sanaa, which is under rebel control.
It also said three children have gone missing since the airstrike.
The International Committee of the Red Cross said its team received the bodies of 29 children, all under 15 years old, and treated 48 wounded, 30 of them children.

Following the strike, Al Masirah broadcast horrific images of lifeless bodies of children, covered in blood, and others who appeared severely wounded, lying on hospital stretchers crying and screaming in pain. The authenticity of the footage could not be independently verified.


“We take all credible accounts of civilian casualties very seriously.” — Heather Nauert, spokeswoman
On Friday, Ahmed al-Hamoud, who was traveling from Saada to Sanaa, said a somber mood prevailed over the province and that coalition planes could be seen flying over it from time to time.
The U.S. State Department called on the Saudi-led coalition “to conduct a thorough and transparent investigation into the incident,” spokeswoman Heather Nauert said.
Also, the U.N. special envoy for Yemen, Martin Griffiths, who has been pushing for peace efforts in the war-torn country, said he was “deeply shocked by the appalling tragedy that claimed so many innocent lives.”
Still, he called on the warring parties to “engage constructively” in the first round of consultations scheduled for Sept. 6 in Geneva. The United Nations children’s agency called the attack in Saada “unconscionable” and a “low point in the country’s brutal war.”
Impoverished Yemen has been embroiled in the war pitting the Saudi-led coalition against the Iran-aligned Houthis since March 2015. Civilians have been enmeshed over the years in the conflict which has killed over 10,000, crippled the country’s health system and pushed it to the brink of famine.
Yemen has become the world’s worst humanitarian crisis, with more than 22.2 million people in need of assistance.
Related Topics:attackcoalition airstrikedeathsHouthismilitary actionShiite rebelsYemen
Up Next