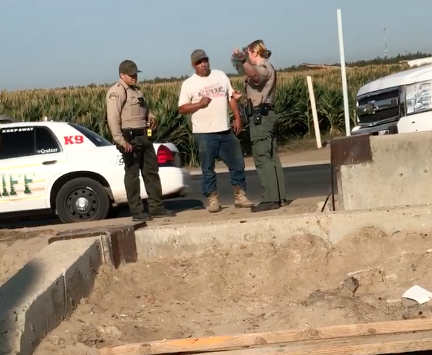 The campaign of Devin Nunes’ congressional opponent is accusing a relative of the congressman of disrupting a recent video shoot in Tulare.
Staff for Democrat Andrew Janz issued a news release and a video allegedly showing a Nunes family member harassing them while they were attempting to shoot a campaign ad Aug. 2 focused on water and agriculture issues.
(Click on the image above to watch the video).
The video shows a man complaining to Tulare County sheriff’s deputies.
The Tulare County Sheriff’s Office has identified the man as Gerald Nunes. Although Rep. Devin Nunes (R-Tulare) has at least one relative by that name, GV Wire has not confirmed that they are related.
Neither the Nunes’ campaign nor Gerald Nunes responded to GV Wire’s requests for comment.

“I know [Devin] Nunes is desperate to hide the water crisis, but nothing’s going to get in my way of talking about the issues,” Janz said in a statement.
Janz’s challenge of Nunes in California’s 22nd District has drawn national attention and campaign donations to both sides from across the United States.
Janz campaign spokesperson Clara Varner said the accusation of Gerald Nunes’s relationship to Devin Nunes is based solely on the fact that Nunes repeatedly said, “I’m Nunes.”
Varner said Gerald Nunes started screaming, yelling and threatening the production crew. She said he also cursed at the crew’s production manager and called her names.

The campaign spokesperson also said there is no clear motive for why Nunes caused the disruption. She said the incident ended up costing the Janz campaign two hours of video production time.
Varner said Nunes eventually called the Tulare County Sheriff’s Office.

Tulare County Sheriff’s Office spokeswoman Ashley Ritchie said that just before 8 a.m. on Aug. 2 the office received a call about trespassing on Road 100, which is one-half mile south of Avenue 264 on the east side of the road in Tulare.
When deputies arrived, Ritchie said, Nunes stated that there were people at his irrigation ditch that did not have permission to be there.
“Nunes said he asked them to leave, but they did not,” Ritchie said.

Campaign Had Permission To Shoot Ad on Land

Varner said the production crew was on a family farm and had a signed agreement with the family to film. The Janz campaign provided GV Wire a copy of the agreement with the farm owner.
Ritchie said that deputies spoke to the members of the production crew, who said they were from Hollywood shooting a commercial for Janz.
Ritchie also said that the crew members eventually agreed to move to the other side of the road, off of Nunes’ property.
Varner said that before the deputies left the scene, they told Nunes to leave and to not call them again.
On his way out, Varner said, Nunes kicked up dirt with his truck to damage the commercial shoot.
Related Topics:Andrew Janzcommercial shootDevin Nunesfamily member
Up Next