The Rush and Risks of Fighting Fires on a Bulldozer 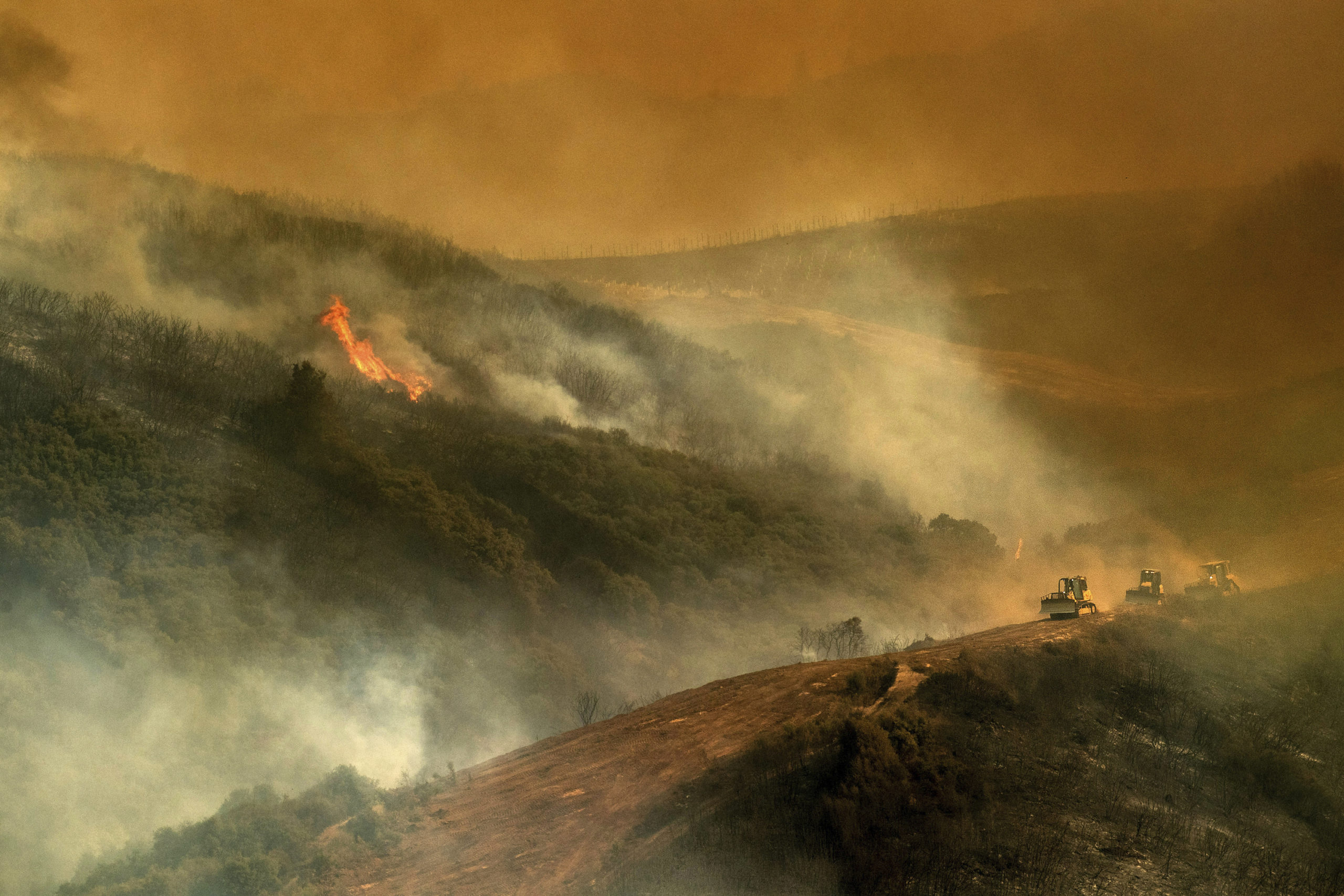 Not all firefighters carry a hose or shovel.
The adrenaline junkies who steer heavy bulldozers across steep ridges face serious hazards, from smoke and flames but also from unsteady dirt and steep terrain that can flip them over. The deaths of two bulldozer operators battling California wildfires in July highlighted the dangers confronting these less visible firefighters.
Braden Varney, 36, was clearing a fire line near Yosemite National Park on July 14 when his vehicle overturned and rolled down a ridge. Don Ray Smith, 81, was overtaken by wildfire near Redding last week. 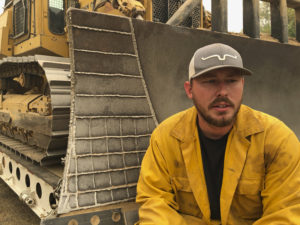 “To me, it’s the closest thing to war without getting shot at. It’s pandemonium … it’s wild out there. You’re getting to see 200- to 300-foot flame lengths. It’s a whole different world. It’s a rush.” — Bulldozer operator Dustin Westfall

Drivers of so-called dozers say they are acutely aware of the dangers and regularly find themselves in sticky situations. They do it for the thrill, the challenge, the good money and the opportunity to make a difference saving people’s lives and homes.
“To me, it’s the closest thing to war without getting shot at,” said Dustin Westfall, a dozer operator working for a private contractor on the fire near Redding that’s killed six people. “It’s pandemonium … it’s wild out there. You’re getting to see 200- to 300-foot flame lengths. It’s a whole different world. It’s a rush.”

Dozers are an integral part of the battle against large blazes but are rarely seen in dramatic images of flaming trees and raining ash.
They use roughly 10-foot blades to push aside shrubs, brush, grass and even trees so the advancing flames meet bare dirt and have nothing to consume. Ideally, the lack of fuel will stop the fire’s progress. At the very least, it generally will slow down the flames.
Dozers usually work in small groups, but sometimes alone, in extremely steep terrain. Soft soils or hard granite can cause them to slide. It’s hard to see because of smoke and the dirt they kick up. Fire moves faster than heavy machines, so shifting winds can send flames toward bulldozers.
Because dozers can get into places no other equipment can reach, the drivers sometimes find themselves far away from backup, relying on radio traffic and aircraft to tell them what the fire is doing.


“Braden would go to a fire, get covered in dirt, come home and play crocodile with his kids on his living room carpet. He was a man’s man, and he was a father first and foremost.” — Bulldozer operator Dean Mullis, talking about the late Braden Varney
Some work close to flames. Others build “contingency lines” farther back to act as a backstop if the first line is breached.
“They’re a special breed of guys,” said Cliff Allen, president of the union representing California Department of Forestry and Fire Protection personnel, including dozer operators. “The job that they do, it takes a special person, because they’re going up and down really steep terrain.”

Dozer operators looking to work directly for Cal Fire, the state’s firefighting agency, must have 500 hours of experience just to be considered. Privately hired operators have various experience levels, but all must complete an annual course in fireline safety.
Authorities have released little information about how Varney and Smith died.
Their deaths come two years after a dozer trying to maneuver around a fire engine overturned near Big Sur and the operator was ejected. Another dozer operator was killed in the same region in 2007 when his rig rolled, causing him to hit his head on the wall of the cab, according to Cal Fire investigative reports.
The deaths have weighed heavily on dozer drivers busy with an active fire season across the Western United States — a reminder of the perils that await them on the fire line. 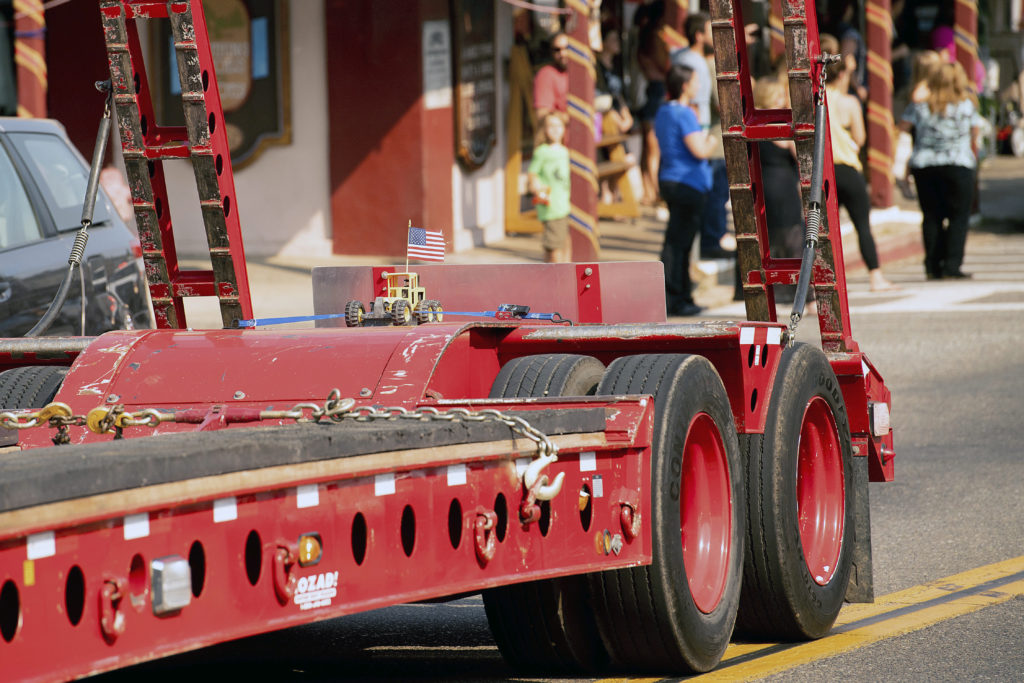 FILE – In this July 16, 2018 file photo, a toy bulldozer rests on a truck as the body of firefighter Braden Varney is transported through Mariposa. Varney died while battling the Ferguson fire when his bulldozer overturned. The dangers of the job were highlighted this year by the deaths of two dozer operators battling California wildfires in July. (AP File Photo/Noah Berger)

Dean Mullis, a childhood friend of Varney’s and a fellow heavy equipment operator for Cal Fire, said Varney was devoted to his family and unfailingly generous.
“Braden would go to a fire, get covered in dirt, come home and play crocodile with his kids on his living room carpet,” Mullis said. “He was a man’s man, and he was a father first and foremost.”

He came from a bulldozing family — his father was a dozer driver for Cal Fire, and the two started a grading and excavating business.
Smith, a bulldozer operator working for a private company on contract for the state, “always had some good laughs and good stories” and liked to sit outside his trailer drinking beer with friends, said Vaughn Hohing, who used to fight fires as a bulldozer operator and said he worked often with Smith.
When he wasn’t fighting fires, Smith lived and worked on a horse ranch in Pollock Pines, east of Sacramento, repairing things, plowing snow and performing other maintenance. Smith had lots of experience working outdoors with heavy equipment.
At 81, Smith was one of the older guys working on fires, but dozer operators said it’s common for people to work into their 60s and 70s. Fighting fire is a specialized skill, and while the pay is good, it’s an expensive business to get into.
“If you’re in a bad mood, go see Don,” Hohing said. “You always felt better when you left.”

What Are Fresno Area Schools Doing To Keep Students Safe?