A common theme emerged when talking with the operators of the 30-plus taco trucks at Chukchansi Park: They are uber passionate about what they do.

Nearly 10,000 fans showed up for the food, taco-eating contest, and yes, an 8-7 victory by the Grizzlies — oops, I mean Tacos — over the Sacramento River Cats.

Whether it was meat from the cow’s tongue, cheek or body (or even no meat at all), the taco trucks loved serving it, and the fans chowed it down.

That’s how day one of the eighth annual Taco Truck Throwdown in Fresno went. The event concludes tonight (July 20). There is no ball game, but trucks will be on the field. And there will be pro wrestling, musical acts, and a professional taco eating contest.

A Champion is Born?

The vascular Zach Armas, a 23-year-old bartender from Clovis, wolfed down 20 tacos in about three minutes to win Thursday’s amateur contest. He received a gift certificate to the Grizzlies team store. And Friday night he will compete with the big boys in another taco-eating contest. 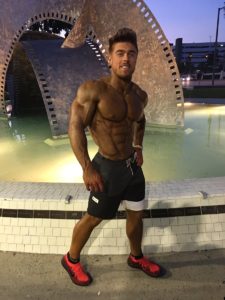 Apparently, the act public act of gluttony did not deter Armas from post-contest photos with young admirers of the opposite sex.

Watch the video above for a flavor of the TTT8.