While many might use the word ‘gluttony’ to describe my quest to pick up a free frozen drink at all 25 Fresno and Clovis 7-Eleven stores, I call it Wednesday.

7-Eleven offers a free small Slurpee to celebrate its birthday every year on July 11. The convenience store chain estimates it will pass out 9 million cups of the frozen treat today.

My goal was to visit all 25 local stores and claim the freebie at each one. Even with a lunch break (as mandated by state law), I finished my challenge in under six hours.

A Crowded Day at the Store

I discovered that every 7-Eleven is within 5-10 minutes driving distance of each other. That’s Starbucks level saturation.

My adventure started in northwest Fresno at the 7-Eleven at Milburn & Herndon. The line started snaking through the store at 10:55 a.m., five minutes before the free Slurpee promotion started. But, a clerk attended to the machines, handing them out in efficient order.

The next stop was the store near Costco on West Shaw. I noticed a woman and her two sharply dressed grandsons. They were at the first store, as well. Maybe they had the same idea as me: collect 25 drinks.

That was confirmed when I saw them again at my third stop at Ashlan Avenue and Highway 99. But, they tapped out after that.

There are 7-Elevens in all parts of Fresno. Some nice, some not, just like the city. Driving through the southeast part of town made me realize it is one of the faster-growing areas and it looks nice, too.

11 Colors of the Slurpee Rainbow

By my count, there were 11 different Slurpee flavors offered, in hues spanning the rainbow. The most exotic was Capn’ Crunch Berry, which did taste like mashed up sugary cereal goodness.

After a while, all the Slurpee’s tasted the same. Color became the only variable. Wild Cherry and some flavor called Deadpool (named after the movie) were red; Mandarin orange was orange; banana and lemon were yellow; Mountain Dew was green; raspberry and the Crunch Berry were blue; tropical was pinkish; pina colada was white, and Coca Cola was brown.

In the interest of full disclosure, I was only able to consume five Slurpees myself. But, the remaining 20 that survived the 104-plus degree heat made me a real popular guy at work.

While 7-Eleven may be a convenience store, its parking lots were anything but. Cars zoomed in and out of the rather cramped spaces. At times, the traffic in the busy lots reminded me of River Park more than a place to get frozen drinks and warmed up food.

One man at the downtown location had the temerity to park his truck across a handicap space and a regular space. His excuse— he ran out of gas. That’s was bad luck for him, and a hardship as well for anyone else who wanted to shoehorn into the tiny parking lot.

Regardless of the obstacles, I survived the 2018 Slurpee Challenge. I think I’m cool until next July 11. 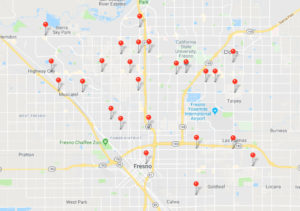 A listing of the 25 Fresno-Clovis 7-Eleven locations.

Update: As of noon today, I have visited seven of the 25 locations. Just 18 more to go. My favorite flavor so far: Coca-Cola.