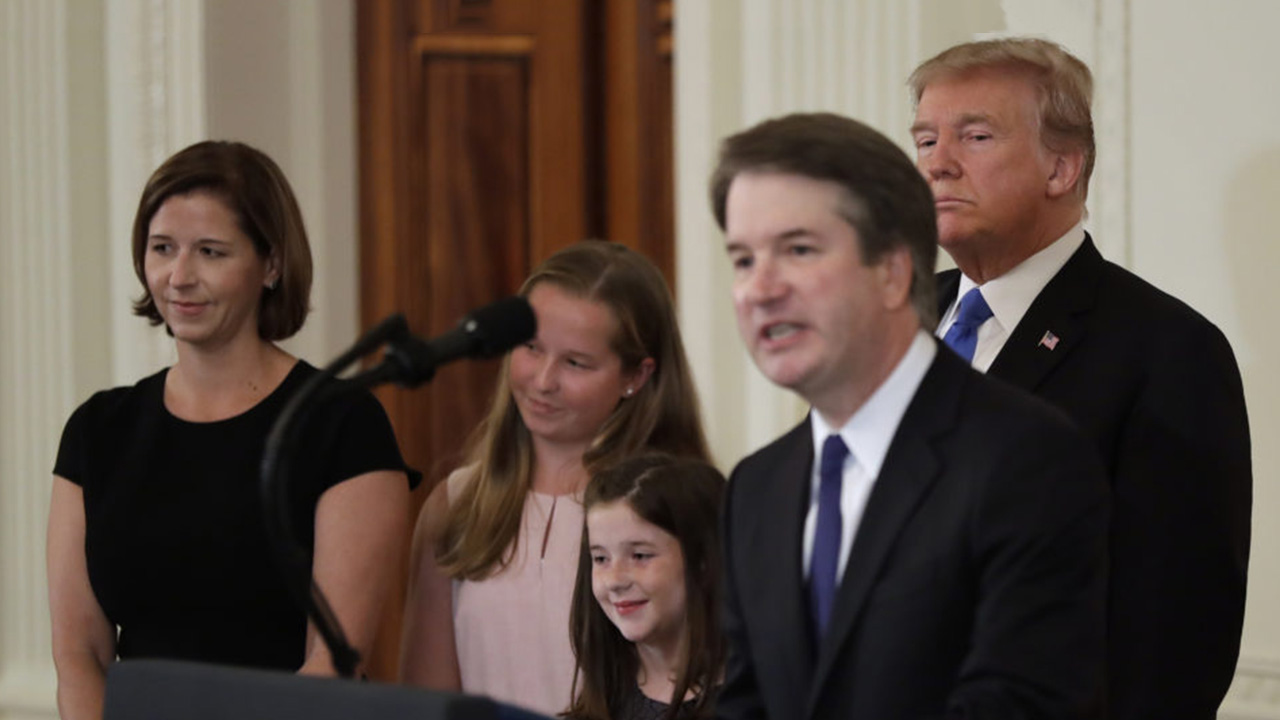 President Donald Trump has nominated influential conservative Judge Brett Kavanaugh to the Supreme Court as he seeks to shift the nation’s highest court further to the right.
Trump chose the 53-year-old federal appellate judge for the seat opened up by the retirement of Justice Anthony Kennedy. Kavanaugh would be less receptive to abortion and gay rights than Kennedy was.
Kavanaugh is Trump’s second high court pick after Justice Neil Gorsuch. Kavanaugh and Gorsuch served as law clerks to Kennedy at the same time early in their legal careers.
Kavanaugh is a longtime fixture of the Republican legal establishment. He has been a judge on the federal appeals court in Washington since 2006. He also was a key aide to Kenneth Starr during his investigation of President Bill Clinton and worked in the White House during George W. Bush’s presidency. 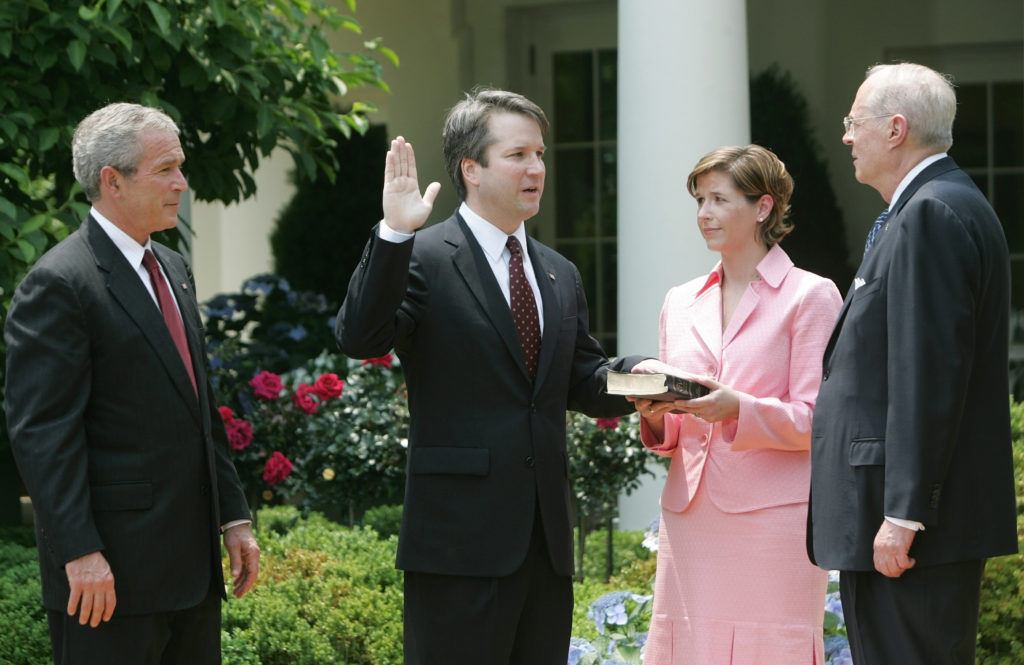 FILE – In this June 1, 2006 file photo, from left to right, President Bush, watches the swearing-in of Brett Kavanaugh as Judge for the U.S. Court of Appeals for the District of Columbia by U.S. Supreme Court Associate Justice Anthony M. Kennedy, far right, during a ceremony in the Rose Garden of the White House, in Washington. Holding the Bible is Kavanaugh’s wife Ashley Kavanaugh. Kavanaugh is one of four judges thought to be President Donald Trump’s top contenders to fill a vacancy on the Supreme Court. (AP Photo/Pablo Martinez Monsivais, File)

The Senate’s top Democrat, meanwhile, said that Trump’s nomination of Kavanaugh to the Supreme Court puts abortion rights and health care protections for women “on the judicial chopping block.”
New York Sen. Chuck Schumer says by picking Kavanaugh, Trump is delivering on his pledge to “punish” women for their choices.
He says he will fight the nomination “with everything I have.” He’s urging people to make their voices heard, an indirect reference to voicing their objections to senators.
Schumer says if Kavanaugh is confirmed, “women’s reproductive rights would be in the hands of five men on the Supreme Court.”
Schumer and other Democrats have cited campaign statements Trump made to assert that any of the candidates Trump mulled would oppose abortion rights and the Obama-era health care law.

Trump: Kavanaugh Is a ‘Judge’s Judge’

Trump introduced Kavanaugh as “a judge’s judge” and cited his “proven commitment to equal justice under the law.”
Trump announced Kavanaugh as his pick Monday night on prime-time television.
Trump says Kavanaugh has “impeccable credentials and unsurpassed qualifications.”
Trump made the announcement in the East Room of the White House and rousing applause broke out as Kavanaugh entered with his wife and two daughters.

Kavanaugh is likely to be more conservative than Justice Kennedy on a range of social issues. At the top of that list is abortion.
A more conservative majority could be more willing to uphold state restrictions on abortion, if not overturn the 45-year-old landmark Roe v. Wade decision that established a woman’s constitutional right.
Kennedy’s replacement also could be more willing to allow states to carry out executions and could support undoing earlier court holdings in the areas of racial discrimination in housing and the workplace. Kennedy provided a decisive vote in 2015 on an important fair housing case.
Like the other eight justices on the court, Kavanaugh has an Ivy League law degree, spending his undergraduate and law school years at Yale.

Since 2006, he has been a judge on the federal appeals court in Washington. He also was a key aide to Kenneth Starr during Starr’s investigation of President Bill Clinton, worked on behalf of George W. Bush’s campaign during the election recount in 2000 and served in the Bush White House.
Kavanaugh’s many written opinions provide insight into his thinking and also will be fodder for Senate Democrats who will seek to block his confirmation. He has written roughly 300 opinions as a judge, authored several law journal articles, regularly taught law school classes and spoken frequently in public.
Kavanaugh’s views on presidential power and abortion are expected to draw particular attention in his confirmation hearing.
Drawing on his experience working on the Clinton investigation and then in the Bush White House, he wrote in a 2009 law review article that he favored exempting presidents from facing both civil suits and criminal investigations, including indictment, while in office.
That view has particular relevance as special counsel Robert Mueller is looking into Russian meddling in the 2016 election and whether the Trump campaign played any role in a foreign interference plot.
On abortion, Kavanaugh voted in October to delay an abortion for a teenage immigrant who was in government custody.

The court’s ruling in her favor was based on a constitutional principle, he wrote, “as novel as it is wrong: a new right for unlawful immigrant minors in U.S. Government detention to obtain immediate abortion on demand.”
Trump’s success in confirming conservative judges, as well as a Supreme Court justice, has cheered Republicans amid concerns about his limited policy achievements and chaotic management style.
Of the court’s liberal justices, Ruth Bader Ginsburg is 85 and Stephen Breyer turns 80 next month, so Trump may well get another opportunity to cement conservative dominance of the court for years to come.

President Trump: “Tonight, it is my honor and privilege to announce that I will nominate Judge Brett Kavanaugh to the United States Supreme Court.”

Brett Kavanaugh will do nothing but side with Trump’s dangerous, bigoted agenda.

He believes assault weapons bans are unconstitutional, would dismantle the ACA, rip away a woman’s right to choose, and threaten LGBT and voting rights.
He would be a disaster for our country.
— Gavin Newsom (@GavinNewsom) July 10, 2018

This is a truly excellent choice by the President. I know Brett Kavanaugh to be a man of character, decency and intellectual depth. He has the mind and temperament of a great Supreme Court justice.