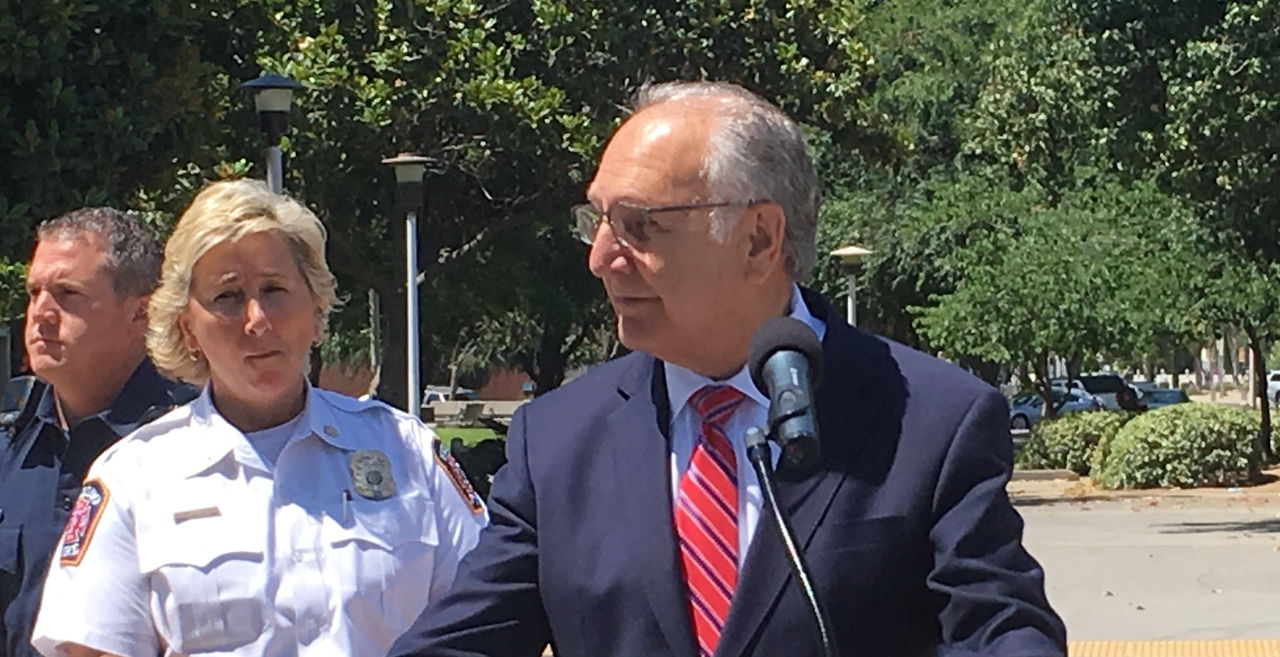 (Note: this story has been updated to reflect Councilmen Garry Bredefeld’s decision about not supporting placing the Brand sales tax plan on the ballot.)
November’s ballot in Fresno could bring a battle of competing sales tax hikes.

Mayor Lee Brand announced his plan Monday for a half-cent sales tax, with the proceeds to be split evenly between public safety and parks.
This is the second sales tax initiative proposed for the fall. The Fresno for Parks group is collecting signatures for a 3/8ths of a cent sales tax dedicated to parks.
The Fresno City Council is scheduled to vote Thursday (June 28) on whether to put Brand’s plan on the ballot. Passage requires two-thirds of the council voting in favor — meaning five of the seven members.

Thus it will take only three votes from the council to block the initiative from the ballot.
Councilmen Steve Brandau and Clint Olivier said that they are not inclined to support any tax measures.
A third conservative-leaning councilmember, Garry Bredefeld, said he will not support Brand’s measure.
“I will not support any tax increases–ever! We are over-taxed and over-regulated from EVERY level of government. This increase would raise our local sales tax to nearly 8.5% for at least 15 years. I campaigned against any efforts to increase taxes and I intend to keep that and all other promises I made to my constituents,” Bredefeld wrote on Facebook.
When asked if he had the five votes, Brand said, “We’ll find out.”

Brand estimates his plan would raise up to $50 million a year. Boosters of the parks-only plan are estimating $38 million annually from their tax.
The city’s current sales tax is  7.975%.
The mayor, at a City Hall news conference, said Fresno’s current $1.115 billion budget isn’t enough.
“I did not make this decision lightly,” Brand said. “I believe my 10-year economic plan for creating at least 10,000 new jobs in Fresno will dramatically improve our economic base and could eventually fund many of these improvements. But, we can’t wait 10 or 15 years.”
The head of the city’s police union echoed the call for more funding.
“There is not enough revenue coming into the city” said Damon Kurtz, president of the Fresno Police Officers’ Association. “If you want a stronger city, if you want stronger parks, where are you going to cut?”
Brand said his plan would hire up to 200 public safety employees. Future city councils and the respective fire and police chiefs would decide how the additional money would be spent.
The language calls for spending in seven areas, including improving 911 response times, safety equipment and new vehicles, as well as hiring new officers without a specific number cited.
Brand said the tax revenue would not go to public safety pensions or parks bonds.

Larry Powell, spokesman and advocate for the Fresno for Parks plan, says his group will wait and see after Thursday’s council vote on how to proceed. His group has had some talks with the mayor, but it plans on continuing to gather approximately 23,000 signatures to place its proposal on the ballot.
Either way, Powell said that he is glad Brand is paying attention to parks.
Brand’s park plan would follow the Parks Master Plan guidelines, without specifically mentioning which areas of the city that funds would be spent.
Whether his plan competes with the Fresno for Parks plan, Brand said, “I’ll support the one I’ve proposed.”
In theory, both sales tax plans can reach the ballot. Each would require two-thirds’ approval by voters.

Plans At a Glance

As signaled previously in Politics 101, the recall petition to oust Richard Solis as trustee of Central Unified failed. Advocates failed to return the estimated 1,500 signatures they needed by the June 19 deadline.
This likely means that the effort to recall Trustee Phillip Cervantes — with signatures due July 19 — will also fail.
The recall effort centered on the board’s Feb. 27 removal of superintendent Mark Sutton.

At one point during the year, Councilman Garry Bredefeld butted heads with Brand over how to make Fresno more business-friendly. Now they appear to be on the same page.
Bredefeld received preliminary approval from the council for his plan to speed development last week. Among those endorsing the idea: the mayor.
Bredefeld thanked Brand for his support and suggestions for improvements for the system known as “at risk” development. The term means developers can start projects, but if city inspectors call for changes afterward, the developer must comply and foot the bill for changes.
Brand returned the favor.
“I want to thank Councilman Bredefeld for coming into my office, meeting with my staff to work at the details of the at risk development. It’s definitely a move in the right direction to make it easier for developments to move along,” Brand said. “It is consistent with my Business Friendly Fresno priority. I fully support your measure.”
After passage, an elated Bredefeld took to Twitter:

Will tremendously help all businesses, employers, and get people hired more quickly! https://t.co/d7AVzqVbBd