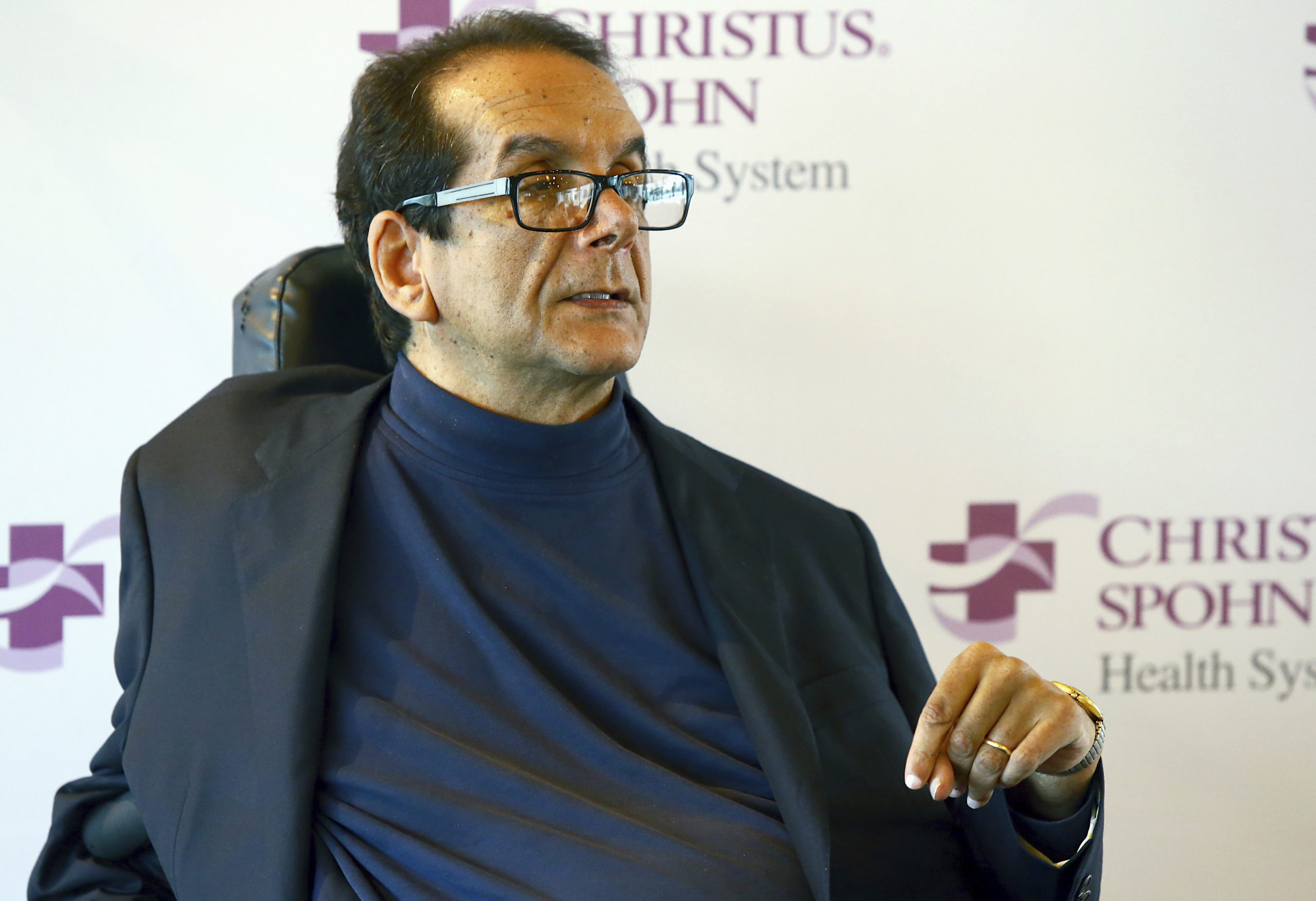 NEW YORK (AP) — Charles Krauthammer, the Pulitzer Prize-winning columnist and pundit who helped shape and occasionally dissented from the conservative movement as he evolved from “Great Society” Democrat to Iraq War cheerleader to denouncer of Donald Trump, died Thursday.
He was 68.

Sometimes scornful, sometimes reflective, he was awarded a Pulitzer in 1987 for “his witty and insightful” commentary and was an influential voice among Republicans, whether through his syndicated column or his appearances on Fox News Channel. He was most associated with Brit Hume’s nightly newscast and stayed with it when Bret Baier took over in 2009.
Krauthammer is credited with coining the term “The Reagan Doctrine” for President Reagan’s policy of aiding anti-Communist movements worldwide. He was a leading advocate for the Iraq War and a prominent critic of President Barack Obama, whom he praised for his “first-class intellect and first-class temperament” and denounced for having a “highly suspect” character.

Krauthammer was a former Harvard medical student who graduated even after he was paralyzed from the neck down because of a diving board accident, continuing his studies from his hospital bed. He was a Democrat in his youth and his political engagement dated back to 1976, when he handed out leaflets for Henry Jackson’s unsuccessful presidential campaign.
But through the 1980s and beyond, Krauthammer followed a journey akin to such neo-conservative predecessors as Irving Kristol and Norman Podhoretz, turning against his old party on foreign and domestic issues. He aligned with Republicans on everything from confrontation with the Soviet Union to rejection of the “Great Society” programs enacted during the 1960s.
“As I became convinced of the practical and theoretical defects of the social-democratic tendencies of my youth, it was but a short distance to a philosophy of restrained, free-market governance that gave more space and place to the individual and to the civil society that stands between citizen and state,” he wrote in the introduction to “Things That Matter,” a million-selling compilation of his writings published in 2013.
For the Post, Time magazine, The New Republic and other publications, Krauthammer wrote on a wide range of subjects, and in “Things That Matter” listed chess, baseball, “the innocence of dogs” and “the cunning of cats” among his passions. As a psychiatrist in the 1970s, he did groundbreaking research on bipolar disorder.

Politics Is Most Powerful Influence

But he found nothing could live apart from government and the civic realm. “Science, medicine, art, poetry, architecture” and other fields were “fundamentally subordinate. In the end, they must bow to the sovereignty of politics.”
Ever blunt in his criticisms, Krauthammer was an “intense disliker” the liberal columnist E.J. Dionne told Politico in 2009. And opponents had words for him. Christopher Hitchens once called him the “newest of the neocon mini-windbags,” with the “arduous job, in an arduous time, of being an unpredictable conformist.”

Words are inadequate for expressing feelings about the loss of Charles Krauthammer. I learned more from him than just about anyone in my life. I’m grateful for his friendship, his mentoring, his wisdom. What a life he lived. May he have all the rest and peace he so deserved.

He was attacked for his politics, and for his predictions. He was so confident of quick success in Iraq he initially labeled the 2003 invasion “The Three Week War” and defended the conflict for years. He also backed the George W. Bush administration’s use of torture as an “uncontrolled experiment” carried out “sometimes clumsily, sometimes cruelly, indeed, sometimes wrongly. But successfully. It kept us safe.” He was sure that Obama would lose in 2008 because of lingering fears from the Sept. 11, 2001 attacks, and foresaw Mitt Romney defeating him in 2012.

Must Speak ‘Honestly and Bluntly’

But he prided himself on his rejection of orthodoxy and took on Republicans, too, observing during a Fox special in 2013 that “If you’re going to leave the medical profession because you think you have something to say, you betray your whole life if you don’t say what you think and if you don’t say it honestly and bluntly.”
He criticized the death penalty and rejected intelligent design as “today’s tarted-up version of creationism.” In 2005, he was widely cited as a key factor in convincing Bush to rescind the Supreme Court nomination of the president’s friend and legal adviser Harriet Miers, whom Krauthammer and others said lacked the necessary credentials. And he differed with such Fox commentators as Bill O’Reilly and Laura Ingraham as he found himself among the increasingly isolated “Never Trumpers,” Republicans regarding the real estate baron and former “Apprentice” star as a vulgarian unfit for the presidency.
“I used to think Trump was an 11-year-old, an undeveloped schoolyard bully,” he wrote in August 2016, around the time Trump officially became the Republican nominee. “I was off by about 10 years. His needs are more primitive, an infantile hunger for approval and praise, a craving that can never be satisfied. He lives in a cocoon of solipsism where the world outside himself has value — indeed exists — only insofar as it sustains and inflates him.”

Trump, of course, tweeted about Krauthammer, who “pretends to be a smart guy, but if you look at his record, he isn’t. A dummy who is on too many Fox shows. An overrated clown!”
Krauthammer married Robyn Trethewey, an artist and former attorney, in 1974. They had a son, Daniel, who also became a columnist and commentator.
The son of Jewish immigrants from Europe, Krauthammer was born in New York City and moved with his family to Montreal when he was 5, growing up in a French speaking home. His path to political writing was unexpected. First, at McGill University, he became editor in chief of the student newspaper after his predecessor was ousted over what Krauthammer called his “mindless, humorless Maoism.”
In the late 1970s, while a psychiatric resident at Massachusetts General Hospital, a professor with whom he had researched manic depression was appointed to a mental health agency created by President Jimmy Carter. Krauthammer went, too, began writing for The New Republic and was soon recruited to write speeches for Carter’s vice president and 1980 running mate, Walter Mondale.
Carter was defeated by Reagan and on Jan. 20, 1981, Reagan’s inauguration day, Krauthammer formally joined The New Republic as a writer and editor.
“These quite fantastic twists and turns have given me a profound respect for serendipity,” he wrote in 2013. “A long forgotten, utterly trivial student council fight brought me to journalism. A moment of adolescent anger led me to the impulsive decision to quit political studies and enroll in medical school. A decade later, a random presidential appointment having nothing to do with me brought me to a place where my writing and public career could begin.
“When a young journalist asks me today, ‘How do I get to a nationally syndicated columnist?’ I have my answer: ‘First, go to medical school.'”