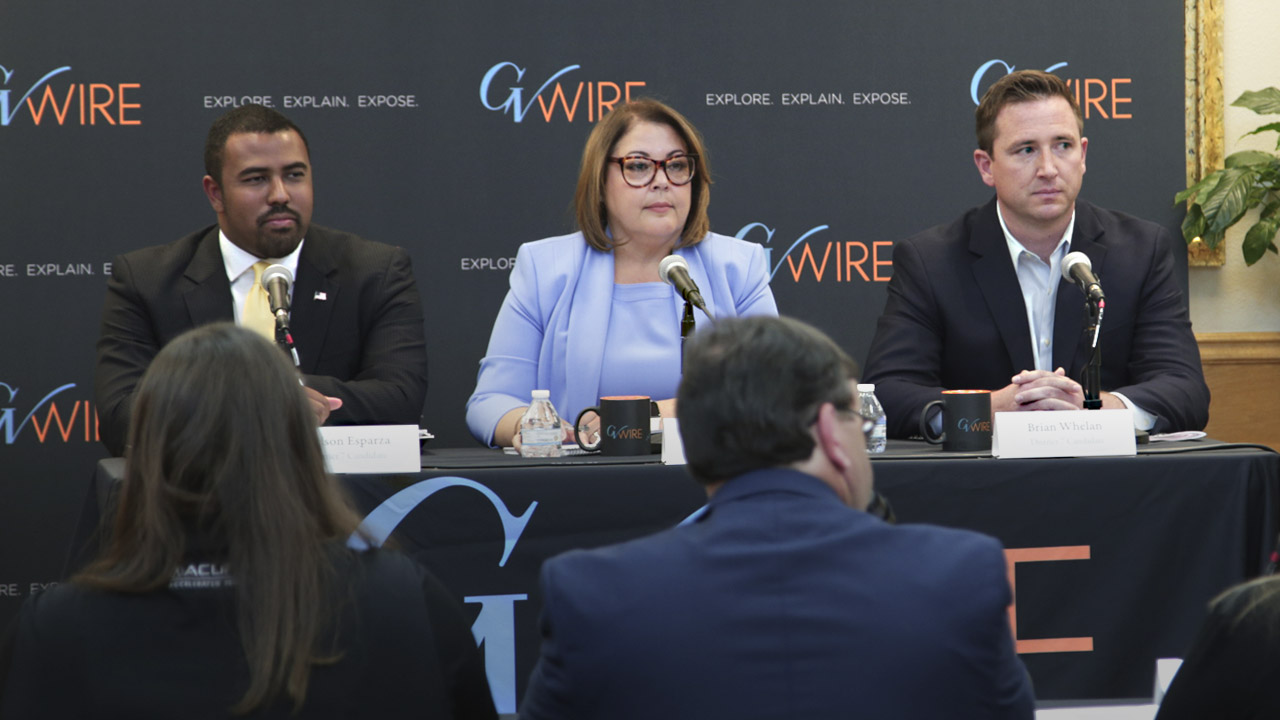 Comparatively, they are left, right and center.
The three candidates for Fresno City Council District 7 faced off in a forum Tuesday (May 1) night at the Islamic Cultural Center of Fresno.
Veva Islas offered the most politically liberal approach to addressing the city’s issues. Brian Whelan took more conservative positions. The views of Nelson Esparza came across as centrist in comparison. Though the race is officially non-partisan, Islas and Esparza are registered Democrats and Whelan is a Republican.
The candidates were questioned on topics ranging from options for addressing blight, city policies relating to refugees and immigrants, their views on proposed tax increases for parks and public safety and whether the public should help fund a future soccer stadium.
GV Wire collaborated with community media provider CMAC and Fresno’s Leading Young Professionals to produce the forum, which was televised and streamed live.

The forum began with each candidate answering a question specifically directed to them.
Esparza was asked about his decision to run for city council with 2 years remaining in his term as a Fresno County Board of Education trustee.
“I am going back to those very same folks. I’m not leaving them, I’m not going anywhere,” Esparza said. “These are the same people who elected me the first time. I am counting on them to elect me a second time to represent them in a different capacity.”
He said he would serve his full term as a councilman if elected and he would “pitch in my fair share” to pay for any special election, if needed, to fill his school board seat. But he noted that an election might not be necessary because the Board of Education has the power to fill a vacancy through appointment.
Islas was questioned about out of area donors who are supporting her campaign. Financial records show 57% of her contributions have come from individuals and organizations outside of Fresno.
“I have friends everywhere.,” Islas said. “I am lucky that because of the work I’ve been doing the last decade, I’ve been able to make connections with people who believe in me and my values.”
Whelan responded to a question about policies toward immigrants. He was asked if he would support the adoption of a sanctuary city ordinance in the city of Fresno.
“I support what is in place right now with respect to how the police are policing and not asking questions about immigration status,” he said. “I don’t want to disturb that balance that exists right now within the city and ask the police to start enforcing immigration. That’s not their role.”

No issue raised during the forum showed a philosophical divide among the candidates more than the regulation of recreational marijuana in the city.
“I see the color green, pun intended,” Esparza said. “My first thought is how many police officers can we hire with that revenue?” Esparza also envisioned spending tax money generated from marijuana for parks and street maintenance.
He also wanted to make sure pot retailers are well-regulated. “If marijuana dispensaries are going to operate as freely as liquor stores in District 7, then I’m not going to support that,” Esparza said.
Islas agreed, saying she wanted dispensaries regulated fairly and not as prevalent as liquor stores or payday lenders.
“Everyone should have an equal opportunity for the business development that these dispensaries will bring,” Islas said. “I think in particular, as a point in equity, those black and brown communities that have suffered the brunt of unfair legal processes should be able to develop and engage in this as a business opportunity.”
Whelan, alone, did not support the sale of recreational marijuana in Fresno.
“My concern is that federally, it’s against the law,” Whelan said. “Investing in these enterprises presents a problem when it comes to whether or not that investment results in divestment or whether the Attorney General of the United States is going to start targeting people who are getting too big. There has to be a federal solution.”

If no candidate earns more than 50% of the vote in the June 5 primary, the top two finishers will face each other in the November general election. For additional information about candidates and races across the Central Valley and around California, visit GV Wire’s Election 2018 portal.
To view the entire District 7 debate, click here.

GOP Voters, Who Do You Like: Cox or Allen?