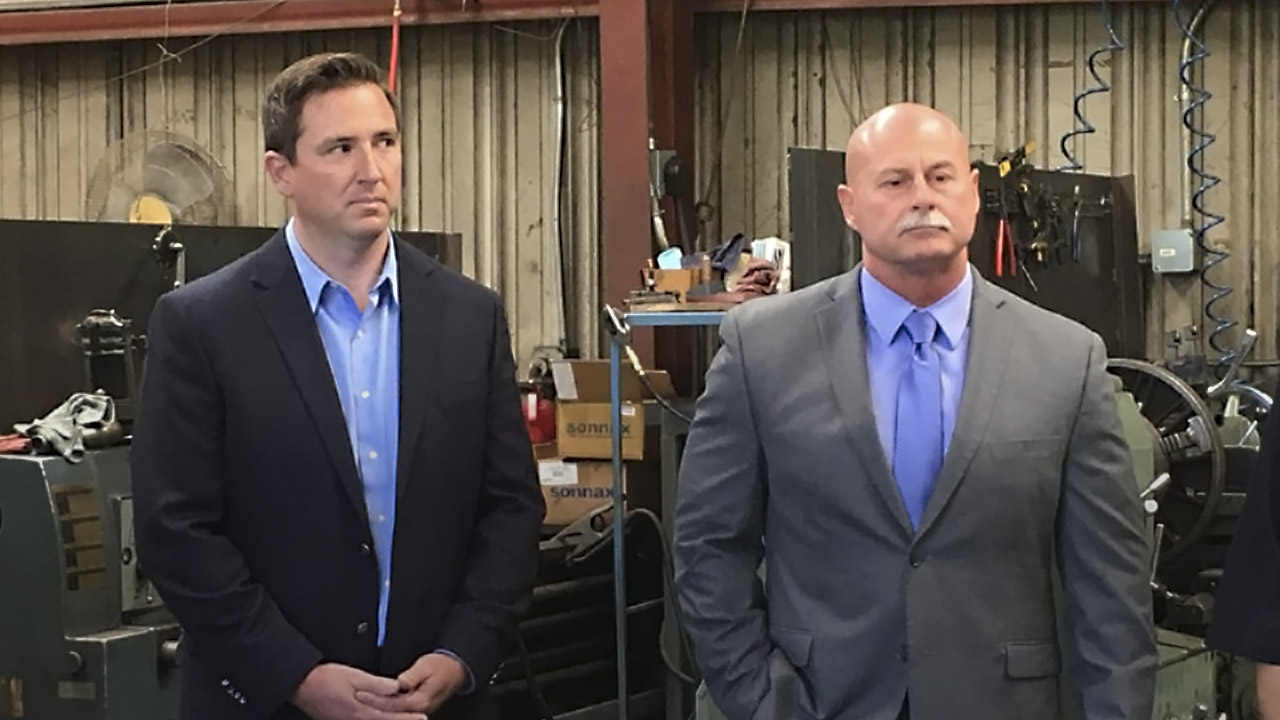 Fresno Police Chief Jerry Dyer admitted the rarity of his support in a city council race. But for Brian Whelan in District 7, Dyer was happy to lend his name.

Clad in a gray suit because laws disallow police personnel from campaigning in uniform, Dyer endorsed Whelan in a news conference at International Torque Converters in central Fresno.

“It is very unique for me to get involved in a city council race,” Dyer said. “(Whelan) cares about the neighborhoods. His number-one priority is making sure we have safe streets. He also wants to rebuild these neighborhoods. Those are the same goals I have.”

Whelan recognized the gravity of having the police chief on his side.

“It’s great and it is also a sign that my vision for Fresno and my vision for helping to improve our community is shared by the chief,” Whelan said.

The Fresno Police Officers’ Association union also stood behind Whelan at the event. President Damon Kurtz lined up next to three police officers wearing uniforms, but with alterations to make sure they weren’t police department issue.

For example, the patch on the sleeve was similar to the white six-pointed star that Fresno PD wears. But the patch bore the name  “FPOA.” The badge and nameplate on the uniform also had the name of the union on it, as opposed to “Fresno PD.”

“I would support a public safety tax as long as there is a sunset provision,” Whelan said. “There is talk of a quarter-cent raise, and that’s kind of where I’m at. From what I’ve heard, it doesn’t look like it will actually get on the ballot.”

“I’m not a sales tax guy, I’m not an increase taxes person. I’m generally adamantly opposed to those things. However, if money is dedicated for the right reason, and public safety has to be that right reason, I’m going to be fully supportive of it.”—Fresno Police Chief Jerry Dyer

According to Kurtz, FPOA is targeting a November date for a public safety sales tax initiative vote, contradicting Whelan’s statement.

Dyer said he’s also 100% on board with a public safety tax.

“I’m not a sales tax guy, I’m not an increase taxes person. I’m generally adamantly opposed to those things,” Dyer said. “However, if money is dedicated for the right reason, and public safety has to be that right reason, I’m going to be fully supportive of it.”

Not all the media were welcomed at the event.

Sandra Celedon, executive director of the advocacy group Fresno Building Healthy Communities, attended. Celedon said on Twitter she was there as a volunteer with the publication Community Alliance.

Before the event started, Whelan’s campaign manager, Alex Tavlian, asked Celedon to leave. She did so without protest.

I attended Brian Whelan’s press conference as a volunteer writer for @FresnoAlliance. His staff asked us to leave. I guess he is not interested in reaching out to local progressives. pic.twitter.com/nnVarK9win

When GV Wire asked Whelan about the incident, he appeared to contradict his staff’s decision.

“It’s too bad that they left. All are welcome to ask questions irrespective of whatever political viewpoints they may have,” Whelan said.

Opponents Not Concerned About Dyer Endorsement

The other candidates in the race, Nelson Esparza and Veva Islas, said that they aren’t concerned about Dyer’s endorsement.

“We all know that the mayor (Lee Brand) is twisting arms at City Hall and holding feet to the fire to get support for his candidate, and the chief works for the mayor,” Esparza said.

“I don’t think today’s news comes as a surprise to anyone. No endorsement or any amount of money changes the fact that there are thousands of families in the district supporting my campaign and who are ready to send me to City Hall on their behalf.”

“The endorsement is an example of politics as usual. I am committed to putting people first,” she said. “District 7 deserves a representative that will look out for their needs. I look forward to being their voice at City Hall.”

The primary is June 5. If a candidate receives more than 50% of the vote, that candidate will be the winner. If not, the top two move onto the November general election.

EPA Needs Fixing. But Scott Pruitt’s Way Is All Wrong.