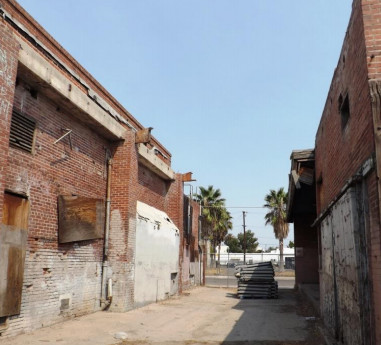 Just when the Fresno City Council was on the cusp of siding with a neighborhood over a business, it pulled back.

Producers Dairy for nearly 18 months has sought council approval to demolish a building at their facility on Belmont Avenue to create for space for more trailer trucks. After months of delays, all parties hoped for a resolution Thursday (March 22).
Neighbors in the South Tower district objected. Not only did they not want more trucks in their residential neighborhood, they cited an agreement that Producers’ owners, the Shehadey family, signed in 1993 to preserve the historic building.
And, based on their comments, some councilmembers appeared to agree. Oliver Baines, Esmeralda Soria and Garry Bredefeld all gave fiery speeches siding with the neighbors.
“If a contract were made, that we, the city council would uphold that contract on your behalf,” Baines said.
Baines and Soria brought up how the council voted on the San Joaquin Riverpark entrance, steering it away from a residential neighborhood to a more commercial area.
“I’m feeling like south Fresno is being treated differently and I’m not OK  with that. South Fresno needs be treated the same as north Fresno. I’m tired of the Tale of Two Cities,” Soria said.
The traffic issue sparked agreement from Bredefeld, who represents northeast Fresno.
“I think this is outrageous. This is easy for me. I am never going to support trucks going around people’s homes 24 hours a day,” Bredefeld said.

Is Producers Building Worth Saving?

Clint Olivier questioned if saving that building was worth it. Producers officials said that the building has been abandoned for decades and is structurally unsound.
Paul Caprioglio and Steve Brandau pushed the idea for allowing more time for the city, Producers and the neighbors to arrive at a settlement. City Manager Wilma Quan-Schecter liked the idea, suggesting 90 days.
Baines relented on voting, saying as long as the tenants of the covenant were preserved, he would allow more time for a solution.
On Twitter, Sandra Celedon of Building Healthy Communities bristled at the council’s reasoning in a Twitter post.

I cannot believe @CityofFresno council is now saying trucks driving through Tower r unnacceptable, but 6200 daily trucks in South Fresno are ok. Either all neighborhoods deserve to be free from heavy truck pollution or they actually mean only their neighborhood matters.

It wasn’t just neighborhood traffic that fired up Council President Esmeralda Soria. She didn’t like how the bank contract extension with Bank of America went.
At the March 8 council meeting, the council rejected what seemed to a routine five-year extension. Councilmen Oliver Baines and Garry Bredefeld blocked the deal, based on past racial discrimination lawsuits involving the banking industry giant.
City staff said starting over wouldn’t work: The contract expires at the end of March, and it takes at least six months to go through the bidding process.
So, the council agreed to stick with BofA for the interim, hoping for a nine-month deal.
Except, Bank of America didn’t want to. It only offered 90 days. That didn’t sit well with Soria.
“You guys are holding us hostage,” she said. “We’ve given you enough business to have the courtesy for a longer timeline.”
The fact that city staff presented the bank renewal with less than montha to go also frustrated Soria.
The council approved the 90-day extension. The solution for the time being is to go back to the five bidders on the contract (Bank of America included), and include an additional question about past discrimination suits, and how they were handled.

With Assemblyman Jim Patterson, Fresno County District Attorney Lisa Smittcamp, Sheriff Margaret Mims and others in attendance, the council unanimously supported a potential November initiative that would reverse the early release of prisoners caused by Propositions  47 and 57 and AB 109.
Proponents say the Keep California Safe initiative would halt the release of 20,000 sexual predators, as well as expanding the definition of a violent crime.
With the endorsement secured, Mims solicited petition signatures in the council chambers.

Governor Jerry Brown re-appointed two Fresnans to the Dental Hygiene Committee.
Susan Good is a former political staffer and former Fresno council candidate.  Brown first appointed her in 2013.
Evangeline Ward has served since 2012. In addition to her current work as a dental hygienist, she teaches at Diablo Valley College.
The option pays $100 a meeting, and does not require senate confirmation.
The group’s responsibilities include issuing, reviewing and enforcing dental hygiene licenses, as well as developing examinations 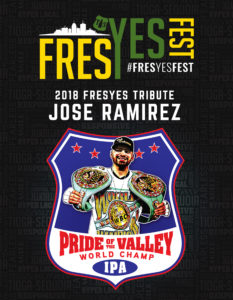 FresYes Fest takes place in downtown Fresno on Saturday. It includes music, food, and of course, beer.
Tioga-Sequoia brewery announced it is honoring world boxing champion Jose Ramirez, by naming its “Pride of the Valley: World Champ IPA” after him.
Ramirez will sign autographs at 5 p.m., Saturday, at the Tioga-Sequoia beer garden (745 Fulton Street).
Beer sales proceeds will go to the Saint Joseph’s Catholic Church in Ramirez’s hometown of Avenal.