Why doesn’t the government do what the people want?

After the recent deadly shooting at a Florida high school, many Americans are asking that question about the federal government’s firearms policy. Recent polls show that a majority of Americans support stronger gun laws – including tighter restrictions on purchasing and a ban on assault weapons – in the wake of the shooting.

Students demand that elected officials “do something,” and many adults echo that sentiment.

But policy does not always follow public opinion. Why are the public’s pleas on this and other issues ignored?

I am a pollster and a political scientist who studies gun control. I have examined the issue from different perspectives.

I have found that there are three major reasons that policy does not always follow public opinion: the structure of the U.S. government, the overlooked complexities of public opinion and the influence of voters and interest groups.

First, the United States is a republic, not a direct democracy. Citizens choose representatives who make policy decisions; citizens do not make those decisions directly. The Founders, who were not all fans of democracy and feared mob rule, established our governmental structure over 200 years ago, and those foundations remain today.

While about half the states have some form of initiative or referendum process to allow voters to directly enact policy, there is no such provision in the U.S. Constitution. And for those who advocate for repealing the Second Amendment as a way to restrict gun ownership in the U.S., that’s not accomplished directly by citizens, either. Such changes would have to be voted on by elected representatives in Congress and legislatures across the country.

The composition and rules of Congress are also crucial, especially in the Senate, where each state has two votes. This allocation of senators disproportionately represents the interests of less populous states. 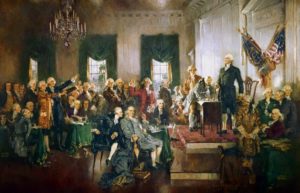 The founding fathers gave us a republic, not a direct democracy. / Architect of the Capitol

So California and New York, the first and fourth largest states and ones that favor stricter gun laws, comprise about 18 percent of the population of the United States but only 4 percent of the senators. Alaska, Wyoming, Montana, North Dakota, South Dakota and Idaho, which tend to favor gun rights, comprise about 2 percent of the population and 12 percent of the Senate. The House of Representatives, where each state is guaranteed at least one representative, also advantages lower-population states, albeit to a much lesser extent. The House is also subject to the partisan drawing of districts which has advantaged Republicans – who tend to support gun rights – since the 2010 Census.The ubiquitous use of the filibuster, which can allow a Senate minority to block majority-supported legislation, has led to the point that most substantive legislation must get 60 votes in the Senate to pass. In a closely divided Senate, 60 votes are almost impossible to muster. In addition, national sentiment is not mirrored in every state or congressional district.

Second: Polling and public opinion are not as straightforward as they seem.
Focusing on only one or two poll questions can distort the public’s views regarding gun control.

Simultaneously, most Americans think that additional gun control measures won’t reduce violent crime. This is not surprising because most Americans don’t blame guns for these tragedies.

We should also keep in mind that gun control is not the only issue in which policy does not follow opinion. Other such issues include policies as diverse as education, foreign aid and abortion.

And policy that reflects the “will of the people” may collide with legitimate legal constraints. Crafting legislation that disqualifies those we all agree should not possess firearms but protects the rights of law-abiding citizens is quite difficult.

For example, the American Civil Liberties Union opposed an order that would have prevented Social Security recipients with mental disabilities who have others managing their benefits from purchasing firearms. “Assault weapons” are difficult to define – and thus legally ban – because semi-automatic rifles can be used for hunting, too, as can AR-style rifles, although they are not commonly used for that purpose.

For example, who votes matters. Gun owners are more likely than non-owners to vote based on the issue of gun control, to have contacted an elected official about gun rights, and to have contributed money to an organization that takes a position on gun control. Such differing rates of political activity are to be expected because many gun owners fear their rights are or will be restricted, and that drives them to the polls. But the frequent appearances of gun control advocates in the news can lead to the erroneous impression that they are more passionate than gun rights supporters. 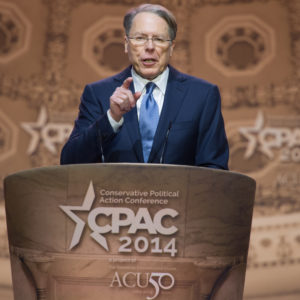 Wayne LaPierre, the CEO of the National Rifle Association, at the annual conservative political conference in March 2014. / Shutterstock

The National Rifle Association is a critical player in this discussion. In some ways a victim of its own success, the gun owners’ rights group is thought by many to have outsized power that it wields indiscriminately.

Its critics have called it a terrorist organization with blood on its hands and legislators who support gun rights have been referred to as “NRA-complicit bloody hannded (sic) mass murder enablers.”

It is reasonable to assume NRA members can deduce that others see their dues and contributions as making them complicit in the deaths of many. I contend that neither these attacks nor boycotts are likely to deter support. At the major national annual conference for conservatives in February 2018, known as CPAC, NRA Executive Vice President Wayne LaPierre responded to that criticism by talking about a “socialist agenda.” He said NRA critics and “the elite” wanted to “eradicate all individual freedoms.”

The rhetoric is toxic, and both sides are guilty.

Whatever power the NRA possesses is a result of its membership and their votes. Its approximately 5 million members pay attention to the group’s candidate ratings and generally vote accordingly. Many others who are not members also agree with the group as evidenced by its consistent “favorable” ratings, typically measured in the 50 percent-plus range. Support for stricter gun laws typically increases after a mass shooting, but it tends to revert back to the trend line over time.

Elected officials want votes. There is no doubt that money is essential for political campaigns, but votes, not money or polls, are what determine elections. If a group can supply votes, then it has power. As such, the NRA is very powerful in some parts of the country and quite weak in others.

Many factors influence how legislation is drafted, amended, enacted and implemented. Searching for a direct causal connection from public opinion to specific policies, including gun control, may be akin to a search for the holy grail.

Our elected officials care more about the opinions of those who vote for them than what the nation as a whole thinks. On most issues they represent the interests of the majority of voters in their districts – or they get voted out of office.