Mimicking Trump, Local Officials Around U.S. Use ‘Fake News’ as a Weapon 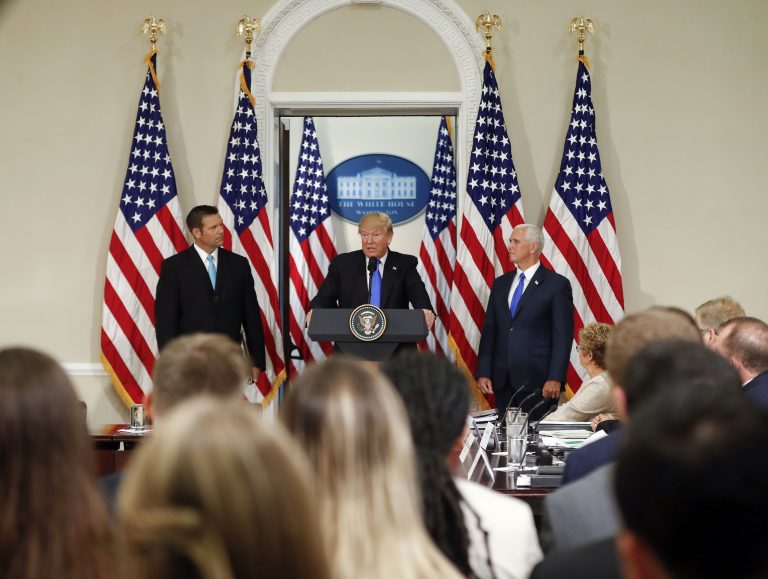 By RYAN J. FOLEY
Associated Press
An Idaho state lawmaker urges her constituents to submit entries for her “fake news awards.” The Kentucky governor tweets #FAKENEWS to dismiss questions about his purchase of a home from a supporter. An aide to the Texas land commissioner uses the phrase to downplay the significance of his boss receiving donations from employees of a company that landed a multimillion-dollar contract.
President Donald Trump’s campaign to discredit the news media has spread to officials at all levels of government, who are echoing his use of the term “fake news” as a weapon against unflattering stories.
It’s become ubiquitous as a signal to a politician’s supporters to ignore legitimate reporting and hard questions, as a smear of the beleaguered and dwindling local press corps, and as a way for conservatives to push back against what they call biased stories.

“When Trump announced he was going to do his fake news awards, a group of us conservative legislators said, ‘We need to do that, too,’” said Idaho state Rep. Priscilla Giddings, who has urged supporters to send examples of “biased, misleading and fake news” and plans to announce her awards March 18. “We need people to wake up to the fact that just because it’s on the front page of the Boise newspaper doesn’t mean it’s 100 percent true.”
The winners of the contest, it turns out, will be announced at the end of Sunshine Week, an annual focus by the nation’s news media on government transparency and the importance of a free press.
Rhonda Prast, editor of the Idaho Statesman in Boise, said it was ridiculous for anyone to assert that it would publish a story it knew contained falsehoods.
“The Statesman has a longstanding reputation as a reliable paper of record — going back 154 years — and our standards for accuracy and fairness have never changed,” she said in a statement. “The allegations of ‘fake news’ are unjust attacks on a free press.”


In the last year, at least three political figures have been implicated in physical assaults on reporters asking questions, while journalists have been attacked in dozens of other incidents by protesters, according to the U.S. Press Freedom Tracker.
Giddings used the term herself last year to dismiss a report from another newspaper suggesting she may have been unqualified to run for office because she was claiming a homeowner’s exemption outside of her district. She said she is submitting paperwork to prove the break was legitimate.

Experts on the press and democracy say the cries of “fake news” could do long-term damage by sowing confusion and contempt for journalists and by undermining the media’s role as a watchdog on government and politicians. They say it’s already exacerbated the lack of trust in media by conservatives and contributed to a hostility that sometimes turns violent.
In the last year, at least three political figures have been implicated in physical assaults on reporters asking questions, while journalists have been attacked in dozens of other incidents by protesters, according to the U.S. Press Freedom Tracker.
“I worry about the ongoing attack on the legitimacy of the media by President Trump and some of his supporters. The press is hardly perfect, of course, but it is also an important mechanism of accountability for people in power,” said Brendan Nyhan, a professor of government at Dartmouth College. “This kind of rhetoric is potentially corrosive to trust in the media and to people’s willingness to accept information that is critical of politicians they support.”
Nyhan was among the authors of a recent study for the Poynter Institute that found partisan divisions in the public’s attitudes toward the press. More Democrats now have more faith in the press, while Republicans have far more negative views and are “more likely to endorse extreme claims about media fabrication, to describe journalists as an enemy of the people, and to support restrictions on press freedom,” the study found.

The routine labeling of factual reporting as “fake news” comes as actual fake news proliferates on the internet.
Media researcher Craig Silverman helped popularize the term in 2014 as a label for completely fabricated stories written and spread by individuals seeking profit. Now the news media editor at BuzzFeed, he wrote recently that he cringes when he hears anyone use the term, which he said became a partisan weapon after Trump’s election in 2016.
Silverman wrote that political figures are manipulating social media to “literally brand real things as fake” and manufacture reality for their followers.

In this Thursday, March 1, 2018 photo, Idaho Republican state Rep. Priscilla Giddings sits at the Capitol in Boise. The Idaho lawmaker urges her constituents to send in submissions for her “fake news awards” during the legislative session. Officials at all levels of government are now using the term “fake news” as a weapon against unflattering stories and information that can tarnish their images. (AP Photo/Kimberlee Kruesi)

The governor of Maine, the vice chairman of Trump’s now-disbanded voter fraud commission, a New Mexico congressional candidate and the Georgia secretary of state are among the many politicians who have used the term in recent months in response to news reporting. A California school board president (Brooke Ashjian of Fresno Unified) repeatedly used the term to attack a journalist (The Fresno Bee’s Mackenzie Mays) investigating the area’s high rate of teenage pregnancy and its sex education policies.
The cries of “fake news” create a quandary for reporters, who want to defend their stories while also not giving credence to the charge.

Fight Back or Ignore?

“Our members, many of whom work for small news outlets, are bearing the brunt of these unwarranted attacks, and it’s completely unfair. These are people who are serving the community,” said Rebecca Baker, president of the Society of Professional Journalists. “Some are just ignoring it, and some are fighting back.”
Baker suggests that journalists respond to the attacks by showing their work as much as possible — by sharing the audio, video and documents that back up their stories. She wonders whether the term is starting to lose its clout from overuse, but also worries that whichever party controls the White House, Congress and state governments in the future will continue to use the tactic.
“This is part and parcel of the polarization of our politics right now,” she said.
About the Author
Ryan J. Foley is an Associated Press reporter. Follow him on Twitter, @rjfoley
Sunshine Week
GV Wire published this story with permission of the Associated Press in celebration of Sunshine Week, March 11-17, 2018. Sunshine Week champions access to public information and transparency in government throughout the country.