The support for deposed Central Unified Superintendent Mark Sutton appears strong.
A private Facebook group called “Central United” consists of more than 1,200 members, mainly those from the Central Unified community. Some of the posts discuss the most recent boys’ basketball championship. Most deal with the Sutton aftermath.
Some are advocating the recall of some board members and voting the rest out in November. Some are taking orders for “Support Mark Sutton” buttons.
Last week (Feb. 27), the board fired Sutton on a 4-3 vote unaccompanied by a public explanation. Rumor and innuendo are circulating as to what the reasons were, but GV Wire has yet to verify any of them.
While the Central Unified Board of Trustees meets Tuesday night (March 6) to discuss hiring an interim superintendent, a grassroots movement of parents and teachers is picking up momentum on social media.
Many members of the Facebook group are angry. Discussions delve into the intricacies of the recall process, encouragement for attending union meetings and Tuesday’s special board meeting, and thoughts on how to return Sutton to his post.

Who Can Trust the Board?

Jonathan Pantages is a parent and Sutton supporter. He questions the reasoning for the board’s dismissal of Sutton.
“I feel like they are hiding behind ‘a personnel issue so we can’t discuss it.’ If there was wrongdoing, a legit reason, it would have been a 7-0 vote. It smells fishy. We are not going to get an explanation.”


“It smells fishy. We are not going to get an explanation.”—parent Jonathan Pantages
Pantages says that he never focused on district politics until the Sutton issue came to the forefront.
“The activism is good. I haven’t been involved, paying attention. I focus on my kids’ school. All of a sudden, this big issue awakened the community. We can control this by getting out there and voting. We want to send a message: We are in charge.”
His final thought echoed what many expressed on the Facebook page: “Who can trust the board at this point?”

Board of Trustees President Cesar Granda has been dealing with constituents about his vote for the past week. 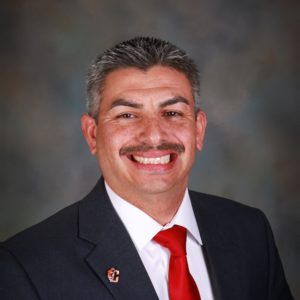 “Nobody likes change. It was unpopular,” he told GV Wire.

“Nobody likes change. It was unpopular.”—Central Unified School Board President Cesar Granda
But he stands by his vote: “Collectively as a board, we decided to move forward. I do wish Mark (Sutton) the best in his future.”
Granda says privacy laws prevent the trustees from revealing why they fired Sutton.
“I wouldn’t say it’s frustrating that we might not seem to be transparent, but the employee has rights,” he said.
For Tuesday’s meeting, Granda anticipates a closed session lasting up to an hour talking about an interim superintendent. Granda also intends to ask the district’s legal counsel about the differences between an acting and interim superintendent, as well as compensation issues.
“We are starting fresh,” he said. “I want to educate myself on the process.”
Granda did not identify potential candidates but did mention that Central has “three, very-well trained assistant superintendents.”

The meeting takes place at the district office (5652 W. Gettysburg Ave., room 4), starting at 6 p.m. The agenda opens with public comment before the board meets in closed session. The trustees will announce a decision, if any, when they reconvene in regular session.