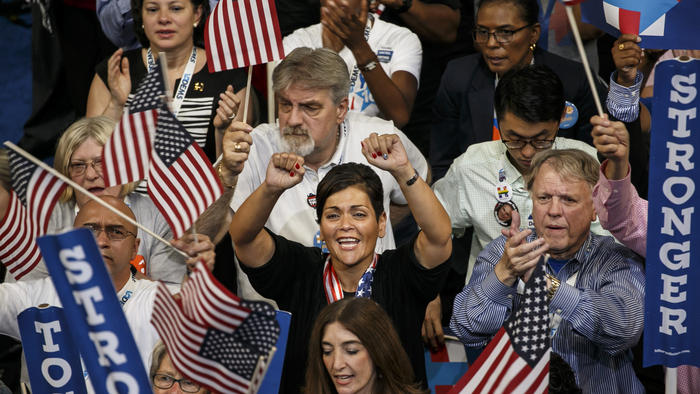 In Dan Walters’ Feb. 28 CALmatters column, he recaps some of the proceedings of the California Democratic Party convention, which observers noted was particularly divided ideologically.
Walters writes that, while the convention may represent the trends at play in the party across the state, “one should never judge the true tenor of a political party by what happens at its convention.”
United on issues like their opposition to Trump, delegates were furiously divided over congressional nominations, and most strongly in the races for U.S. Senate and governor.
Walters briefly details the rhetoric employed by the candidates and explains that it was all aimed at earning the votes of delegates – 60% of the vote was required to ensure an endorsement.
The results show no winners, but did show the delegates’ ideological split from the state’s party as a whole, Walters writes.
In the most recent statewide poll, conducted by the Public Policy Institute of California, 67% of Democrats supported Senator Dianne Feinstein for re-election to the Senate over her challenger, state Sen. Kevin de León – a wide margin.
However, Feinstein received only 37% of delegate votes to de León’s 54%.
In the governor’s contest, Walters writes, the differences were similarly pronounced.
Lt. Gov. Gavin Newsom, the race’s current leader, showed the closest resemblance – with 32% of Democrats and 39% of delegates in support.
After that, the differences were vast.
State Treasurer John Chiang, currently polling at 14%, earned 30% of the delegate vote, while Delaine Eastin, polling “dead last” with 6%, got 20% of the support from delegates.
Meanwhile, Antonio Villaraigosa, widely considered the most likely challenger to Newsom in the November general election, finished with only 9% despite tying Newsom statewide in the PPIC poll with 32% Democratic support.
After explaining these details, Walters closes abruptly, stating simply that party delegates – no matter the party – are significantly disconnected from the sentiment of those they are supposed to represent.
To read Walters’ full piece, click here: Democratic convention shows disconnect with voters