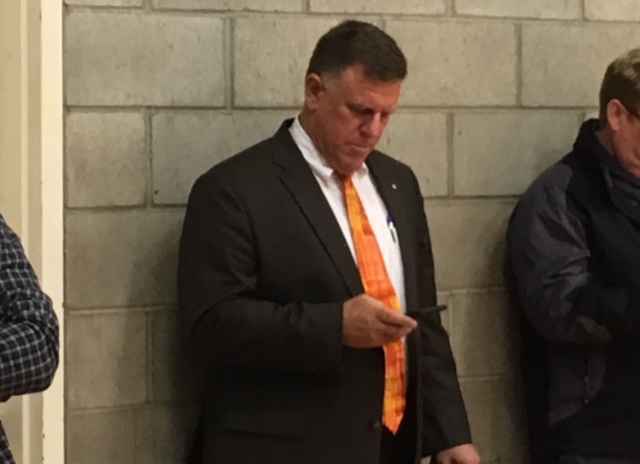 Amid an angry group of parents, the Central Unified school board voted 4-3 to dismiss Superintendent Mark Sutton at its meeting Tuesday (Feb. 27) night.
It is a case of déjà vu for Sutton. Prior to taking over as Central’s superintendent in August 2015, he was dismissed by the Selma Unified school board.
Sutton served as the Selma superintendent for seven years before his 2015 termination.
Just like in that case, the board gave no concrete reason as to their decision.

Board Votes Sutton Out

The school board meeting opened on the east campus of Central High School with a pre-closed session public comment period. Many community members, but not all, spoke in favor of Sutton, demanding that the board extend his contract and the process be transparent.
The board then met in closed session, with Sutton’s future on the agenda.
Sutton was not in the closed session. GV Wire spoke with him briefly, as he remained in the auditorium where the meeting took place. He desired to remain as superintendent, but it was not his decision.
When the board returned, president Cesar Granda announced the closed session decision: the trustees voted to supply Sutton his 10-day notice of termination. No reason was given.
Voting in favor of the termination: Granda, Ruben Coronado, Rama Dawar and Richard Solis.
Voting against were Phillip Cervantes, Terry Cox and Richard Atkins.

Sutton did not stick around to hear the announcement. His seat next to Granda on the dais remained empty. It was occupied at the start of the meeting.
GV Wire found Sutton still on campus at the gymnasium, watching the Central High School playoff basketball game. A bit forlorn, he did not want to comment.
Granda spoke with the media after the meeting. Citing privacy and closed session laws, he did not divulge why the trustees removed Sutton.
The board did not name an interim superintendent either, since that was not part of the agenda, according to Granda. The three assistant superintendents are in charge for the time being.

Parents streamed out of the meeting once Granda announced Sutton’s dismissal. One leader of a grass roots parental group voiced her extreme displeasure..
“I don’t even know what to tell our children about the democratic process,” said parent Wendy Yribarren. “This board is going to be recalled. There will be consequences for this board.”
Recall is the similar fate the Selma trustees faced in 2015. Voters ousted three of them in November of that year, following Sutton’s firing.
Granda, Coronado, Atkins and Dawar’s terms end at the end of the year. They are eligible to run again.
When asked if he would, Granda would not provide a direct answer.
Check back with GV Wire for more on this story.