A grassroots group of parents served the two trustees at the Feb. 13 board meeting. The parents are unhappy about the secrecy surrounding whether Superintendent Mark Sutton will remain with the district.

Raquel Camacho, aided by Cathy Riddlesprigger, expressed unhappiness with the board not extending Sutton’s contract, which expires at the end of June.

Other Trustees Are Up for Reelection

Camacho said she targeted Cervantes and Solis because they are perceived to be against extending Sutton’s contract and are not up for re-election this year. Both were elected to four-year terms in 2016 (a third member elected in 2016, Terry Cox, has supported a public discussion on Sutton). Camacho said the remaining four members will have their fates decided by voters in November.

Many parents spoke at last week’s meeting, questioning why Sutton, who reportedly received high marks in his evaluation, has not had his contract renewed. Sutton’s name was last on the closed session agenda Jan. 9, but the board took no action.

Cervantes declined to comment, citing a board policy that only the board president and/or superintendent can speak to the media.

Calls to board president Cesar Granda, Solis and Sutton were not returned by time of publication. 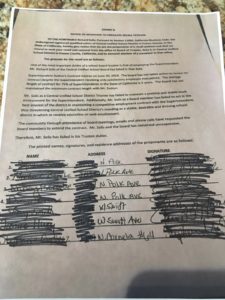 Copy of the recall notice presented to Central Unified trustees Cervantes and Solis. 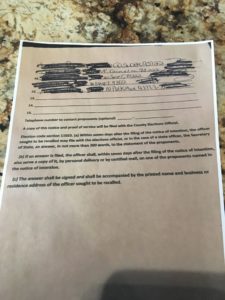 Copy of the recall notice presented to Central Unified trustees Cervantes and Solis.

Fresno City Councilman Steve Brandau says he is continuing to craft an ordinance that could allow more home development on the fringes of the city.

The council approved a farmland mitigation measure in December 2014 as part of the 2035 General Plan. The concept is to preserve agricultural land while steering new development to infill areas. In reality, the only areas zoned as farmland that could be developed are in southwest and southeast Fresno.

Brandau says he is meeting with his staff and city attorneys to write an ordinance that can pass legal muster. He plans to also work with the Fresno County Farm Bureau and developers like Granville Homes.

(Disclosure: Granville Homes is the corporate owner of GV Wire).

As to when a proposal may be in front of the council, Brandau could not give an exact timetable.

The Cost of Graduation

What is the rental for the building? $118,500. The Fresno Unified school board will ratify a contract with the city’s premier arena at Wednesday’s board meeting (Feb. 21). The amount represents renting the arena and all the necessary staff for four days (June 3-6).

With 3,000 students estimated to graduate, that comes out to $39.50 each. However, there is no charge for family and friends to attend.

The board will vote on renaming the Roosevelt High School theater after one of its most famous alumna, Audra McDonald. The winner of a Tony (six times), Grammy (twice) and an Emmy, McDonald “has made a monumental contribution to the global arts community” according to the staff request.

McDonald tweeted her appreciation of the impending honor:

Totally blown away by this honor. I loved my high school so so so much. @RSA_Magnet #RooseveltRoughRiders https://t.co/6FIwSUyMcY

A few more potential candidates have pulled papers to run for Fresno City Council. The deadline is March 9.

In District 1, incumbent Esmeralda Soria plans to run for re-election. Rolando Moncivais, an employee at Bonadelle Homes, pulled papers to run, but says he has changed his mind.

The race drawing the most candidates is District 3, where Oliver Baines terms out in January 2019.

Larry Burrus an engineer/general contractor, filed his paperwork today (Feb. 20). Others in the race include:

In District 5, incumbent Luis Chavez plans to run for re-election. Others pulling papers include Paul Condon and Paula Yang. Condon pulled papers to run in the past for mayor, but his name did not appear on the ballot. Yang is a news anchor on Hmong TV.