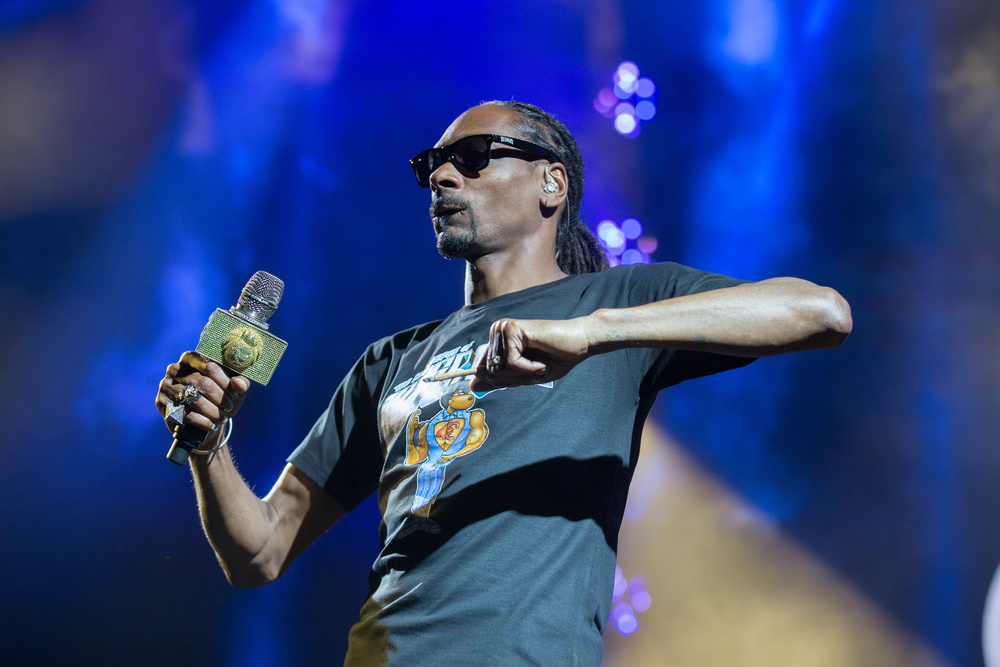 Grizzly Fest is a go at Woodward Park.
Council voted 5-2 last week to allow the promoters of the two-day event to use the north Fresno park for a price of $100,000. The music and entertainment festival is scheduled for May 18-19.
By the city clerk’s count, 19 public speakers spoke, nearly evenly divided.
The most interesting moment during the 90-minute debate came when Dana Scott Schilperoort spoke — or more accurately, rapped — lyrics (see video above; Note: GV Wire buzzed out the naughty words; the silence is from the original video; listen to the Dr. Dre/Snoop Dogg version NSFW) from the headline act: Snoop Dogg.
The lyrics were crude and contained a series of four-letter words improper for print. Council president Esmeralda Soria shut down Schilperoort .
“Sir, sir, sir, sir, we are not going to allow that. …” Soria told Schilperoort.
“Oh, but we are going to allow Snoop Dogg to be in our community?” Schilperoort responded, facing the audience.
When Schilperoort attempted to continue with more of Snoop Dogg’s greatest hits, his microphone went silent.
“Sir, if you can to continue to … you blocked him?” Soria can be heard saying.
It is not clear who shut off Schilperoort’s mic or if it was done because of language or because he had turned away from the council to speak directly to the audience. Councilman Oliver Baines reminded the speaker to address the council, not the crowd (as dictated by Rule 12(b) of council procedures and Sec. 2-312 of the Municipal Code). Baines told GV Wire that council members do not have access to a switch to cut off the lectern microphone.
As Schilperoort continued again with an open mic, Soria reminded him his two minutes of speaking time had expired and asked him to step away. The audio again went silent, as a security guard ushered Schilperoort away, to the applause of the crowd.
But did Soria’s actions violate council policies and the First Amendment?
According to the Rules of Procedure for the City Council of the City of Fresno, 12(f), regarding order and decorum:
Any person who willfully engages in conduct which is designed to or is likely to provoke others to violent or riotous behavior, disturbs the peace of the meeting by loud and unreasonable noise, engages in other disruptive conduct which substantially interferes with the orderly conduct of business before the Council, and who fails, upon request of the Presiding Officer to cease such activity, shall be forthwith barred from further attendance at such meeting unless permission to and/or address the Council is granted by a majority vote of the Council. A person violating this subsection shall be guilty of a misdemeanor.
There is no specific language in the rules or the Fresno Municipal Code as to whether foul language is considered disruptive conduct.  The First Amendment limits the government’s right to restrict speech.
However, one government accountability group said that Soria may have been within her rights.
“Council does have the authority to restrict language used by a speaker, in terms of civility. A city council does not have to put up with profanity and obscenity, Terry Francke, general counsel with Californians Aware, told GV Wire.
Soria did not respond to GV Wire’s request for comment by time of publication.

Today (Feb. 12), is the first day Fresno city council candidates can officially file to run for office and fundraise.
According to the city clerk’s website, four candidates have filed paperwork to run for District 3: Tate Hill, Daren Miller, Kimberly Tapscott-Munson and Sean Sanchez. Other candidates who have expressed interest but have yet to officially file include Barigye McCoy and Craig Scharton.
Current councilman Oliver Baines is termed out.
In District 7, Nelson Esparza, Veva Islas and Brian Whelan have turned in their paperwork. Councilman Clint Olivier is termed out.
For District 1 and 5, incumbents Esmeralda Soria and Luis Chavez (respectively) have filed.
The county clerk also has a role in accepting nomination papers, and sometimes the county and city lists do not match up. For example, the county list also has Rebecca Wardwell filing paperwork to run in District 3. Her name is not on the city clerk’s list.
The filing period ends March 9.

U.S. Secretary of Agriculture Sonny Perdue will visit a number of farms during a three-day tour of the Golden State.
Starting Tuesday (Feb. 13), Perdue will visit the opening day of the World Ag Expo in Tulare.
On Wednesday, Perdue will tour Porterville Citrus, and Giacomazzi Orchard in Visalia. He then heads to Hanford to visit Fowler Packing, and DeGroot Dairy. From there, it is off to the Harris Woolf Almond Company in Coalinga. He’ll round out the busy day with stops in Gustine, Hollister and Tres Pinos.
Thursday morning, Perdue visits Uesugi Farms in Gilroy.

Bessinger Added to Air Board

Drew Bessinger is now officially a member of the Valley air board.
In a complicated selection method (described here), the Clovis city councilman won approval from the San Joaquin Valley Special City Selection Committee on Jan. 31, by a unanimous 35-0 vote.
Bessinger occupies the seat that was held by Fresno City Councilman Oliver Baines. His term on the air board expired at the end of 2017.
Bessinger’s first meeting is this Thursday (Feb. 15), 9 a.m. at the district office in Fresno.

Roy Vasquez is moving on from the Fresno Planning Commission — and from Fresno. The longtime commissioner has accepted a position at Oxnard College in Ventura County.
The city honored him at the Feb. 8 council meeting.
Mayor Lee Brand has not announced an appointment to fill the vacancy.

Today I was pleased to honor my friend and fellow @TheRHSRiders alum Roy Vasquez for his 15 years on the planning commission. He leaves to become VP of Academic Affairs at @OxnardCollege We proclaimed today “Rojelio ‘Roy’ Vasquez Day” in the @CityofFresno pic.twitter.com/lq3wwizmin

The family of the late Harry Armstrong will hold a memorial service this Thursday, Feb. 15 at 12:30 p.m. The longtime Clovis city councilman passed away Jan. 18 at the age of 87. He retired from the council last year after four decades of public service.
The memorial and dedication of a Highway 168 interchange will be preceded by a lunch buffet at 11:30 a.m. at the Clovis Veterans Memorial District building. The public is welcome.

Gov. Jerry Brown appointed two Valley residents to a high-tech advisory board. Jose Gonzalez of Atwater and Janell Miller of Clovis will join the Computer Science Strategic Implementation Advisory Panel.
The new 23-member group, formed by a state law that went into effect last year, will help the state Dept. of Education develop guidelines to teach computer science in schools. The first meeting is March 1 in Sacramento.
Both Valley members are involved in education: Gonzalez is the superintendent of the Planada Elementary School District; Miller teaches at Washington Academic Middle School in the Sanger Unified School District.
Gonzalez is a Democrat; Miler is a Republican. There is no compensation for board members.

Give Credit Where Credit Is Due

Kudos to Valley Public Radio (KVPR-FM 89.3) for last week’s scoop on an immigration detention facility in downtown Fresno hidden in plain sight. They first ran the story Feb. 6.
In the copycat nature of media, other local TV stations picked up on the story as well. ABC 30 reported about it on Feb. 7; CBS 47 on Feb. 8. Neither group credited KVPR for first reporting the story. The TV stations also interviewed immigration attorney Camille Cook; KVPR talked to her first.
Neither news director replied to GV Wire’s request for comment.

Latest in Battle for CA-22: Is Nunes Feeling the Janz Heat?