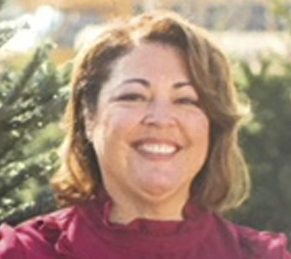 California’s campaign watchdog is looking at another contestant in the Fresno City Council District 7 race.
Veva Islas is accused of sending out campaign material without properly identifying who paid for it. The Fair Political Practices Commission is reviewing.
Islas mailed holiday cards with a picture of her and her family on the front, and a message on the back saying “Veva Islas For Fresno City Council—District 7” along with the note “#VoteVeva2018.” 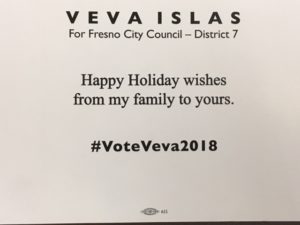 Back of the Islas holiday card. A complaint was filed to FPPC about the omission of who paid for it.

Fred Vanderhoof, chairman of the Fresno County Republican Party filed the complaint with FPPC. He is a supporter of Brian Whelan, who is also running for the District 7 council seat.
FPPC sent a letter to Islas’ campaign, dated Jan. 17, advising her of the filed complaint. An FPPC spokesman said this does not necessarily mean an investigation is coming, rather they will look to see if the case has merit. The maximum fine is $5,000 per violation.
The FPPC letter alleges “a mass mailing on behalf presumed to have been sent by or on behalf of the committee failed to include the “Paid for by” disclosure as required in the Political Reform Act.”

Islas Vows Not to Repeat Mistake

Islas acknowledged that she made a mistake during an interview Monday afternoon.
“I will honestly say that I made an error when I sent those documents out with an omission of a disclosure of who they were coming (from),” Islas told GV Wire.
Islas said the cards were paid from her campaign account, with money lent to herself.
She is now using a campaign consultant and vows not to repeat the mistake.
Last year, the city of Fresno and a third candidate in the race, Nelson Esparza, entered into a settlement agreement after an FPPC complaint alleged he raised money before the legal deadline.

Per city law, candidates are not allowed to raise money until the official start of nominations for the office on Feb. 12. 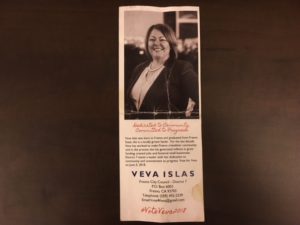 A flyer by the Islas campaign, provided by a District 7 resident.

A resident also provided GV Wire with a second piece of campaign material from Islas, but it is not referred to in the FPPC complaint.
[Update, 1/30/2018: an FPPC spokesman says they did receive a complaint about the flyer, also filed by Vanderhoof. “It was rejected because it was a flyer, not a mailer. The law refers to mailers,” FPPC spokesman Jay Wierenga says.] Regarding questions about her residency that have come into GV Wire, Islas says she was born in Fresno, raised there and Kern County. Until Jan. 2017, she lived in Tulare, before moving back to Fresno, where she resides on East Princeton Avenue.
Islas, Whelan and Esparza are running to replace Clint Olivier, who is termed out in Jan. 2019.
Stay tuned to GV Wire for an upcoming Take 5 interview with Islas.
Related Topics:Brian Whelancampaign financecity councilClint OlivierDistrict 7FPPCFred VanderhoofFresnoNelson EsparzaVeva Islas
Up Next

Iranian Reform Opportunity Has Passed, But Will Likely Come Again