Pro Wrestling's Most Iconic Moment Happened in Fresno 20 Years Ago. And It Featured Mike Tyson 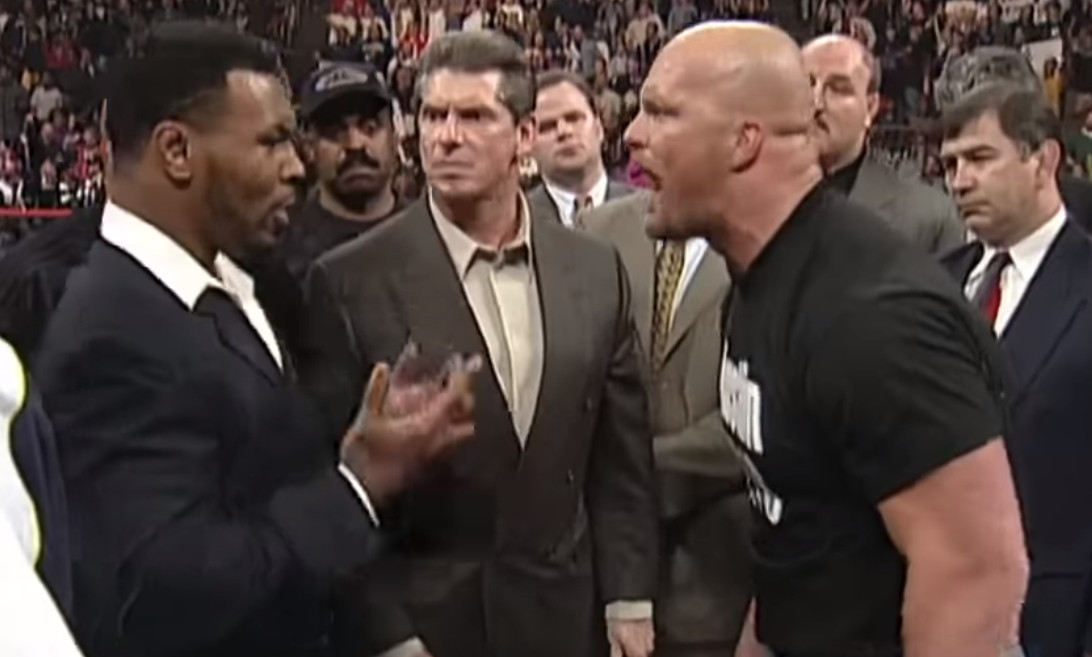 The fate of the WWE turned in one moment, 20 years ago this Friday (Jan. 19) in the middle of a Fresno ring.
“Stone Cold” Steve Austin confronted “Iron” Mike Tyson in an iconic moment on the iconic wrestling TV show “Monday Night Raw.”
The result skyrocketed Austin to the wrestling superstar stratosphere. It helped Tyson rehabilitate a battered image. And, it propelled the WWF (as it was known in 1998) back to being the leading brand name in the wrestling industry.


“In hindsight, it was a huge moment in wrestling history.” — Wrestling Observer Newsletter publisher Dave Meltzer.
.
“Raw” celebrates its 25th anniversary Monday with a special airing on the USA Network. Through 1,287 episodes, thousands of matches and hundreds of legendary wrestlers, the Austin-Tyson confrontation is considered by many as the most important moment in the show, if not the business.
“That was the launching pad to the biggest numbers ever,” Vince Russo told Austin recently on his podcast. At the time, Russo was the head WWF writer.
In the Jan. 15, 2018, Sports Illustrated, WWE executive Paul Levesque (aka wrestling legend Triple H) listed the Austin-Tyson confrontation as Raw’s most memorable moment.

WCW Had WWF On the Ropes

Led by the ambition and vision of owner Vince McMahon, the WWF established itself as the brand name in the wrestling world by the mid-1980s. He had changed a business that was based mainly on athletic achievement in the ring to something that was more entertainment-based.
The WWF meant larger-than-life performers like Hulk Hogan, Andre the Giant and Roddy Piper. No other wrestling organization could touch them, and most faded away. Only one remained to challenge the WWF, World Championship Wrestling owned by Ted Turner.
WCW debuted its Monday night wrestling show “Nitro” in 1995 to go head-to-head with Raw. That competition led to an unprecedented success for both organizations and the wrestler’s paychecks, in an era known as the Monday Night Wars.
By 1998, WCW took over as the top wrestling promotion, relying on stars of the WWF past who still retained drawing power: Hogan, Piper, Randy Savage, along with homegrown stars like Sting and Ric Flair. They were in the middle of an 83-week ratings win streak when McMahon pulled no punches to turn the tide.
Three years later, McMahon purchased WCW, vanquishing his last competitor.

Austin started to emerge as a break-out star, when the definition of wrestling good guy, or babyface, changed. Fans no longer cheered a law-abiding, patriotic hero. They yearned for someone edgy, someone willing to fight for justice down and dirty.

Iron Mike Bites Back into the Mainstream

Tyson established his boxing dominance in the 1980s, but never left his thuggish image behind. When Tyson stepped into the ring in Fresno, he was in the middle of a suspension for the Evander Holyfield biting incident.
That made him the perfect person to interject into a pro wrestling storyline. A legit tough guy, with a touch of evil and a legit wrestling fan to boot, Tyson guaranteed the WWF would draw mainstream attention.
Russo also mentioned on Austin’s podcast that McMahon sold Tyson on coming in by saying it would help repair his battered public image. 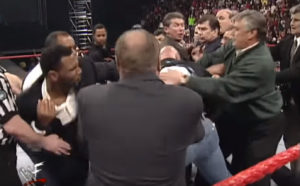 Raw came to Fresno at the Selland Arena on Jan. 19, 1998. The previous night, Austin won the Royal Rumble on pay-per-view, guaranteeing a championship match at WrestleMania, the WWF’s top event of the year. Tyson watched the event from a skybox, cheering on all the action.
The two-hour episode built to a special announcement by McMahon involving Tyson. Segments during the show saw Tyson engage with wrestlers backstage, usually in a positive manner.
Finally, McMahon introduced Tyson to the audience, calling him “The Baddest Man on the Planet.” Fans knew there would be no way Stone Cold could let a comment from his enemy go unanswered.
Out came Austin, and in stepped dozens of referees, WWF officials and Tyson’s entourage to separate the two.
Stone Cold was having nothing of it.
“I’m sick and tired of seeing Mike Tyson,” Austin said, right in the ex-boxing champ’s face. Austin continued his taunts and boasts — to the approval of the Fresno crowd.
“I want a piece of Mike Tyson’s ass,” Austin said. “You call yourself the Baddest Man on the Planet? … Do I think I can beat your ass? Oh, hell yeah!”
Austin then followed it up with double-middle fingers. Tyson shoved Austin and history changed.
“The cash registered started ringing right then,” Austin recalled on his podcast. 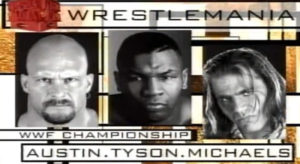 Tyson served as referee for that WrestleMania title match. In the lead-up to the event, Iron Mike sided with Austin’s opponent, Shawn Michaels, and his group, D-X.
Alas, it was a swerve. When the moment of truth came to count the pin for Austin, Tyson pounded the mat for the 1-2-3. He knocked out an upset Michaels and celebrated with Stone Cold.
“In hindsight, it was a huge moment in wrestling history,” Wrestling Observer Newsletter publisher Dave Meltzer said.
Meltzer reported the PPV buy rates for WrestleMania increased more than 200% from the prior year.
“This angle took Austin to a different level as a star and set the stage for WrestleMania as we know it now,” Meltzer observed.
“The turnaround in WrestleMania came due to Tyson and Austin.”
Austin eventually retired from the ring after establishing himself as one of the greatest drawing stars in wrestling history.
Iron Mike continues to tour the country performing his one-man show, his image rehabilitated.