The debate about California’s high taxes rages on.

Democrats defend them, saying they are necessary to provide residents the services they need, and point to the state’s $2.6 trillion economy as evidence that California’s tax structure isn’t strangling businesses or wealthy individuals.

Republicans counter that the high taxes drive rich individuals to states with less burdensome tax codes. They often say that wealthy Californians are fleeing to states such as Texas, Nevada and Arizona for tax breaks. The economy would be even bigger with lower taxes, the argument goes.

So, what do the numbers tell us?

For starters, from 2011 through 2015, California lost a net total of $10 billion in adjusted gross income due to out-of-state migration.

The numbers also indicate that although many affluent Californians are leaving — taking with them large chunks of potential tax revenue — poorer residents are exiting both in large numbers and at a higher rate.

Here’s how these calculations were made. 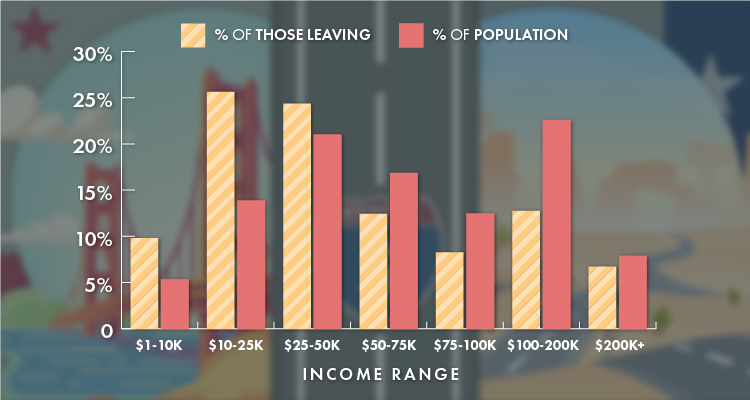 One might argue that this formula is flawed — the fact that there are simply fewer residents in those brackets could skew the numbers so a smaller sample creates an inflated, misleading rate. However, there is also evidence that these groups exceed their portion of the total population.

Finally, in terms of raw numbers, we can see that the trend continues. While the bottom three income brackets only make up approximately 40% of the population, they account for a yearly average of around 10,000 more net emigrants than the remaining four brackets.

As a result, we see what we would expect from the average: The net total over the six-year period shows a loss of about 40,000 more lower-income individuals than from the top four income brackets.

What does this tell us?

A conclusion can be drawn that while wealthy California families are seeking tax relief elsewhere, those struggling to make ends meet are leaving at an even higher rate.

A recent Sacramento Bee article, drawing from Census data, found that California has the highest rate of “supplemental poverty.” This measure factors cost of living into the poverty equation. Using the supplemental poverty measure, 20.4 percent of Californians lived below the poverty line in a three-year average of data from 2014, 2015 and 2016. Nationwide, the figure just 14.7% of the population.

In many cases, the financial strain for these residents is such a burden many choose to leave the state completely.

In fact, without cost-of-living adjustments, California only ranks at No. 16 with a slightly above-average rate of 14.5% poverty (nationwide average is 13.7%). In other words, the prohibitive cost of living in California is increasingly exacerbating the strain on its lowest-income residents.

In many cases, the financial strain for these residents is such a burden many choose to leave the state completely. One of the most integral living costs, housing, has been the most significant contributor to the heightened tension.

A September 2017 PPIC survey found that “about four in ten Californians say the cost of their housing is making them seriously consider moving away from the part of California they live in now.”

When broken down by age, the poll found that younger residents are much more likely than older residents (54% to 30%) to make this claim. This highlights the fact that younger residents, who typically receive lower salaries, are feeling the tightest crunch when it comes to housing. This trend is concerning for obvious reasons: Young people are the future and our state needs to retain a critical mass of employees to keep our industries productive and our economy moving ahead.

This trend could also be attributed to the fact that younger individuals are simply less likely to be tethered to a single place by family, work, or other obligations. Those who are homeowners, and have that distinct tie to their location, are less likely to report considering a move.

However, when the sheer proportions of those looking to leave are as overwhelming as these, and particularly when a majority of those who “seriously consider moving say they would leave the state rather than relocate within California” (33%), the numbers suggest some cause for alarm.

This PPIC study also shed light on the regional differences in perceptions of affordability.

Compared to every other surveyed region in the state (Inland Empire, Los Angeles, Orange/San Diego and San Francisco/Bay Area), Central Valley respondents rated both personal housing costs and perception of housing affordability in the area as less serious issues. While Inland Empire respondents also reported better-perceived affordability, those in the other regions reported serious affordability concerns for their region as a whole.

Those in coastal regions were also more likely to state an intent to move (46% to inland’s 36%) — and were more likely to be looking to move out of state (35% to 29%). However, they are also more inclined to move to a different area within California, with survey respondents from the coast 4% more likely to report considering an in-state move. These results make it clear that the pinch is tighter in these coastal, urban communities.

A Berkeley IGS poll, also released in September, reached similar conclusions to the other surveys. It found that 48% of registered voters in California describe the problem of housing affordability in their area to be “extremely serious,” while another 36% say it is somewhat serious. 56% of respondents stated that their housing costs made them consider moving and 25% said that move would most likely be out of state.

Overall, the polls indicate a severe affordability issue (or at least the perception of one) that is bringing the future success of the state into question.

Where are they going?

A wide range of articles have highlighted the mass migration from California to Texas, and they are correct in doing so.  In the six-year period, Texas saw the largest net inflow of former California residents – a total of just over 50,000 residents over that time span.

Next was Nevada (which like Texas has no income tax), with a net flow of just over 34,000. Oregon, with just over 21,000 net immigrants, and Arizona and Washington, at just over 16,000, rounded out the top five destination states for Californians.

Essentially, it seems that many of those leaving are looking to stay on the West Coast, but just cannot deal with California’s affordability obstacles any longer.

When comparing the tax burden between California and these states, an analysis of 2017 “total tax burden” by Wallethub ranks California 10th in highest burden.

Compared to California, Housing Elsewhere is a Bargain

Furthermore, according to Zillow, median home prices in these states are also much lower than in California. Here in the Golden State, the median listing price for August 2017 was $499,000.

Essentially, these disparate figures show that those under financial pressure in California have plenty of other, more affordable options.

If the market fails to sort things out soon and our politicians continue to fumble with solutions, we may have a lot more than $10 billion in lost taxable revenue to worry about.