Hope and optimism are back at Bulldog Stadium. After Saturday’s 38-0 smushkying* of New Mexico, Fresno State finds itself alone in first-place in its division. Next week’s game at San Diego State will prove if the Bulldogs really are this good.

The electricity is back. The pre-game tailgate was abuzz from the simple game of cornhole to the fancy beer and barbecue. Some companies ponied up for live music and full-on tents. I checked out the party at the game’s official broadcaster, 940 ESPN. A young, hip crowd didn’t mind waiting in an interminably long line to redeem a ticket for a 12-ounce beer.

There is nothing like watching and listening to a college band, full of energy and noise.

Every victory helps erase the 1-11 crater that was the 2016 season. Head Coach Jeff Tedford has the faithful believing, and that is almost as important as actual wins, which he is delivering, too.

“It’s validation that the hard work and energy (the players) put into it,” Tedford said at his post-game news conference. “We’ll enjoy this for a little bit, and then get back to work tomorrow.”

Tomorrow seems to be here. The Bulldogs are in first place in the Mountain West Conference west division, after San Diego State fell to Boise State on Saturday. A victory over the Aztecs would give Fresno State a two-game lead and an inside track for the conference title game. With four victories already, Fresno State is two games away from qualifying for a bowl game.

Saturday’s game was an all-around beatdown of the Lobos. Total yards: 526-322; 4-for-4 in the red zone with three touchdowns; a near 300-yard passing game for Fresno State QB Marcus McMaryion. The only number in the box score that should leave any concern is total attendance: an announced 28,090. The listed capacity is 41,031. That’s only 68% of a full house.

Where are the fans? After all, this was homecoming weekend. The night before, a capacity crowd flocked to the Save Mart Center for the Top Dog awards, recognizing important alumni.

Bulldog Stadium may be need some TLC, but this team is good and momentum is building.

It’s hard to find any singular reason why the Bulldogs aren’t attracting more fans. The weather, with a game-time temperature of 70 degrees, clear with a slight breeze, was perfect. Sure, the Big Fresno Fair was going on, but would that really prevent a full house?

Things started well. Fans came out for Week 1 against an inferior opponent in Incarnate Word. Perhaps it was the jersey retirement ceremony of Derek Carr that drew the 39,447 more than anything else. After known-in-advance drubbings on the road at top-10 teams Alabama and Washington, the Red Wave can be excused for being skeptical. Attendance dipped to 27,434 to watch Fresno State thump Nevada on Sept. 30. 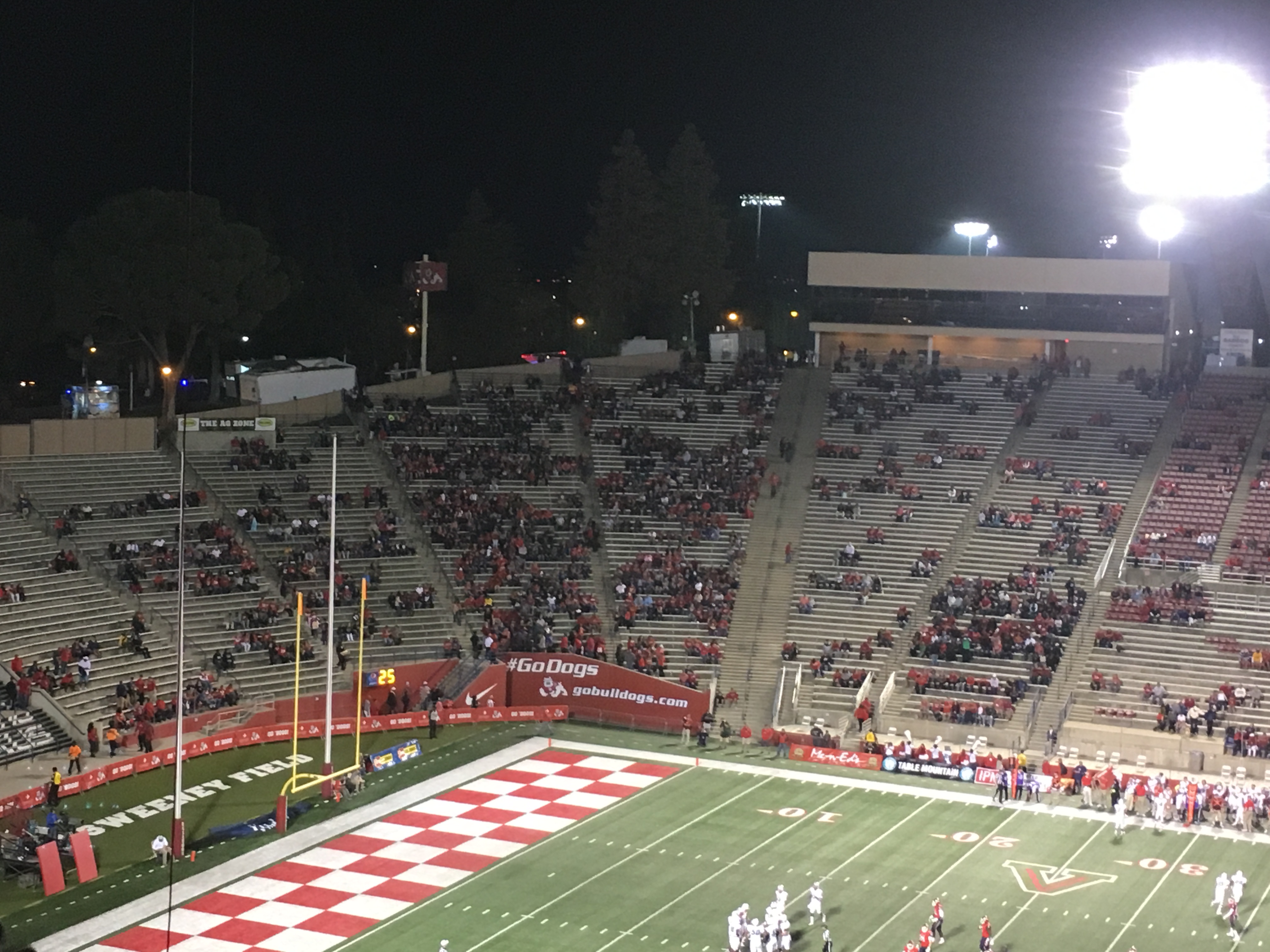 A look at the corner end zone during the first quarter at Bulldog Stadium for New Mexico at Fresno State, Oct. 14, 2017 (Photo: David Taub)

The Bulldogs are halfway through their home schedule: games remain against UNLV (Oct. 28), BYU (Nov. 4) and the regular-season closer against archrival and perennial conference kingpin Boise State (Nov. 25).

This is supposed to be a great sports town that supports the home team. In two weeks, the Red Wave will have an opportunity to prove it.

(*Smushky: a Taubism that means to smother, beat up, beat down, destroy, or otherwise dominate.)