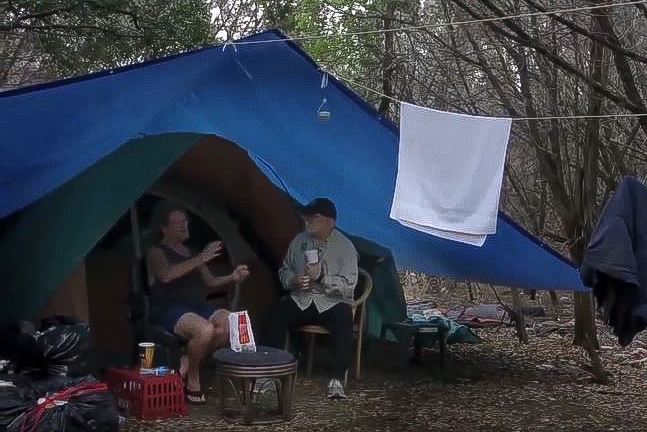 Opinion by
Bill McEwen
Like a lot of people around the country, many Fresnans are fed up with the impacts of homelessness.
They are tired of having their homes broken into. Tired of going to their businesses early in the morning and finding feces by the front door, water running out back — or worse.
And no one pulls into a convenience store parking lot hoping to encounter an aggressive panhandler.
What happens when people are frustrated?
They complain to friends and neighbors and on social networks such as Next Door. They call into talk shows and write letters to the editor. And they ask their city councilmembers, “Why aren’t you fixing this?”

That, folks, explains the Fresno City Council’s adoption of a no-camping ordinance last month and Thursday’s initial but unanimous approval of regulations that would close 16 of the city’s 22 recycling centers.
The first has nothing to do with camping and the second isn’t about recycling — except that some recycling business employees will lose their jobs.
Both will prove to be futile attempts to crack down on the behaviors of Fresno’s chronically homeless population. Both are examples of politicians addressing the symptoms of a problem instead of the cause of the problem.
The no-camping ordinance won’t be enforced for myriad reasons. The biggest is that Fresno’s undermanned police force has its hands full with violent criminals, investigating serious crimes and answering an endless stream of calls for service.
Shuttering the recycling centers could produce an increase in burglaries and petty thefts. No longer easily able to turn cans and bottles into pocket money, some homeless people and substance abusers will look elsewhere to raise cash. Like your front porch, garage or backyard.
The impacts of homelessness can’t be solved by government — regardless of how many billions of dollars our federal, state and local governments throw at it.

That’s because, as Alan Graham of Mobile Loaves & Fishes in Austin, Texas, explains, “The No. 1 issue in homeless is the safety net of family has blown apart and put the people in the streets. The housing first approach will never solve homelessness because what people need more than a house is a family.”
Perhaps you are thinking that Graham sounds like an ivory tower professor and has no clue what he’s talking about. If so, you would be 100% wrong.
Graham got his education on homelessness issues in the streets and camps of Austin. A successful commercial real-estate developer, he once subscribed to the idea that he who dies with the most toys wins.
Then he began a religious exploration that resulted in his commitment to living the words of Christ by serving homeless people. He solicited donations from wealthy friends, formed a group and set out to make a difference. Eventually, he met Houston Flake, a veteran of Austin’s homeless encampments.
“Here we were, five white guys from the conference room overlooking the (Texas) Capitol and thinking we were going to save the world. I met Houston, and he said, “Why don’t we visit my conference room?”
It was on these trips into the homeless camps hidden by trees and other vegetation that Graham says he learned about the power of community, mutual respect and restoring dignity. He realized that you have to ignore the dirty clothes and unwashed skin and see the person.
Learning to get past the stereotypes of homeless people, Graham says, “is one of the greatest gifts I’ve ever been given. How can we look at anybody on the street and not see His image?”

Graham came to other realizations. Some homeless people prefer life on the streets because it’s where their community is. And homeless people often are entrepreneurial. He took all he learned and turned it into Mobile Loaves & Fishes, which provides food and clothing to the community out of catering trucks. That begat Community First! Village, a 27-acre community for the chronically homeless.
The $17 million village is master planned. It has 120 micro-homes, 100 RVs and 20 canvas-sided cottages. Residents pay rent. Many of them earn their rent money by making items in the blacksmith shop, woodshop and other craft facilities. There is medical care on site. The amenities include walking trails, community gardens, WiFi and an outdoor movie theater.
I want to be clear: The village is up and running. It is reality.
Plans are in the works to develop an adjacent 24-acre property that would bring the village’s capacity to 600 residents.
Private donations have accomplished all of this, and Graham says that private money will build the second site, too.
In many ways, Graham is like the late Mike McGarvin, who founded Fresno’s Poverello House. The difference is, Graham — because of his wealth, connections and business expertise — was able to rally the community and overcome the political hurdles to see his initial dream realized and new goals fulfilled.
What Austin has, Fresno can have, too.

Leaders Should Learn About Alternatives

The first step is for Mayor Lee Brand and a council member or two to board a jet and check out Community First! Village. Everyone should watch the video accompanying this column. It was made before the village was completed, but it tells the story of restoring broken people (“God’s estranged children,” in Graham’s words).
The stereotypes and half-truths about homelessness must be knocked down in Fresno. Letting innovation flourish in concert with widespread community involvement is the best way to help people down on their luck or dealing with mental health issues get off the streets.
Waiting for the federal government to dole out dollars to build expensive housing that isolates people isn’t the answer.
Neither is passing ordinances that will only temporarily satisfy community anger about this vexing problem.
Book that flight, Mayor Brand.

How Do You Like Your SNL: With or Without Politics?