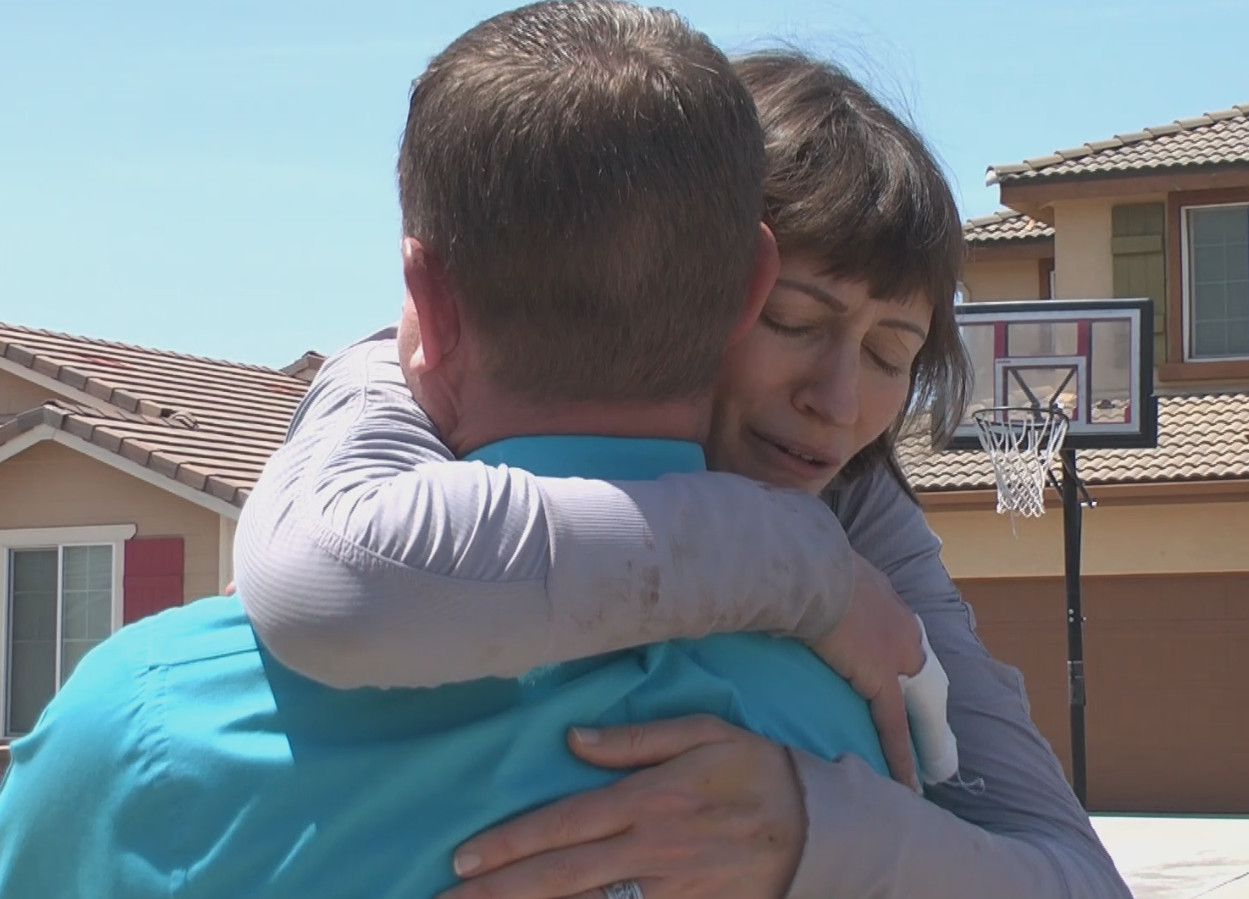 Every morning, Cara Emes takes her cocker mix Gus for a walk in her neighborhood. But what she experienced was something no pet owner ever wants to go through. A pitbull, seemingly out of nowhere she says, attacked Cara and her dog. A Good Samaritan, who happened to be a sheriff’s detective on his way to work, made the save.

It happened in a residential neighborhood Wednesday (May 10) near Shields & Temperance in East Central Fresno.

“It was racing across the street towards us,” Emes described when recounting the even to a group of media. “We were in a struggle for a while.  I was trying desperately to get this dog off my 30-pound dog. My dog was screaming. I was screaming for help. There weren’t any neighbors around. There was just no one around.”

Cara’s screams for help pierced the quiet of the morning.  A dog attack was an unusual occurrence in a normally quiet neighborhood. Things were looking bleak.

“I thought to myself that my dog was going to die in this moment,” Cara said, fighting back tears, “and I couldn’t stop it. I got bit and punctured a few times. I felt nothing because I’m trying to get this dog off my dog. I don’t know this dog seemed single focused and for whatever reason, seen my dog and lost it.

But this isn’t a story about dangers of any particular breed. Rather it is the serendipitous nature of this man, Fresno Sheriff’s Detective Jeff Stricker.

“Everything happens for a reason. Right place, right time,” says Stricker, who happened to be driving to work in the neighborhood and heard Emes screams for help. “Everyone says ‘where’s a cop when you need one?’ Well, there was one here.”

Stricker was able to pry the pitbull off Gus. A neighbor then provided rope to tie the pitbull up until Fresno police could arrive.

Stricker’s mere presence may have not been the only sign of fortune. Strickler used to be a dog handler prior to moving to Internal Affairs.

“That is why I felt comfortable coming up to the dog and handling it. I don’t know if other officers would have had that same training or felt comfortable to put hands on a dog like that,” Stricker said.

Cara suffered some cuts and scratches. The dog had to undergo surgery at the vet. The blood stains remain on Cara’s shirt. She isn’t sure if it is hers or Gus’s.  But she is thankful that a Stricker, who happened to be in the neighborhood on his way to work, was there.

Hours after the incident, Emes and Stricker met again when speaking to the media. Emes thanked Stricker with a big hug.

The pitbull is now in custody of the SPCA, where it will stay for 10 days before its fate is determined. No owner, if any, has come forward.

[author’s note: this is a personal story from me. The attack literally happened around the corner from where I live. I walk my own dog along that same street every day.]