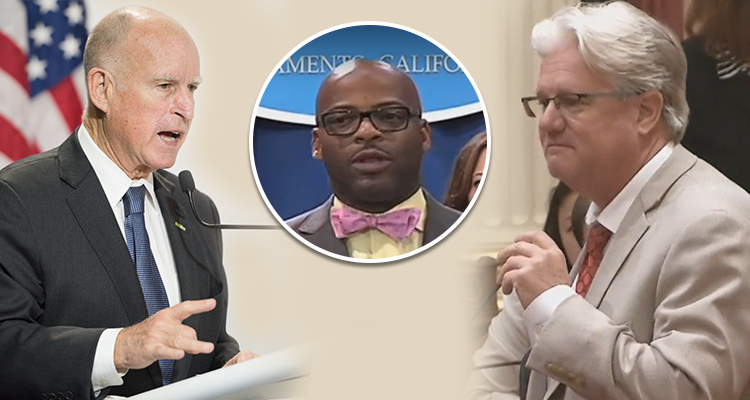 State Sen. Andy Vidak (R-Hanford) is turning the pressure on to prevent Isadore Hall from being confirmed to the Agricultural Labor Relations Board (ALRB). After letters to two separate senate committees failed to produce results, he has now going straight to the top in the form of a letter to Gov. Jerry Brown.

“I am writing to request that you immediately withdraw your appointment of Agricultural Labor Relations Board (ALRB) member Isadore Hall,” Vidak wrote. “Hall’s widely reported behavior as an ALRB member since your appointment of him in January has been highly offensive, inappropriate and probably criminal.”

Vidak accused Hall of confronting farmers at a Sacramento hotel the night before his confirmation hearing from the Senate Rules Committee. In that meeting, Hall allegedly said he would “get” farmers that opposed him.

A day later, the committee gave the preliminary thumbs up by a 3-0 margin (Valley Republican Senators Anthony Cannella and Tom Berryhill did not lodge a vote; the former abstained and the latter was absent). The three yes votes came from Democrats.

George Radanovich, the president of the California Fresh Fruit Association, spoke against Hall’s confirmation at the March 1 hearing. He confirms that Hall approached himself and CFFA board members the evening before that Vidak references. However, Radanovich would not disclose to GV Wire the nature of such conversations.

Vidak first wrote a letter to senate president and chairman of the rules committee Kevin de Leon, asking for a pause on Hall’s confirmation process until the allegations could be investigated. Vidak claimed de Leon told him that things had been worked out among senate leadership and the CFFA and confirmation would move forward.

That prompted Vidak write a second letter, this time to the Senate Ethics Committee, asserting that the CFFA and senate leadership were conspiring to confirm Hall. Radanovich bristled at the accusation. The former Valley congressman says that is not true and his group opposes Hall’s nomination.

Ever since Brown nominated Hall to the ALRB, it has caused a backlash among conservatives and farm groups. Both feel his lack of qualifications and perceived bias towards farm workers make him unfit for the job.

Hall is a former state legislator from Compton. He has held elected office at the local school board and city levels before voters sent him to Sacramento. He ran for congress last November, but lost. During his testimony at the March 1 rules committee, Hall said he would come into the position with an open mind.

Hall still requires full confirmation from the entire senate. It was expected to take place this week, but no vote happened even though it is on the senate’s agenda. They reconvene in session on Monday (April 3) at 2 p.m.