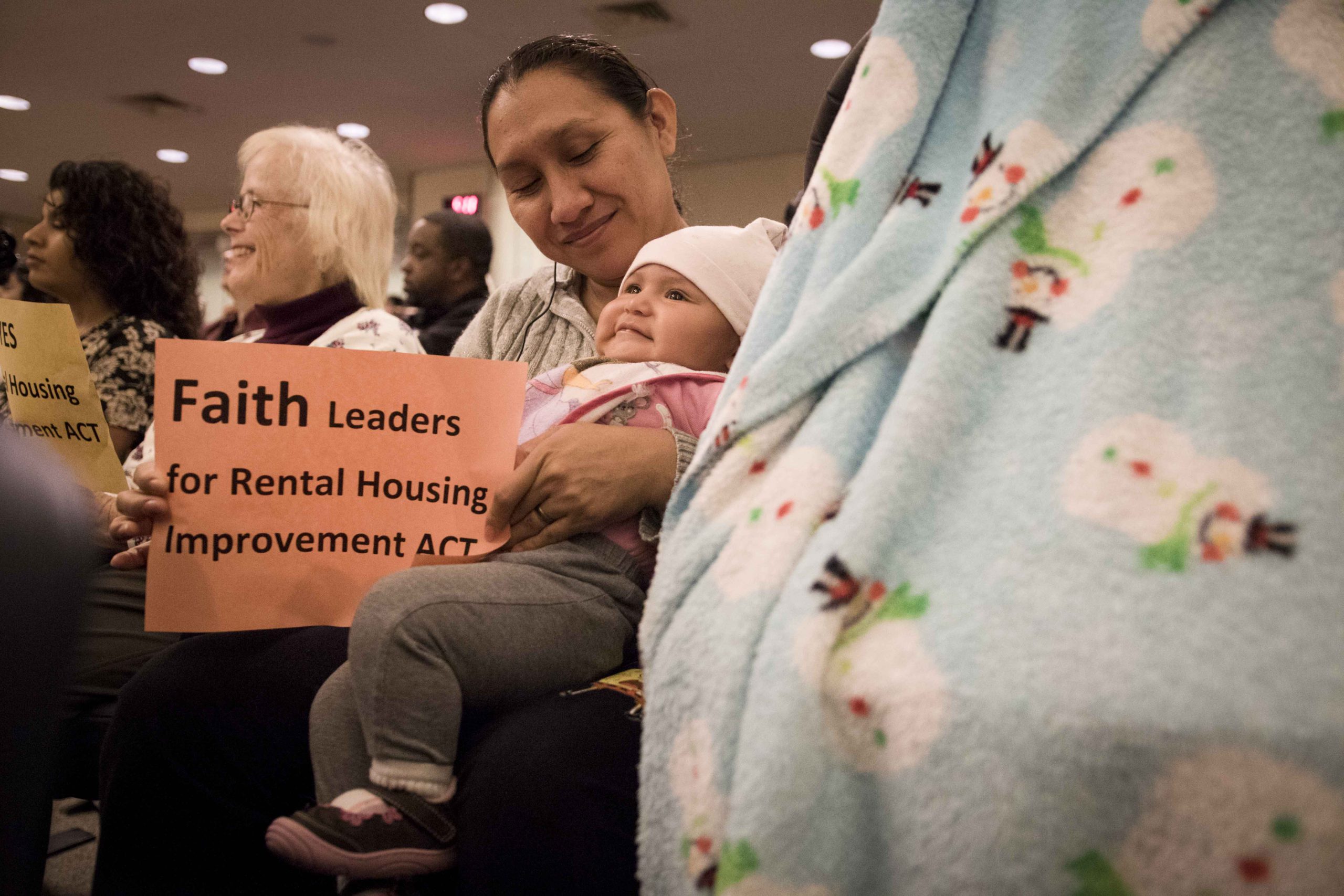 [Note: check back Friday for video]

Minutes after the Fresno City Council passed a rental inspection ordinance, sounds of joy emanated from the lobby, a circle of activists cheering and hollering. Tenants’ rights attorneys, Faith in Fresno leaders and others celebrated a long-fought victory.

Slumlords in the city isn’t new. But, it wasn’t until the Summerset Village disaster of November 2015 and a subsequent Fresno Bee series of reports that brought the issue of inadequate housing to light. In response, City Hall created task forces, and proposed other measures. But, it wasn’t until Lee Brand took the mayor’s office before anything happened. 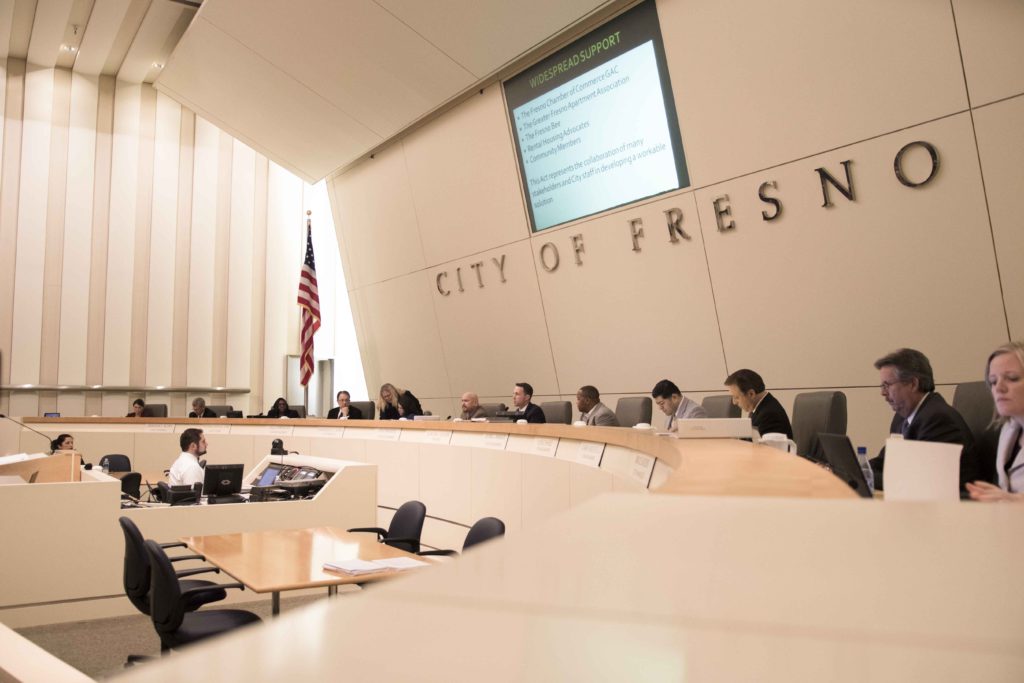 Fresno City Council had an open forum meeting for community members to discuss their concerns on the Apartment Inspections Act on February 2, 2017. The council voted in favor with a 4-3 vote. Photo by Roe Borunda / GV Wire

By a 4-3 vote, all landlords will have to register their collective rental units (an estimation of 85,000) with the city. Then, a sampling of each apartment complex will be inspected. The goal is to target the known slums first. There is no estimation how long initial inspections will take.

When asked about a budget for such an operation, Brand told a scrum of media, “to be determined.”

As anticipated, a large standing-room only crowd gathered Thursday (February 2) in the late afternoon to see how council would finally vote. Dozens of speakers took nearly two hours to testify in public comment. No one outright rejected the inspection ordinance. Many spoke of stories of living in substandard housing. Advocates from groups like No More Slumlords, Faith in Fresno and FIRM talked about the need to protect those who may not be able to defend for themselves. 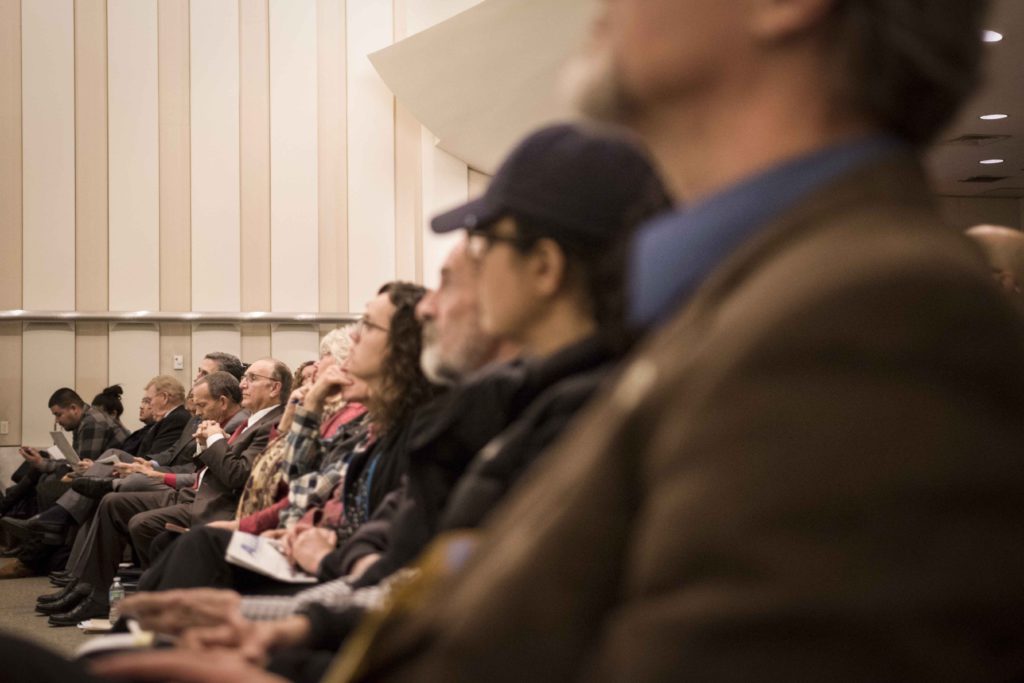 Landlords also spoke. Generally, they agreed something needed to be done about property owners who shirk their legal and moral obligations. But, they didn’t want to be lumped in with the bad apples. Some asked for a delay. After a postponement from December, there was no chance that was going to happen. Councilman Oliver Baines noted the rareness of both sides of the issue somewhat agreeing with each other.

The main argument against passing the ordinance came from the council’s conservative bloc: Clint Olivier, Steve Brandau and Dr. Garry Bredefeld. All cited concerns with the mandatory inspections and how that conflicts with the 4th Amendment of the United States Constitution. In brief, that requires a judge to sign a warrant to allow the government (i.e. city inspectors) to enter a home on probable cause.

Olivier brought up the unintended consequences of an ordinance with good intentions. At one point, he proposed an amendment that would allow tenants to opt out if the city came knocking. Asked for clarification from the city manager and attorney, both said a court would probably rule in Fresno’s favor. With that Olivier, who this week announced his intentions to run for state Senate in 2018, retreated and withdrew his motion. 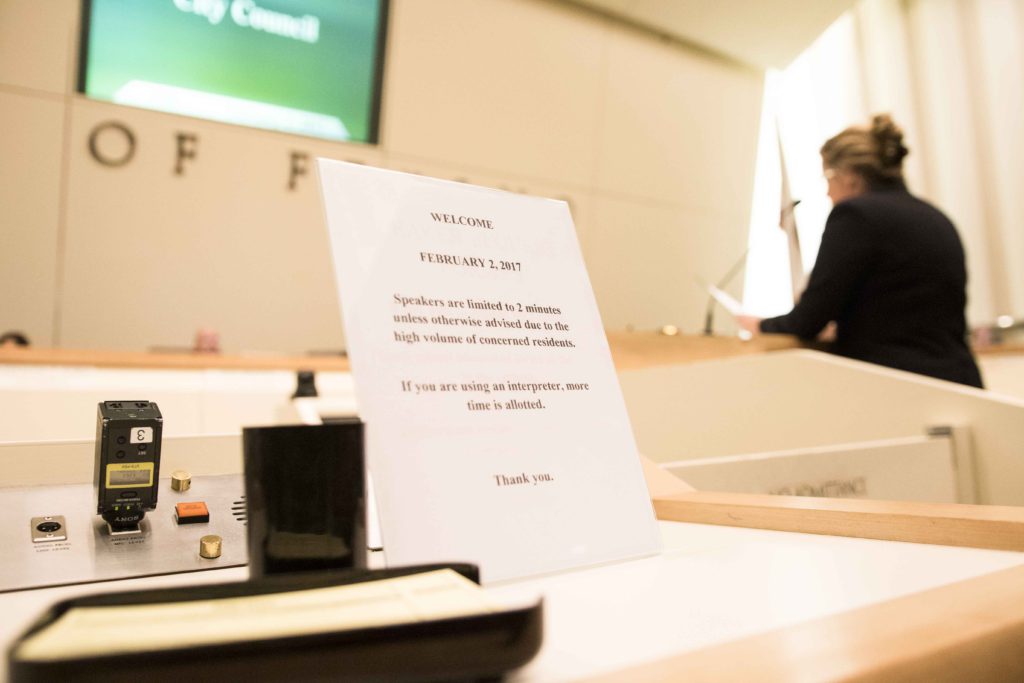 During the apartment inspection testimonials, community members were given a two-minute time limit when speaking to the council on February 2, 2017. Photo by Roe Borunda / GV Wire

Others in the audience found the claims dubious. GV Wire spoke with attorney Ashley Werner, an advocate who pushed for the rental inspection unit to be passed. On Twitter, she posted this:

@AshleyEWerner the answer may be too nuanced for twitter, but no rental inspections are not “barred”. See Camara v. Municipal Ct.

However, that case from San Francisco in 1967, affirms that a city would need a warrant to conduct an inspection for a tenant who refuses.

The vote was academic:

Once inspections do get rolling, the city will charge landlords $100 per inspection. There are some exemptions to who will be visited by an inspector (units under 10 years or who are already inspected by another agency are off the list, but must still register). Based on the findings of that initial inspection, units will be placed in three tiers. Tier 1 is the best, meaning they passed and are clear for another five years. Tier 2 means failing the first inspection and subsequent re-inspection, but the violations are minor. In that case, instead of inspectors sampling some of the units of a given complex (for instance, 10% of an 80-unit building, or just eight inspections), all units would be inspected. If that passes, they are good for two years.

Tier 3 is for the true slumlords. If those units continue to fail inspection, and the landlord is behind on fees, taxes,etc., all units will be inspected every year.

4-3! Now let’s implement with urgency – our tenants and our city are counting on it. Thanks to @MayorLeeBrand for keeping your promise. pic.twitter.com/xaoznfTJVn

However, the ordinance says inspections won’t start for seven months, until September 1, 2017, in order to develop an inspection plan and hire staff. That also may allow time to create a budget for such an operation (that takes place in June).